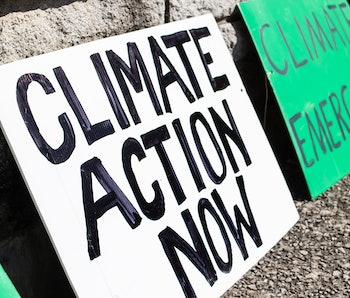 On Monday, the United Nations’ Intergovernmental Panel on Climate Change (IPCC) released the second part of their sixth assessment report. The comprehensive analysis focused on how the climate crisis is affecting human health and ways we might still be able to adapt.

The new findings reveal both the urgent need to immediately tackle the climate crisis as well as our limited ability to adapt to global warming. In short: We’re running out of time to save our future.

“Any further delay in concerted anticipatory global action...will miss a brief and rapidly closing window of opportunity to secure a liveable and sustainable future for all,” the new report notes.

Here are the seven key points from the groundbreaking report.

7. Every degree (or less) of global warming matters

In the Paris Agreement in 2015, world leaders stressed the need to “limit global warming to well below 2, preferably to 1.5 degrees Celsius.” Average global temperatures have risen roughly 1.1 degrees Celsius since pre-industrial times. Each degree rise in global warming further increases the risks of adverse effects — such as extreme weather events — from climate change.

According to the new report, we have an even more urgent need to curb greenhouse gas emissions and limit further global warming to 1.5 degrees. In places like the Amazon — long heralded as the world’s “lungs” — climate change and land development will “result in irreversible and severe losses of ecosystem services and biodiversity at 2°C global warming.”

Exceeding 1.5 degrees in warming will also result in irreversible impacts on polar, mountain, and coastal ecosystems, places that are particularly susceptible to climate change. Our ability to adapt to climate change (mostly through development in renewable energy) is also most effective at lower levels of warming.

Furthermore, some ecosystems, such as coral reefs, are approaching their limits to adaptation already under our current warming, and may not be able to adapt as global warming increases.

“Above 1.5°C global warming level, some ecosystem-based adaptation measures will lose their effectiveness in providing benefits to people as these ecosystems will reach hard adaptation limits,” writes the IPCC.

6. Human health is at risk

As climate change continues, food, water, and animal-borne diseases are already on the rise. These zoonotic diseases are emerging in new areas — a highly relevant concern as the Covid-19 pandemic is still ongoing.

With the rise of global warming, water insecurity also poses a threat. Under a potential future scenario of extremely high warming — 4 degrees Celsius — 10 percent of the global land area will experience increases in extreme water fluctuations from rivers. Roughly half the world's population already experiences seasonal water scarcity due to climate change and other factors.

“Challenges for water management will be exacerbated in the near, mid, and long term, depending on the magnitude, rate, and regional details of future climate change,” the IPCC report concludes.

Finally, the IPCC also assesses the impact of climate change on mental well-being in different regions. The report concludes:

“Mental health challenges, including anxiety and stress, are expected to increase under further global warming in all assessed regions, particularly for children, adolescents, elderly, and those with underlying health conditions.”

The report also takes a comprehensive look at the 3.3 to 3.6 billion people who are highly vulnerable to climate change.

It’s no great surprise that the effects of global warming hit the most marginalized communities the hardest. Lack of financial resources and access to climate decision-makers also makes it more difficult for these communities to adapt to climate change.

Marginalized groups include Indigenous peoples, ethnic minorities, women, low-income households, and unhoused people or individuals living in informal settlements. People living in developing countries are also more likely to bear the brunt of climate change due to patterns of global inequity and the history of colonialism, according to the report.

Geography also plays a significant role in determining whom climate change affects the most. People living in low-lying islands, coastal areas, mountainous regions, near permafrost, or glaciers will also be affected due to factors like sea-level rise and climate-dependent livelihoods. Individuals in such vulnerable areas — especially ones with fewer resources to adapt — are more likely to experience “involuntary migration” as a result of global warming.

“Global hotspots of high human vulnerability are found particularly in West-Central- and East Africa, South Asia, Central, and South America, Small Island Developing States and the Arctic,” according to the IPCC.

In North America, some of the most adverse effects of climate change include water security issues due to intensified drought, displacement from wildfires, crop losses, and agricultural shifts, but especially sea-level rise.

“Even if global warming is limited to 1.5 degrees Celsuis, human life, safety, and livelihoods across North America, especially in coastal areas will be placed at risk from sea-level rise,” a fact sheet on the report states.

4. Human well-being and ecosystems are interconnected

The climate crisis and the biodiversity crisis — the rapid loss of animal and plant species in recent years — are inherently linked. This report makes clear the connection.

“Climate change has caused substantial damages, and increasingly irreversible losses, in terrestrial, freshwater and coastal and open ocean marine ecosystems,” according to the report.

Roughly half of the species studied in the report have moved to higher elevations or migrated towards the poles to find habitats less vulnerable to climate change. Hundreds of species have been lost to the world as increasingly extreme temperatures batter their native habitats.

But the report also links the devastation of climate change on biodiversity and ecosystems to human health. One example the report mentions is the impact of ocean warming — and subsequent acidification of oceans — on seafood production, which increases food insecurity.

“Loss of ecosystems and their services has cascading and long-term impacts on people globally, especially for Indigenous Peoples and local communities who are directly dependent on ecosystems to meet basic needs,” according to the report.

3. Cities have a big role to play

“Costs for maintenance and reconstruction of urban infrastructure, including building, transportation, and energy will increase with global warming level,” writes the IPCC.

Coastal cities are especially significant since 896 million people — nearly 11 percent of the world’s population — live in low-elevation coastal areas vulnerable to rising sea levels. The report further states that the population exposed to once-in-a-hundred-year floods will increase by 20 percent under a 0.15 meter — or half a foot — rise in sea levels.

Therefore, urban areas will also be “critical” to developing climate adaptation plans, according to the report. Urban areas’ adaptations impact rural communities indirectly as well due to cities’ role in global supply chains and national economies. At least 170 cities have included climate adaptation strategies in their planning processes, but the report says such climate adaptations often prioritize short-term over long-term climate risk and lack effective oversight of implementation.

2. We can adapt to climate change

Some ecosystems — including coral reefs, coastal wetlands, some rainforests, and some polar and mountain ecosystems — are “already reaching or surpassing” the limits of their ecosystem’s ability to adapt to climate change. Small island communities will find it difficult to adapt to even 1.5 degrees of warming due to sea level rises.

We also need to take care not to enact climate adaptations that do more harm than good, such as planting swathes of trees in areas that historically lack forests such as savannahs or grasslands. Other climate adaptation strategies prioritize short-term benefits but exacerbate long-term climate risks, such as fire suppression in fire-adapted ecosystems and building seawalls.

Still, the report is generally optimistic about the potential for humans to develop climate change adaptation measures. Potential climate adaptations — some of which are already in effect — include disaster warning systems, adapting health systems, generating resilient energy systems and green infrastructure, improving soil conservation and irrigation on farms, and developing sustainable land use and water management policies. But we must act much more quickly and focus on “transformational” rather than incremental adaptations.

“Many initiatives prioritize immediate and near-term climate risk reduction, which reduces the opportunity for transformational adaptation,” writes the IPCC.

1. Climate-resilient development is the way forward

The report’s findings are dire, but there’s one way we can still secure a sustainable future that reduces impacts on human health: climate-resilient development.

But the ability to achieve such development becomes more difficult if we exceed 1.5 degrees warming, sending a clear message for humans to act now to curb global warming.

“Climate change is a threat to human well-being and planetary health,” conclude the report authors.