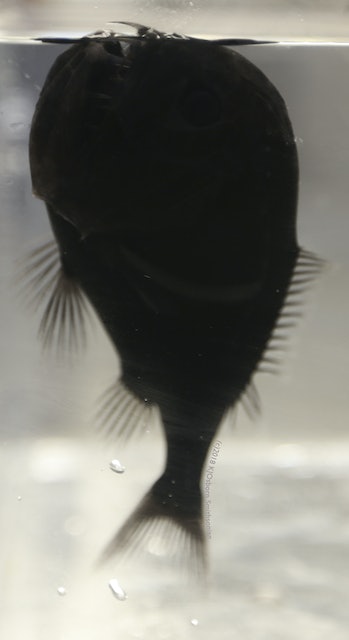 One of the Earth's blackest materials is a living creature found more than 600 feet beneath the ocean's surface, new research reveals.

Deep in the ocean, sunlight is nearly nonexistent. Instead, bioluminescent organisms light up the water. Because of these under-the-sea light shows, marine animals have to find ways to camouflage.

Recently, scientists discovered that 16 species of deep-sea fish — some of them distantly related — camouflage with the help of skin that appears ultra-black, reflecting less than 0.5 percent of the light that hits it. These fish are more black than black paper, black electrical tape, and new car tires.

While the benefit of hiding from predators is an obvious benefit to the fish sporting ultra-black skin, a better understanding of the skin's properties can also inspire innovative technology. The study authors predict their findings could lead to developing better ultra-black materials — useful for building telescopes, cameras, and camouflage materials.

The findings were published on Thursday in the journal Current Biology.

Finding fish — Lead study author Karen Osborn, a zoologist at the Smithsonian, studies invertebrates. But for years, in her research, she kept coming across black fish that she couldn't quite photograph — Osborn tells Inverse that time and again, she could only capture their silhouette.

This perplexing scenario inspired a research side-project: Osborn decided to capture samples of the fish and examine them. Once she had them, she noticed a peculiar structural pattern in their skin: A distinct arrangement of melanin, a pigment that's also found in human skin.

Melanin is stored and transported by organelles called melanosomes. The distribution of melanosomes in the fish is unique: They're concentrated near the surface of the skin, in a thin layer. That protective layer means that the small fraction of incoming light that does get reflected will likely bounce into another nearby melanosome.

"Typically that light would bounce back out, and that would give away the position of the fish," Osborn explains. But neighboring melanosomes stop the light from leaving the layer.

"They've created, effectively, a structural light trap, but they've done it just using the shape of the pigment that's in there — which is so cool, and so efficient," she explains.

Thanks to their special skin, these fish appear basically invisible in the black open water of the ocean. That helps them hide from predators and catch their own prey since the area is devoid of kelp or reefs to provide cover.

In the lab, Osborn carefully positioned strobe lights to photograph the fish. She was finally able to capture the fish in detail, including this Pacific Blackdragon:

Hunting for the blackest materials — Scientists have discovered other ultra-black animals that use special pigments for a survival advantage.

Birds of Paradise, which live mostly in Papua New Guinea and eastern Australia, have ultra-black feathers that absorb around 99.95 percent of light, similar to these deep-sea fish. Meanwhile, at least 10 species of butterflies absorb nearly all of the light that hits certain parts of their wings, making their brightly-colored wing parts stand out — a big help in the mating game.

In non-animals, researchers have been able to exceed the amount of light absorbed by a material's surface. Engineers from MIT created a material out of tiny carbon fibers which captures more than 99.96 percent of light. Even with the new discovery of ultra-black fish, that material holds the record for most light absorbed.

Still, the unique melanosome arrangement puts the fish in a new category — Osborn reports that it hasn't been seen before in nature.

The fact that very similar traits exist in totally unrelated fish — across the entire diversity of fishes — is also a great example of convergent evolution, Osborn says.

There are tiny structural differences between how the different fish arrange melanosomes. But posed with the challenge of finding a place to hide in open, dark water, various lineages of fish have evolved to trap light efficiently.

"We can see that they've come at it from different ways," Osborn explains, "but they've all arrived at the same solution to the problem."

Abstract: At oceanic depths >200 m, there is little ambient sunlight, but bioluminescent organisms provide another light source that can reveal animals to visual predators and prey [1–4]. Transparency and mirrored surfaces—common camouflage strategies under the diffuse solar illumination of shallower waters—are conspicuous when illuminated by directed bioluminescent sources due to reflection from the body surface [5, 6]. Pigmentation allows animals to absorb light from bioluminescent sources, rendering them visually undetectable against the dark background of the deep sea [5]. We present evidence suggesting pressure to reduce reflected bioluminescence led to the evolution of ultra-black skin (reflectance <0.5%) in 16 species of deep-sea fishes across seven distantly related orders. Histological data suggest this low reflectance is mediated by a continuous layer of densely packed melanosomes in the exterior-most layer of the dermis [7, 8] and that this layer lacks the unpigmented gaps between pigment cells found in other darkly colored fishes [9–13]. Using finite-difference, time-domain modeling and comparisons with melanosomes found in other ectothermic vertebrates [11, 13–21], we find the melanosomes making up the layer in these ultra-black species are optimized in size and shape to minimize reflectance. Low reflectance results from melanosomes scattering light within the layer, increasing the optical path length and therefore light absorption by the melanin. By reducing reflectance, ultra-black fish can reduce the sighting distance of visual predators more than 6-fold compared to fish with 2% reflectance. This biological example of efficient light absorption via a simple architecture of strongly absorbing and highly scattering particles may inspire new ultra-black materials.