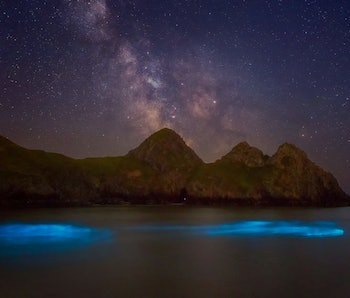 Bioluminescence — the ability of a creature to emit light from its body — may seem incredible, but it’s commonplace in the ocean: One recent study found that 76 percent of ocean life has this power. What’s rarer is a human witnessing marine bioluminescence from above the water; but a Welsh photographer got this privilege on Sunday night and documented the amazing sight for the world to see.

Alyn Wallace had heard that bioluminescent plankton were active in a bay off the coast of Swansea, a southern county in Wales that borders the Bristol Channel. He arrived, camera in hand, and wasn’t disappointed: Multitudes of plankton glimmered in the bay under a clear, starry sky. Even his description of the evening is lovely; he called it “one of the most incredible experiences of my life”:

“I meandered through dark woodlands and waded across a crab infested estuary to get to this spot where bioluminescent plankton were lighting up the shores. Every step and splash I made just lit up with an unreal blue glow.”

Many types of plankton glow; they do so to alarm predators, which is why they reacted to the disruptive movement of Wallace’s steps.

The light comes from a molecule called “luciferin,” which every bioluminescent creature possesses. When the luciferin is oxidized (combined with oxygen) and catalyzed (with plankton’s luciferase enzyme), the luciferin is excited into a higher energy state, causing it to glow while it decays back into its ground state.

Most bioluminescent plankton are blue, because that’s the color that can be seen from the farthest distance away in water. Marine creatures are also usually best at processing blue-green light (they frequently can’t even detect violet, red, or yellow), so blue is the most effective color for deterring marine predators.

Glowing plankton can often be spotted in Wales, but they’re generally only in the north of the country. They’re most common in warm water, so right now — summer — is Welsh bioluminescent plankton prime time.

Bioluminescence is a pretty cool phenomenon (relatedly, so is biofluorescence). As humans are wont to do, we’ve grown to manipulate it for our own purposes, even making glow-in-the-dark golf trees. Hey, we’re not going to let plankton be cooler than us.

More like this
Science
Sep. 23, 2022
Just how smart are raccoons? They’re probably masterminds, a new study finds
By Elana Spivack
Science
Oct. 5, 2022
The secret to saving our planet may be lurking in the dirt under our feet
By Tara Yarlagadda
Science
Oct. 1, 2022
Ancient humans forged hybrid species at critical periods in our evolution
By Penny Spikins and The Conversation
Related Tags
Share: