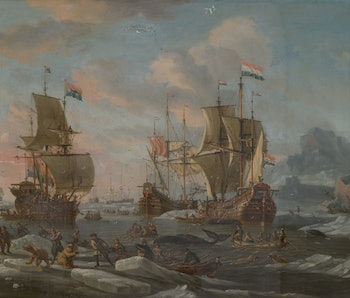 Artifacts are lonely. Imagine being centuries past your prime, spending all that time living oceans away from your home country, or buried down in dirt, or in sand. It’s tough out here for an artifact. The next time you come across one in a museum, or if you’re lucky, on your next seashell hunt, take a moment to reflect on these things that have been in the world much longer than you.

And if a museum trip is just not in this week’s cards, then look no further than today’s newsletter to ponder the past. Today’s email has incredible footage of a 186-year-old shipwreck, information about the start of human evolution, Mayan calendars, and more. But before you time travel, vote for Inverse Daily in this year’s Webby Awards — we are so grateful for your support.

This is an adapted version of the Inverse Daily newsletter for Monday, April 18, 2022. Subscribe for free and learn something new every day.

“Commercial whaling was once a booming industry in New England,” writes Inverse card story editor Jennifer Walter. “In the 17th and 18th centuries, people hunted whales and used their blubber as a lubricant for machinery, and their bones to make various light-but-sturdy objects.”

Even at the height of an industry, when you’re out on stormy waters, accidents happen and ships sink. One lost whaling ship includes Industry, a brig built in 1815 that lived out its purpose for 20 years. It reached a brutal end in 1836, when a storm tore its body apart, but now Industry gets a shot at ghosthood — the National Oceanic and AAtmospheric Administration just found its remains in the Gulf of Mexico.

“All the wooden remains of Industry have deteriorated,” Walter notes, “but significant pieces, such as a cast iron stove called a tryworks, are still intact.” You can see the gnarled metal artifacts the ship left behind and learn more about its crewmates (who survived the wreck!) by clicking through the card story.

Where and when did humans evolve?

While we’re time traveling, let’s revisit the top of Homo sapiens history. Though researchers have struggled to answer why humans seem to dominate Earth, a new study suggests climate shifts played a role in our ascension.

While there are “competing theories of human evolution,” writes Yarlagadda, “the new research offers significant support for the variability selection hypothesis, which proposes that early hominin evolution and speciation were influenced by significant shifts in temperature and precipitation levels.”

The Mayan calendar is older than we thought, researchers say

Let’s move forward in time — “writing in the journal Science Advances this week, researchers analyzed painted plaster fragments from an ancient Maya pyramid in modern-day Guatemala,” writes Jennifer Walter. “They discovered the earliest evidence of a written calendar date, along with intricate calligraphy that sheds light on the evolution of Maya writing systems.”

Radiocarbon dating places that date fragment, “7 Deer,” somewhere between 300 and 200 B.C, making it the “earliest confirmed example of a calendar date found at a Maya site,” Walter writes. Since the artifact was found in the crumbs of San Bartolo, an early Mayan town but not a bustling capital, experts believe it indicates that Mayan calendars were around for centuries prior to its creation.

“The origins of the Mayan calendar provoke many mysteries, some of which could be cleared up through further research of the 7000 fragments,” writes Walter. “For the time being, we know that the Maya were far more capable in the Preclassical period than we might give them credit for.”

Three years ago, we got the first-ever image of a gargantuan black hole

Just three years ago, “the first black hole image to ever be taken stunned the world,” writes Inverse science reporter Doris Elín Urrutia. “In the picture — painstakingly constructed by 200 researchers from eight telescopes performing four nights of research to capture six petabytes (1 million gigabytes) — we see a glowing ring and stark shadow marking an edge of no return.”

“Beyond this threshold, known as the event horizon, the black hole produces a dark region in space where not even light can escape its grasp,” Urrutia continues. Photographing a black hole is as impressive as it is rare. For the blazing image, Event Horizon Telescope researchers had to take signals from eight, globally-located radio telescopes and synthesize the data for an image.

“This Earth-scale is necessary because while black holes are frighteningly powerful and massive, they are physically very small,” writes Urrutia. “The bigger the telescope, the smaller the object that scientists can observe.” Next, scientists hope to capture the Milky Way’s pinprick black hole, Sagittarius A*.

More like this
Science
Jan. 22, 2023
Humans didn’t evolve to live in cold — our survival is a lesson in ingenuity
By The Conversation, Kyoko Yamaguchi and Laura Buck
Science
Jan. 26, 2023
Lab-grown chicken could hit store shelves soon — here's how it tastes
By John Wenz
Science
Jan. 23, 2023
Elephants could be key to saving the planet — here’s why
By Tara Yarlagadda
LEARN SOMETHING NEW EVERY DAY.
Related Tags
Share: