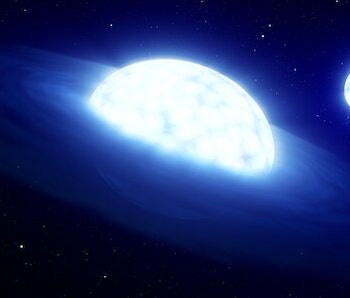 In 2020, Thomas Rivinius and his colleagues made a record-breaking discovery by locating the closest black hole to Earth.

The black hole was reportedly just 1000 light-years away in the HR 6819 system. However, pinpointing a compact region of space where no light escapes from can be tricky, and the discovery was met with skepticism.

“We knew it was a strange and funny system,” Rivinius tells Inverse. “We had two competing hypotheses, so we did follow-up observations to sort out who was right.”

After obtaining new, sharper data, Rivinius’ team and their contenders agreed that this was no black hole, but rather an odd, two-star system where one star is a so-called “vampire.” The team details their new findings in a study published Wednesday in the journal Astronomy and Astrophysics.

HERE’S THE BACKGROUND — The team behind the initial discovery was originally observing a binary star system called HR 6819 when they began noticing evidence for a third, invisible object.

The two stars seemed to orbit the third object periodically, every 40.3 days. And while they were unable to see the black hole itself, they were able to determine its presence based on the orbit of the star closest at the time to the invisible companion.

The team also noted that the black hole was rather boring — it did not accrete matter, meaning that it did not release any powerful X-ray emissions and was therefore completely dark, silent, and invisible.

But the discovery was scrutinized by other researchers, namely Julia Bodensteiner, then a Ph.D. student at KU Leuven, Belgium, who suggested that there was no black hole at the center of that system.

WHAT’S NEW — In order to settle the argument, Rivinius joined forces with Bodensteiner to conduct follow-up observations of HR 6819.

Using the European Southern Observatory’s Very Large Telescope (ESO’s VLT) in Chile, the researchers were able to obtain a clearer picture of the nearby system. Their previous observations only included spectroscopy — or the absorption and emission of light — but now they were also able to gather interferometry, which measures light and radio waves.

They already knew for sure that there were two sources of light in the system; now they had to observe whether they orbited close to one another or are far apart from each other.

The follow-up observations revealed two bright sources separated by only one-third of the distance between the Earth and the Sun, meaning there was no black hole in the middle. Instead, the system was made up of two stars on a 40-day orbit, with one of the stars having been stripped of its material by its companion star.

“It’s a binary star system that has history, it has evolved,” Rivinius says. “The second star must have started life as a normal star, but then something happened.”

One possible scenario is that as these nearby stars aged, they grew bigger, and got close to one another. One star sucked the material from another, causing it to lose a large fraction of its mass. After sucking all that material, the “vampire” star then began to spin more rapidly.

“This is the first system with such a recent episode where we can see the other star in a very unusual phase of of its life,” Rivinius says.

WHAT’S NEXT — The followup observations provide an interesting opportunity to study how stellar vampirism affects binary star systems, and how it affects the evolution of massive stars.

The researchers are planning on monitoring the system closely over time to better understand the different stages it will go through. They also have a number of other systems that may be black hole candidates, or stellar vampire systems, which they plan on observing further.

“What you're looking for is a star that moves a lot with a relatively short period and seems to have no obvious counterpart,” Rivinius says. “This is very exception, probably much more rare than any black hole binary system would be.”