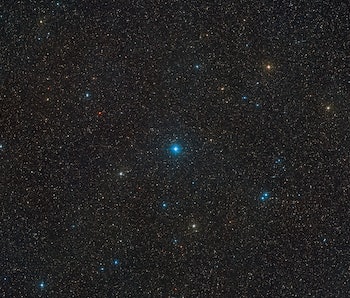 In our vast galaxy, scientists have spotted only a couple of dozen black holes.

However, based on the number of stars in the Milky Way, there could be millions, or billions, of these cosmic beasts lurking in the shadows. Some may be much closer than we think.

A team of astronomers at the European Souther Observatory (ESO) in Chile recently discovered the nearest black hole to Earth, located only 1,000 lightyears away from our planet. The black hole is part of a stellar system that's so close that it could be seen with the naked eye.

This discovery points to a whole population of black holes that could be hidden all around the Milky Way.

The study was published Wednesday in the Astronomy & Astrophysics journal.

However, the recent finding dates back to an observation more than a decade old. The team behind the new study was originally observing a binary star system called HR 6819 when they began noticing evidence for a third, invisible object.

The two stars seemed to orbit the third object periodically, every 40.3 day

Dietrich Baade, an astronomer at ESO, and co-author of the new study, revealed to Inverse how they determined, using a cosmic process of elimination, that this mysterious space body was a black hole.

The team's speculations were put on hold until the end of the year 2019, when they began to investigate it with further observations and reanalyze old data. And while they were unable to see the black hole itself, they were able to determine its presence based on the orbit of the star that's closest to the black hole.

The black hole is at a relatively close distance to Earth, astronomically speaking. And although the black hole itself cannot be seen with the naked eye since it's, well, quite dark, the orbiting stars are bright enough that they can be spotted from Earth.

The black hole is also not close enough that its gravitational pull poses any threat to Earth.

"Black holes are not vicious," Baade says. "They don't know about us, they're not after us."

Especially this black hole, which measures relatively small compared to others. The recently discovered black hole is only four times the mass of the Sun.

"As a black hole, it is the most boring thing you can imagine."

On the other hand, the supermassive black hole at the center of the Milky Way is 3.6 million times the mass of the Sun.

As it turned out, our neighboring black hole is quite tame. Baade is rather blunt in describing it: "As a black hole, it is the most boring thing you can imagine."

Unlike most black holes discovered, the one hidden in the HR 6819 star system does not accrete matter, meaning that it does not release any powerful x-ray emissions and is therefore completely dark, silent and invisible.

Black holes are formed in the aftermath of a supernova -- The death of a large star, one that is 25 times more massive than the Sun, will end in an explosive supernova. The remnants of that supernova end up forming a black hole, a massive amount of matter that is packed in a tight area of space.

Black holes grow gradually by absorbing matter from their surroundings. They form an accretion disk around them, which is usually what scientists spot in their observations of these massive, dark creatures.

However, the only proof of existence for the HR 6819 black hole is the gravitational pull it has on its surrounding stars, which are locked into a clockwise orbit around it.

"It’s growing very marginally, it must have had about the same mass since it formed," Baade says.

Black holes can continue to grow in size, but it's not necessary, Baade explains. Instead, their lack of growth is an indication of their surrounding environment, rather than the properties of the black hole itself.

Therefore, the black hole at the center of the binary star system is inactive because of the properties of its small, surrounding stars, and not due to its own properties.

The HR 6819 black hole is the first discovery of its kind, but that doesn't mean it's uncommon. The researchers behind the new study believe that there could be a lot more of these inactive black holes in the galaxy that are yet to be discovered.

"Because the Sun is not in a special position in the Milky Way, black holes of this kind must be common because of how close this one is to us," Baade says.

The team behind the new discovery think there could be hundreds of millions of undiscovered black holes out there, but that scientists are more equipped to find them now that they know what to look for.

Abstract: Several dozen optical echelle spectra demonstrate that HR 6819 is a hierarchical triple. A classical Be star is in a wide orbit with an unconstrained period around an inner 40 d binary consisting of a B3 III star and an unseen companion in a circular orbit. The radial-velocity semi-amplitude of 61.3 km/s of the inner star and its minimum (probable) mass of 5.0 M (6.3 ± 0.7 M) imply a mass of the unseen object of ≥ 4.2 M (≥ 5.0 ± 0.4 M), that is, a black hole (BH). The spectroscopic time series is stunningly similar to observations of LB-1. A similar triple-star architecture of LB-1 would reduce the mass of the BH in LB-1 from ∼ 70 M to a level more typical of Galactic stellar remnant BHs. The BH in HR 6819 probably is the closest known BH to the Sun, and together with LB-1, suggests a population of quiet BHs. Its embedment in a hierarchical triple structure may be of interest for models of merging double BHs or BH + neutron star binaries. Other triple stars with an outer Be star but without BH are identified; through stripping, such systems may become a source of single Be stars.