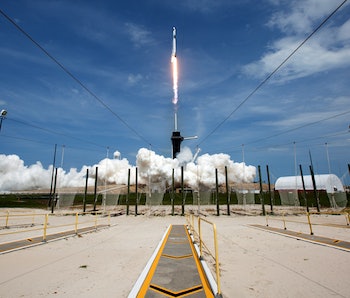 Launching a new age of human spaceflight in the United States, Elon Musk’s SpaceX can officially consider itself the first-ever company to send humans into space on a commercial spacecraft.

So without further ado, welcome. You’re part of the new era of space travel. As a member of the human race, SpaceX’s historic rocket launch could mean big things for you. After all, according to Elon Musk, “Human spaceflight was the reason SpaceX was created.”

On Saturday, May 30 at 3:22 p.m., history was made when SpaceX successfully launched the Crew Dragon capsule carrying NASA astronauts Bob Behnken and Doug Hurley — the first two people to fly in a SpaceX vehicle. And just like that, a new era of American space travel took flight. In the same moment Elon Musk had been working toward for over a decade, the launch revolutionized the American space program, and made traveling to the stars seem just within reach.

In a special episode of The Abstract, we recap SpaceX’s historic mission of the first crewed spaceflight to take off from US soil in nearly a decade.

For many Americans, Doug Hurley’s and Bob Behnken’s success into orbit on SpaceX's Falcon 9 rocket changed everything. Revving up the United States’ space program, #LaunchAmerica became the hashtag of the week at a time when we needed it the most.

Marking the end of a nine-year period in which the US had to rely on Russia to send astronauts to space, SpaceX’s success proved America is back in business and headed for the stars. As 2020 continues to be a year that tests American resilience, perhaps Elon Musk puts it best: “This event is something that all of humanity can get excited about. It’s just a fundamentally positive, good thing, and I think we need more good things in this world.”