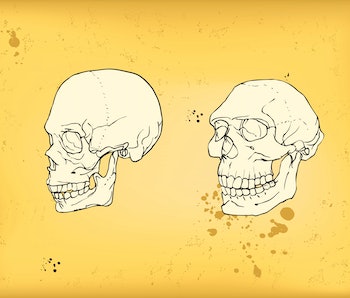 For years, scientists have tried to detangle the actors that played a role in human evolution's complicated story.

We know that our modern human ancestors mated with other early hominin groups, such as the Neanderthals and the Denisovans. But further research suggests they may have led a more promiscuous life than previously thought.

Inverse is counting down the 20 stories redefining 'human' from 2020. This is number 4. See the full list here.

In a study published in August, researchers analyzed human DNA using a brand-new method and, in doing so, they were able to unearth parts of the DNA that came from other species.

Using a method called the “ancestral recombination graph” algorithm, dubbed ARGweaver-D, the study team discovered that the Denisovans possessed a genome that contained one percent of DNA from an unknown distant relative.

The algorithm works by analyzing the genome to identify segments of DNA that may have come from different species, no matter the time and no matter the source. The team applied the algorithm to look at genomes from two Neanderthals, a Denisovan, and four modern humans. Using this specific approach, they were able to look further back in time than any other existing technology has been able to so far.

According to their findings, 3 percent of the Neanderthal genome can be traced back to ancient humans, and this interbreeding is estimated to have occurred between 200,000 and 300,000 years ago.

But the researchers found something even more fascinating. We know that the Denisovans, a group of extinct humans who lived in Asia, and Homo sapiens also intermingled. It turns out that, in doing so, they passed on some of the genes of this mysterious ancestor — what the researchers are calling a “super-archaic” population.

They found that 1 percent of the Denisovan genome came from this mysterious relative. It's estimated, in turn, some modern humans could hold about 15 percent of these "super-archaic" gene regions.

Who could this unknown ancestor be? One potential contender could be Homo erectus, an extinct human ancestor who lived in Africa about 1 million years ago. The problem is, we’ve never found any H. erectus DNA, so the most we can do is guess at the moment.

The findings only further complicate the evolutionary history of the modern human — it's possible there may have been ever more populations involved.

Inverse is counting down the 20 stories redefining 'human' from 2020. This is number 4. Read the original story here.

More like this
Science
6.21.2022 10:45 AM
Ancient stalagmites point to a massive drought that upturned 6th century Arabia
By Allison Parshall
Science
6.22.2022 8:26 PM
Yes, there are mites living on your face — and they can poop, a new study finds
By Allison Parshall
Science
14 hours ago
NASA launches CAPSTONE and more: Understand the world through 8 images
By Robin Bea
Related Tags
Share: