“The more creative minds, the better”

Are artists in space even worth it? 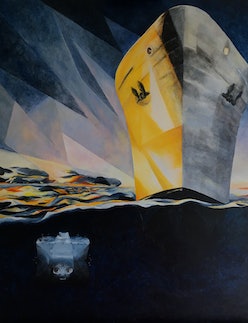 In the 1997 film Contact, Ellie Arroway (Jodie Foster) is overcome with emotion upon facing the wonders of the star system Vega. She tries to describe the sight — and fails.

24 years later, we have finally sent a poet into space. Sian Proctor was one of the four civilian crew members of SpaceX's Inspiration4 mission. Yes, she’s a geoscientist, entrepreneur, and perhaps even an astronaut, but Proctor is also an artist and wordsmith. In an interview with Space.com, she said she had packed watercolor paints and wanted to write poetry while sitting in the 360-degree glass cupula of the Dragon ship.

The Inspiration4 mission launched on September 16 and made a successful splashdown off the coast of Florida on September 18. In conversation with Today, crew member Chris Sembroski speaks about how the experience changed every member of the four-member crew — not just Sian.

“Each of us have been changed in a way that maybe we didn't expect," he says. "For me it was being able to see the Earth in a way that made me realize there is so much to see in person. I need to go and find those places and explore more.”

It may seem unusual in the context of costly space travel, but sending artists to the frontiers of human exploration is nothing new. The outer limits of the Earth’s oceans and landscapes inspired artists of the past, too. In fact, bringing an artist on an exploratory trip was even considered a necessity. The concept of an “expedition artist” took hold in the 1700s, whereby painters would join explorers on their journeys to document what they encountered, be it new landscapes, unknown peoples, or novel plants and animals.

In the age of HD photography and smartphones, expedition artists aren’t exactly necessary. Instead, the artists who create at the frontiers of scientific exploration offer a subjective perspective to something that is, by its very nature, empirical and data-driven. But with billionaires beginning to send artists into space to create work, is this a gift to the artistic community or just a vanity project? Are artists in space even worth it?

Jim Bell, a planetary scientist and professor of Earth and Space Exploration at Arizona State University, tells Inverse that although technology has made leaps and bounds, there are certain things only human minds are capable of imagining.

“There are all kinds of abstract visual art that compels us, excites us, motivates us, educates us,” he says. “That’s something technology can’t create.”

The Antarctic and the Red Planet

On Earth today, expedition artists play this role as scientists explore the most mysterious part of our blue planet — the deep ocean. British artist Alexandra Gould served as the expedition artist for the Five Deeps Expedition, a manned mission to the deepest point of each of the five oceans.

She tells Inverse the value of expedition artists is perhaps best viewed through the works of Frank Hurley, the official photographer for Ernest Shackleton’s Trans-Antarctic Expedition, which lasted from 1914 to 1917.

In 1914, Shackleton placed an ad in a London newspaper, reading:

Not exactly a winning sales pitch, but Hurley went anyway.

“He takes his kit and he is really adventurous,” Gould says. “I mean, he’s climbing up rigging, he's out in the darkness, they’re using magnesium flares. It’s phenomenal photography, but it’s because he was doing it. He’s the artist and the photographer. He created that human and the imperfect in his imagery.”

Today, the closest analog to this high-risk photography is perhaps the photos taken by Mars rovers and beamed back down to Earth. Bell works on certain Mars explorations and says while these high-tech tools may not be the perfect vehicles for art, occasionally there’s an opportunity for it.

For Gould, this urge is what makes an artist’s perspective in science so invaluable.

“You do have to have a human behind that,” she says. “The more creative minds, the better.”

“That's when you get mind-blowing photography and it changes public opinion, it changes people’s behaviors. And I think that’s really important moving forward.”

There’s a big difference between NASA missions and SpaceX’s commercial Inspiration4 launch. As more private companies are getting into space travel, this mission is a crucial step toward space tourism as an industry.

“I think what we’re seeing is the tip of the iceberg in terms of sort of regular person access to space,” says Bell.

This new form of travel poses a dilemma for deep ocean artist and explorer Alexandra Gould.

“I don’t think it's appropriate or ethical to be sending artists out into space,” she says. “I think space exploration, humans in space, is not viable. It's not good for the planet. It's too costly for the pollution.”

“I don’t really see it as exploration,” she adds. “What they’re doing now is space tourism. And I don’t see that an artist now needs to go replicate what someone else has so eloquently said before.”

There’s no way to know now whether space travel will one day be as mundane as a quick flight, but it’s certainly easy to dream big and forget the environmental cost of such travel. For now, access to space is limited to multi-billionaires and the people they deem worthy — which harkens back to yet another theme of art history.

From Medici to Musk

In the period known as the Renaissance, Leonardo Da Vinci, Caravaggio, Bellini, and others led the world through a heady era of creative innovation and artistic endeavor. But while they may have enjoyed contemporary fame, one of the best ways to survive as an artist during this time was to convince a patron to fund your work. Wealthy and powerful families like the Medicis, who ran Florence from 1434 to 1737, would hire artists to create great works of art — often focused on glorifying and documenting the family’s exploits.

For example, Rennaissance master Benozzo Gozzoli was commissioned by the Medici family to cover the walls of a chapel with frescoes. As he painted massive depictions of the procession of the Three Wise Men, he snuck the faces of Medici family members into the crowd.

How different are the multi-billionaires today launching themselves and others into space in this desire to be remembered in art?

Gould has firsthand experience with patrons. She was commissioned by explorer Victor Vescovo to create art alongside his Five Deeps expedition from December 2018 to August 2019. For her, this commission is different from what is happening right now in space.

“EYOS Expeditions, the organizers, wanted to bring in other voices and other disciplines because they find that the best way to get the best experience is to organize something with many voices, many disciplines,” she says.

Vescovo did commission art from Gould, but it was for his family and private enjoyment, not, as in Renaissance times, a way to glorify the subject in the public eye. Any art that’s created during or as a result of early space tourism expeditions like Inspiration4 is likely to be used as PR to gain media attention.

“These are the initial flights, the initial voyages, initial experiences, so they incite enormous amounts of media attention,” Bell says. “It’s an enormous opportunity for these kinds of patrons to bring attention to their businesses themselves.”

The future of art made in and for space is one of possibility across mediums. Bell speculates that zero gravity or other gravitational environments can add a whole new dimension for live performances, for example.

“I would love to be in the audience for the first play on the Moon,” he says. “It probably will be specially written for a low-gravity environment. So the actors can be running and jumping in ways that they couldn't on the Earth.” Considering the recent announcement by Russian space agency Roscosmos that a director and actress will create the first feature film made entirely in space, that may not be far off.

“This can’t possibly be just a PR exercise.”

Theater is not the only form that may be tweaked using gravity alone, he points out.

“I want to hear a music concert in zero-g,” Bell says. “Gravity has an effect on so many instruments, so it would sound so different. Of course, there wouldn’t be an orchestra pit. It would have to be more like an orchestra cloud.”

Gould put a different twist on her own predictions for art and space. Rather than make art in space, art may be brought back to Earth from space, either directly or indirectly in the form of ideas.

This is somewhat similar to Japanese billionaire Yusaku Maezawa’s dearMoon project, which seeks to launch artists into space to inspire them to create something new once they return to Earth. According to Gould, this can actually have ripple effects on the science sector as well.

“It’s about showing people why it’s valuable and maybe they can actually get a job in it as well,” she says. “It’s not always about getting money, sometimes it’s about getting new ideas and fresh blood into the industry.”

In her opinion, we may not be truly able to see today’s space exploration’s effect on the world of art for decades.