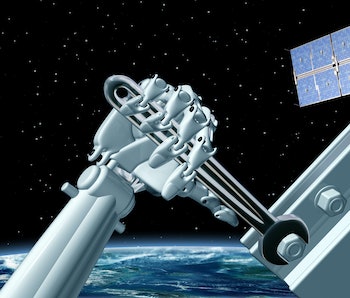 For more than 20 years, the Landsat 7 satellite circled Earth every 99 minutes or so, capturing images of almost all the planet’s surface every 16 days. One of many craft that observed the changing globe, it revealed melting glaciers in Greenland, the growth of shrimp farms in Mexico, and the extent of deforestation in Papua New Guinea. But after Landsat 7 ran short on fuel, its useful life effectively ended. In space, regular servicing has not been an option.

Now, though, NASA has a potential fix for such enfeebled satellites. In a few years, the agency plans to launch a robot into orbit and maneuver it to within grabbing distance of Landsat 7. The robot will use a mechanical arm to catch hold of it and refuel it, mid-air.

If successful, the mission would mark a milestone — the first time a satellite would be refueled in space. And this mission is just one of a number of planned public and private ventures intended to use robots to repair and improve the billions of dollars worth of satellites in orbit.

Eventually, efforts like these could lead to better and cheaper satellites that lower the cost of internet and cell phone networks, provide better weather forecasts, and give unprecedented views of planetary change and of the universe. They could even enable a new wave of in-orbit construction, with armies of robots building satellites, space stations, and even Mars-bound spaceships.

At the moment there are about 4,852 working satellites in orbit, playing crucial roles in communications, remote sensing, and other tasks. Almost all were launched with the knowledge that if anything broke there was no way of fixing it. Most satellites also need fuel to occasionally adjust their orbits. Once that’s gone they may become so much space junk, adding to the already substantial stream of debris encircling the globe.

“Imagine you’re going to go buy a car tomorrow,” says Brian Weeden, head of an industry group called the Consortium for Execution of Rendezvous and Servicing Operations (CONFERS). “And you have to keep in mind that you’re never going to be able to put more gas in it. You can never change the oil. You can never maintain or fix anything. And you have to use it for the next 10 years. Now, how expensive and how complicated do you think that car is going to be? That’s exactly what we have been doing with satellites.”

To keep satellites working as long as possible, engineers build redundant systems and pack in as much fuel as they can fit. All this over-engineering adds to the costs of building and launching the satellites — a modern communications satellite can cost about $500 million.

Almost all construction and repair that has happened in space so far has relied at least in part on astronauts, including fixes on the Hubble Space Telescope, and construction of the International Space Station. But sending humans into space is tremendously expensive, so the effort to develop robots to do the job has grown in recent years.

“What we would really like to do is have some way of having a robotic mechanic in space that can fix satellites when they break,” says Carl Glen Henshaw, head of the robotics and machine learning section at the US Naval Research Laboratory.

Robots to the rescue

In the last few decades, researchers have made progress toward that goal. In a 2007 NASA demonstration project, a pair of specially built craft docked in orbit and transferred fuel. More recently, in 2020, the aerospace company Northrop Grumman successfully launched two “mission extension vehicles,” equipped with their own engines and fuel, that attached themselves to two commercial satellites and boosted them into new orbits.

Two new missions expected to launch this decade will take service a step further. The demonstration projects will use semiautonomous robots equipped with mechanical arms to add fuel to orbiting satellites, and even to make simple repairs.

For his part, Henshaw is working on Robotic Servicing of Geosynchronous Satellites, a US Defense Advanced Research Projects Agency (DARPA)-funded mission. If it succeeds in a demonstration scheduled for 2024, it would mark the first time a robotic craft has managed to grab a satellite that was not specifically designed to dock with it. Henshaw and his colleagues recently explored some of the challenges faced in servicing satellites with space robots in the Annual Review of Control, Robotics, and Autonomous Systems.

There are a lot of such challenges. Because existing satellites were never intended to be serviced, they lack the markings, called fiducials, that would make it easier for a robot to visually orient itself with the moving satellite. There are no fixtures designed for the robot to hold on to. And the parts of a satellite that do stick out, like antennas and solar panels, tend to be too fragile to grab.

Another problem is the time lag between the robot and Earth. For a robot operating in geosynchronous orbit, about 35,000 kilometers up, distance and signal processing creates a communication delay of several seconds between the robot and its controllers on Earth. So the robot will need to handle the most crucial tasks on its own.

On the plus side, the work can build on existing robotic arms in space, including two currently in use on the International Space Station.

For a demonstration mission, Henshaw and his fellow engineers plan to choose one of the thousands of old, inactive satellites “parked” in out-of-the-way orbits. A robot would match orbits with the satellite, and maneuver to within about two meters, using cameras and a laser range finder. When it’s close enough, the robot would use one of its two arms to grab hold of an aluminum ring that previously anchored the satellite to the launch vehicle.

The other robotic arm would be able to poke and prod solar cells or antennas that have failed to unfurl correctly — a problem that happens every two or three years, Henshaw says. And it would be able to attach new instruments to the outside of satellites, such as more powerful transmitters, cameras, or antennas.

Plans call for a space robot called SPIDER (shown) to demonstrate the feasibility of in-orbit assembly. Its first task will be putting together a seven-piece, three-meter antenna from parts that it ferries from Earth.

Sometime after 2025, NASA plans to launch an even more ambitious robot. The On-orbit Servicing, Assembly, and Manufacturing 1 (OSAM-1) robot would first manage a complex refueling operation of an existing satellite. Then it would demonstrate that it can build completely new structures in space.

Landsat 7 will be first on OSAM-1’s to-do list. Launched in 1999 by the US Geological Survey into low-Earth orbit, about 700 kilometers high, the satellite’s work has been taken over by more advanced satellites. But it offers scientists an opportunity to test robotic refueling.

“Twenty-some years ago, technicians fueled up the satellite in preparation for launching it, and they never thought that anybody would ever touch that interface again,” says Brent Robertson, NASA’s OSAM-1 Project Manager.

OSAM-1 will use its robotic arm to cut through a layer of insulation, snip two wires and unscrew a bolt before hooking up a hose and pumping in 115 kilograms of hydrazine fuel, says Robertson. (See video here.)

Although repair and servicing of existing satellites is the most immediate goal, in-orbit assembly and manufacturing are potentially more important in the long run.

OSAM-1, for instance, has an additional mission that will carry a separate robot called the Space Infrastructure Dexterous Robot (SPIDER), designed to demonstrate that it can assemble things in space. SPIDER’s first task will be to put together a seven-piece, three-meter antenna that is carried up into orbit.

Using a process similar to 3D printing, OSAM-1 will also aim to show that it can build structural components from scratch, creating strong yet lightweight composite beams out of spools of carbon fiber and other textiles. Beams like these could be connected to form structural components of a satellite or other orbiting structures.

If the missions now in planning succeed, robotics could open a new era of space construction that is unaffordable today — fuel depots, space mining operations, roomier space stations for space tourism, and even Mars-bound spaceships constructed in orbit.

“We want to demonstrate that we can build these things. No one’s done this before,” Robertson says. “If you have the capability to assemble things in space, you can bring your own material, or have material sent to you. And you can build much bigger things.”

More like this
Science
5.9.2022 1:00 PM
These mass-murdering black holes can binge thousands of stars at a time
By Matt Williams and Universe Today
Science
5.14.2022 10:00 AM
This viscous liquid metal could lead to a revolutionary robotics breakthrough
By Kurt Kleiner and Knowable Magazine
Science
5.14.2022 6:00 PM
Lunar law: Canada can now prosecute crimes committed on the Moon
By Matt Williams and Universe Today
Related Tags
Share: