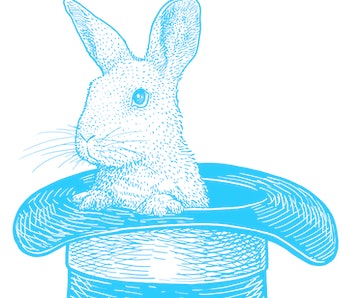 For Elias Garcia-Pelegrin, learning magic began as a way to make some extra money as an undergraduate student. These days, the University of Cambridge researcher performs for an unlikely audience — one that presumably doesn't pay well.

To better understand perception and cognition, Garcia-Pelegrin performs magic tricks for animals. In a new report, he and colleagues make a case for a twist on magic that's both scientifically useful and seemingly a really good time.

By coincidence, Garcia-Pelegrin wasn't the only person in his lab with a background in magic — his supervisor has performed in magic shows for around a decade. The colleagues began to discuss the role of magic in human cognition studies, and how the same principles can be applied to animals.

Those ideas are outlined in a paper published Thursday in the journal Science. The authors argue for using a "magical framework" in animal experiments to better understand cognition and perception.

Magic tricks work on humans thanks to a delicate balance of expectations and misdirection. The deception is made possible by our understanding of object permanence, and our attention blind spots — we're swayed to respond to magic by human body language. Experiments with a "magical framework" could reveal whether the same is true in animals, they argue.

"We know that humans get fooled by magic effects — otherwise magicians wouldn't have jobs," Garcia-Pelegrin tells Inverse. "The question is, will they work in animals? And if they do, what does that mean about their attention processes and perceptive processes?"

On YouTube, there's no shortage of videos of animals at least appearing to be floored by street magic.

The fact that there are so many of these videos suggests that it's possible to engage non-humans in the wonders of magic. But is what the animals are expressing genuine surprise?

When humans sit at a magic show, their experience is set up by a number of understood factors: For instance, that the magician is there as entertainment, not a threat. Humans understand that an object disappearing before their eyes is part of the fun because to an extent, the audience is in on it.

A trick may be astounding to a human, "but it's only great because you understand that I mean you no harm," Garcia-Pelegrin says.

The trickery of a magician, then, could yield very different reactions in animals. By default, using food for tricks with animals makes sense, as a means of capturing attention.

"However if you make food disappear in front of them, they might get more annoyed than surprised," Garcia-Pelegrin says.

That doesn't mean the magic didn't work — it's just a different outcome. And it suggests that without an experiment designed with a control, we can't say exactly what reaction we're viewing on YouTube. That's precisely why Garcia-Pelegrin and colleagues want to bring more animal magic into the lab.

Magic in the lab — Gauging how animals respond to misdirection, illusion, and sleight of hand could draw out specific traits in animal cognition.

"Magic is a violation of expectation in its purest form," Garcia-Pelegrin says. "If you were used to objects flying or objects vanishing in mid-air, then magic wouldn't surprise you at all."

Animal research subjects need to understand certain concepts — elements like gravity and a general intuition about the way the world worlds — to perceive magic tricks as humans do.

In humans, previous research shows that tricking a human with a vanishing ball depends on both the spectator having expectations about what will happen and the magician delivering social cues. In animals, Garcia-Pelegrin argues for using the same trick to study their perception of the ball's disappearance and determining whether past experiences or current expectations change that perception.

He and other scientists are already doing this work at Cambridge's Comparative Cognition Lab. Researchers in the lab study how animals' cognitive abilities vary across species, including members of the crow family and cephalopods.

Testing how animals react to a vanishing object can bring forth new ideas about animals' expectations and whether human body language influences an animal audience, Garcia-Pelegrin explains. You can see an example of this type of trick — with a peanut standing in for a vanishing ball — below.

Animals also need to be capable of object permanence, something humans learn as babies, in order to understand when an object disappears. Establishing object permanence paradigms would be a good starting point, the authors suggest, for investigating parallel mechanisms in human and animal how'd-he-do-thats.

Magic in nature — Performing magic for an audience of animals can tell us something new about perception. But even in the wild, some animals already perform illusions of their own. Magicians will use misdirection as a tool to control the audience's attention, pulling it away from learning the mechanics behind an illusion.

Chimpanzees and birds do the same.

Chimps use a move that researchers call "tactical deception," which involves moving their gaze away from a desired objected to mislead a competitor. Jays protect food by pretending to hide it in one location, sticking a beak in the ground as a bluff, but actually stashing it in another.

The idea that these tactics work in nature suggests animals may have adapted to exploit blind spots in attention similar to the ones humans have — which allow us to be awed by magic.

In the future, Garcia-Pelegrin hopes that research can answer three main questions about animal perception of magic:

Garcia-Pelegrin and colleagues note that in order to misdirect an animal's attention, you need to have it in the first place. Certain species may not pay enough mind to humans to be good study subjects — or they're so social, like penguins, that experiments may be thrown off.

Whatever the outcome of future experiments, the empirical evidence that animals might be into magic is there already, Garcia-Pelegrin says: "If animals were't perceptive to it, we wouldn't have 10,000 videos on YouTube."

More like this
Science
Jan. 21, 2023
Plague study complicates a commonly held belief about the Black Death
By Samuel Cohn, Philip Slavin and The Conversation
Science
5 hours ago
The Plague Is Still Here — And It Could Infect Your Cat
By Tara Yarlagadda
Science
Jan. 29, 2023
Are coyotes dangerous to dogs and cats? Here’s how to keep your pets safe
By Tara Yarlagadda
LEARN SOMETHING NEW EVERY DAY.
Related Tags
Share: