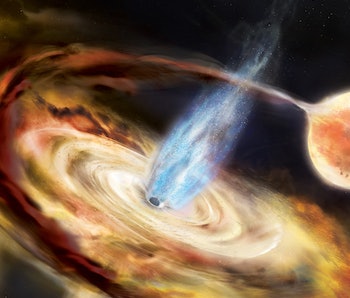 Throughout 2018 and 2019, a group of astronomers stared at a black hole some 10,000 light years away from Earth. This black hole, part of a binary system dubbed MAXI J1820+070 and situated within the Milky Way, is about 8 times the mass of the Sun. It's companion star, meanwhile, measures about half the mass of the Sun.

The reason for their interest was what alerted them to the binary system's existence in the first place: A sudden blast of light in July of 2018 which caught the astronomers by surprise. They caught a startling glimpse of two hot, gas jets, bursting forth from the black hole at 80 percent the speed of light. The jets' sheer energy created a hypnotic cosmic flare, and further fueled our fascination with these strange cosmic bodies.

The bursts are apparent in a series of four observations by NASA's Chandra X-ray Observatory. From these data, the astronomers were able to detect the jets as they burst from the black hole, shooting away from its center, and slamming straight into surrounding matter.

INVERSE IS COUNTING DOWN THE 20 MOST UNIVERSE-ALTERING MOMENTS OF 2020. THIS IS NUMBER 4. SEE THE FULL LIST HERE.

The full description of the jets appeared in Astrophysical Journal Letters earlier this year.

The jets are pointed in opposite directions, moving away from the black hole toward the north and the south.

Due to their positioning, the jet outburst created a speedy optical illusion.

From our perspective on Earth, it appears as though the northern jet is moving at 60 percent the speed of light, while the southern one is traveling at 160 percent of light speed.

“Just how fast are the jets of material moving away from the black hole? From Earth’s perspective, it looks as if the northern jet is moving at 60 percent the speed of light, while the southern one is traveling at an impossible-sounding 160 percent of light speed,” study co-author Mathilde Espinasse and her colleagues said in a statement.

Rather, the southern jet is pointed in our direction, and if something travels towards us close enough to the speed of light along a trajectory following our line of sight, then it gives the illusion that it is traveling faster than the speed of light.

“This is an example of superluminal motion, a phenomenon that occurs when something travels towards us near the speed of light, along a direction close to our line of sight," the researchers said.

But in reality, the velocity of both jets is actually around 80 percent of the speed of light, the researchers found.

So while it may not have broken the very foundation of physics, the black hole outburst still made for a cool visualization of matter traveling at a high speed.

INVERSE IS COUNTING DOWN THE 20 MOST UNIVERSE-ALTERING MOMENTS OF 2020. THIS IS NUMBER 4. READ THE ORIGINAL STORY HERE.