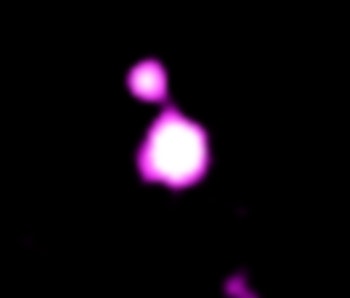 At the center of galaxies, massive black holes lurk in the shadows and, usually, they swallow up material that dares to come near. However that's not always the case, new images captured by astronomers show what happens when a black hole acts as a gas fountain.

Astronomers have recently caught a startling glimpse at two hot gas jets bursting from a stellar-mass black hole at 80 percent the speed of light, creating a hypnotic cosmic flare that further fuels our fascination by these massive beings.

A team of astronomers recorded four observations by NASA's Chandra X-ray Observatory taken in the years 2018 and 2019, allowing them to detect the jets as they burst from the black hole, shooting away from its center and slamming straight into surrounding matter.

The observations are detailed in a study published recently in The Astrophysical Journal Letters.

The black hole in question is located about 10,000 light years away in the Milky Way and has a lone companion star that measures about half the mass of the Sun. It is a stellar-mass black hole, meaning that it formed in the aftermath of the gravitational collapse of a star. Therefore, this black hole is tiny compared to others, measuring at about eight times the mass of the Sun.

That may seem big, but considering that the supermassive black hole at the center of the Milky Way, Sagittarius A*, is 4 million times the mass of the Sun, it's relatively quite small.

But this small black hole still put on quite a show.

The event horizon marks the boundary around a black hole from which nothing, not even light, can escape. However, while hot gas from the surrounding star falls into the black hole, some of the hot gas shoots out in the form of jets, or short beams of material, from outside the event horizon.

The jets are pointed in opposite directions, moving away from the black hole toward the north and the south.

But in reality, the velocity of the particles in both jets is greater than 80 percent of the speed of light. So it is not quite breaking the rules of physics, but still very close.

Abstract: The black hole MAXI J1820+070 was discovered during its 2018 outburst and was extensively monitored across the electromagnetic spectrum. Following the detection of relativistic radio jets, we obtained four Chandra X-ray observations taken between 2018 November and 2019 May, along with radio observations conducted with the VLA and MeerKAT arrays. We report the discovery of X-ray sources associated with the radio jets moving at relativistic velocities with a possible deceleration at late times. The broadband spectra of the jets are consistent with synchrotron radiation from particles accelerated up to very high energies (>10 TeV) by shocks produced by the jets interacting with the interstellar medium. The minimal internal energy estimated from the X-ray observations for the jets is ∼1041 erg, significantly larger than the energy calculated from the radio flare alone, suggesting most of the energy is possibly not radiated at small scales but released through late-time interactions.