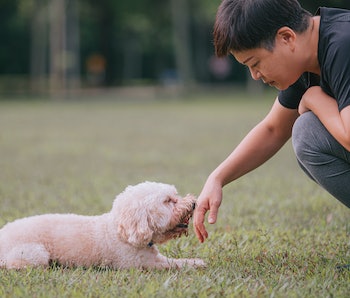 Puppies may be cute, but they are a handful to train — or at least, that’s what conventional wisdom dictates.

But new research suggests that there’s one area where you might not need to train your pup as much as you thought: social communication skills. As it turns out, your pup is a natural when it comes to picking up on unspoken social cues.

“From a young age, dogs display human-like social skills,” Emily Bray, lead author of the new research and a canine researcher at the University of Arizona, said in a press statement.

The study was published Thursday in the journal Current Biology

“For example, even before puppies have left their littermates to live one-on-one with their volunteer raisers, most of them are able to find hidden food by following a human point to the indicated location," said Bray

Ultimately, the study found that dogs naturally communicate much like small children, able to understand and respond to certain social cues at birth while developing more substantive communication later on in their development. Like children, dogs also vary in their social skills — some are better at interpreting unspoken signals than others.

How they did it — The researchers developed a three-pronged experiment to test how well dogs understand human cues in three different social contexts. These cues were:

All 375 dogs were pedigree dogs — or dogs born from parents of the same breed — and all were approximately 8 weeks old.

The puppies had also, to that point, not been socialized regularly with humans, allowing the researchers to study the puppies’ innate communication skills.

In the first social setting, the researchers held the dog while making gestures — pointing a finger at a cup — to indicate the hidden location of food. The researchers also showed the puppy a small yellow block before marking the cup containing food with that same block.

In the second social experiment, the researcher communicated with the puppy through “baby talk,” echoing how humans often speak to their dogs using high-pitched tones and exaggerated speech. The researcher measured how long the puppy gazed at the human’s face.

The researcher then approached the puppy and measured how long the dog spent in close proximity to the human. The puppies held their gaze for six seconds on average and maintained contact with the human for an impressive 18 seconds.

In the final experiment, researchers presented the puppy with an “unsolvable” task and timed how long the puppy maintained eye contact with the researcher during this task:

[In] the unsolvable task, puppies initially learned to displace the lid from a container to obtain a food reward within; then, on test trials, the lid to the container was fixed in place, rendering the problem unsolvable, and the experimenter timed the duration of the puppy’s gaze to their face.

In all but the final experiment, the researchers found that puppies were able to follow their cues exceptionally well, indicating that these communication skills were, to some degree, genetic and not necessarily acquired through human socialization.

Finally, the researchers used statistical models to calculate the genetic variation in these traits among individual dogs.

Why it matters — The research provides what the authors call the “first direct evidence” that many canine social skills are genetically inherited.

The findings could be a watershed moment in our understanding of dog domestication, helping us understand how dogs — unlike their wild wolf ancestors — specifically evolved to communicate with humans.

"These are quite high numbers, much the same as estimates of the heritability of intelligence in our own species," Bray said. "All these findings suggest that dogs are biologically prepared for communication with humans."

The study builds upon previous research about social cognition in dogs, which found that weeks-old domesticated puppies — unlike wolves — could interpret human signals, even if they had little prior contact with humans.

In fact, the way dogs evolved to communicate with humans could even explain why we find them so darn cute and want to be their friend. In 2018, an Arizona State University professor found that humans find puppies to be the cutest right after they are weaned from their mother’s milk — when dogs are most vulnerable and need human protection.

What’s next — There is one important limitation to this exciting puppy research. Pet scientists have confirmed the links between puppies’ social cognition and their genetics, but we don’t fully know the mechanisms in the brain that govern these social skills.

However, scientists are excited by the prospect of using their study to better understand the evolution of social cognition in dogs and humans. The pups’ cooperative social skills constitute some of the foundational elements of communication in the animal kingdom, according to the study.

The researchers conclude: “Our findings also set the stage for future research on the genetic architecture of these traits [...] in dogs and humans.”

Abstract: Human cognition is believed to be unique in part because of early-emerging social skills for cooperative communication. Comparative studies show that at 2.5 years old, children reason about the physical world similarly to other great apes, yet already possess cognitive skills for cooperative communication far exceeding those in our closest primate relatives. A growing body of research indicates that domestic dogs exhibit functional similarities to human children in their sensitivity to cooperative-communicative acts. From early in development, dogs flexibly respond to diverse forms of cooperative gestures. Like human children, dogs are sensitive to ostensive signals marking gestures as communicative, as well as contextual, factors needed for inferences about these communicative acts. However, key questions about potential biological bases for these abilities remain untested. To investigate their developmental and genetic origins, we tested 375 8-week-old dog puppies on a battery of social-cognitive measures. We hypothesized that if dogs’ skills for cooperating with humans are biologically prepared, then they should emerge robustly in early development, not require extensive socialization or learning, and exhibit heritable variation. Puppies were highly skillful at using diverse human gestures, and we found no evidence that their performance required learning. Critically, over 40% of the variation in dogs’ point-following abilities and attention to human faces was attributable to genetic factors. Our results suggest that these social skills in dogs emerge early in development and are under strong genetic control.