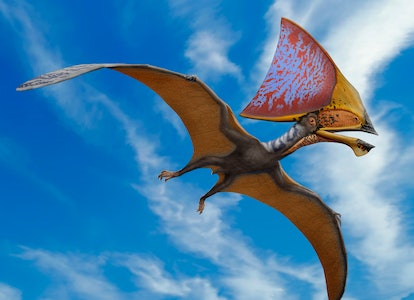 But in 2013, the Federal Police had a more unusual target in mind: ancient fossils dating back to when dinosaurs roamed the Earth.

One of the specimens was a tapejarid fossil neatly preserved in limestone rock. The fossil belongs to the species Tupandactylus navigans.

The Tapejaridae clade were unusual, toothless, Cretaceous-era pterosaurs. They’re known for their large crested heads, which scientists theorize may have been used as a “sail.”

Through a strange chain of events, the remarkably well-preserved fossil eventually made its way from the police to the hands of paleontologist Victor Beccari.

This process, and the fossil itself, are described in a study published Wednesday in the journal PLOS One. Before now, the Tupandactylus genus was only known from isolated skulls.

The finding allowed Beccari’s research team to conduct a groundbreaking analysis of the ancient beast, revealing insight into how it might have lived hundreds of millions of years ago.

“We were in awe when we first saw the specimen,” Beccari, a researcher at the University of São Paulo’s Institute of Biosciences, tells Inverse.

What you need to know first — Fossils might seem like a strange thing for the police to find, but in recent decades, police raids have uncovered everything from dinosaur eggs in Spain and Australia to ancient fish fossils in the United States.

The underground world of fossil trade is a big-budget game, and, in turn, Brazil has prioritized the protection of these sought-after ancient finds.

“Fossils in Brazil are protected by law, as they are part of the geological heritage of the country,” Beccari says. “Collecting fossils requires permission, and the trade and private collections of fossils are illegal in Brazil.”

Collectors that illegally export specimens can face up to 20 years in jail. The government has also worked with other countries to secure the safe return of illegally traded fossils.

“Many fossils are lost due to illegal trading every year.”

For example, a 2020 study announcing the discovery of a feathered dinosaur came under fire when Brazilian scientists questioned whether the 1995 export of the fossil to Germany violated the country’s laws against the trade of fossils.

“Many fossils are lost due to illegal trading every year, as fossils in private collections cannot be described scientifically, and even fossils that are now in museums abroad are hard to access for Brazilian paleontologists,” Beccari says.

How they did it — After the 2013 police raid, the Geosciences Institute of the University of São Paulo, Brazil acquired the fossils recovered during the police raid.

In 2016, Beccari first got a close-up look at the tapejarid fossil — known as “GP/2E 9266” — when he was an undergraduate student studying biological sciences at the University of São Paulo. This study is the first time these remains are officially described in a scientific paper.

“It was already prepared before the police confiscated the specimen, so we could tell right away it was an exceptional fossil,” Beccari says. He doesn’t know exactly how the fossil was collected before police discovered it during the investigation.

The study team conducted a CT scan of the fossil, allowing them to generate a 3D model and better analyze its unique figures. The fossil is the most complete tapejarid known to date.

What’s new — Their analysis revealed GP/2E 9266 as a specimen representing the Tupandactylus navigans species. The species was identified via its distinctive characteristics, such as its impressive head crest.

Before the police raid turned up this complete fossil skeleton, researchers had only skull specimens to analyze Tupandactylus navigans. A more complete skeleton enables the researchers to better study this little-understood Cretaceous-era creature.

He states that the fossil originated in the fossil-rich Crato Formation in northeastern Brazil, where many thieves have looted fossils over the years. Tapjerids were the most abundant type of pterosaur in Brazil.

Why it matters — The fossil’s exceptional preservation suggests how the Tupandactylus navigans may have lived an estimated 115 million years ago.

“This fossil is special because it is the most complete pterosaur from Brazil and it brings new information about the anatomy and ecology of this animal,” Beccari says.

The study team was especially interested in unpacking the animal's capacity for flight. Based on the fossil, researchers concluded the Tupandactylus navigans stood at only one meter (3.28 feet) tall, though the head crest alone took up 40 percent of its height.

“The skeleton shows all the adaptations for a powered flight, which the animal may have used to quickly flee predators,” Beccari says, adding that the creature’s large head crest may have restricted the animal to short-distance flights.

Other features, such as the animal’s keratin beak — a structure similar to one in birds — suggest the animal ate hard plants, such as seeds or nuts.

“The limb proportions — wings and legs — also argue for a terrestrial lifestyle, meaning that this animal could spend most of its time on the ground, and forage for food,” Beccari says.

What’s next — This fossil’s discovery may have come about through remarkable circumstances, but the story is far from over. Scientists have big plans for what comes next for GP/2E 9266.

“The completeness of this fossil will allow us to further study in-depth many of the ecological and aerodynamic features of this animal,” Beccari says.

Specifically, Beccari plans to use the 3D analysis of the tapejarid’s skull to “to understand what kind of food source Tupandactylus was using” based on the beast’s bite.

He further hopes this will result in an “aerodynamic study” that will test and confirm the hypothesis about the animal’s capacity for flight. The research team also plans to cast UV light on the fossils, in an effort to determine the color of the animal’s prominent crest — bringing us one step closer to depicting this flying, foraging pterosaur in its full glory.

Abstract: A remarkably well-preserved, almost complete and articulated new specimen (GP/2E 9266)of Tupandactylus navigans is here described for the Early Cretaceous Crato Formation of Brazil. The new specimen comprises an almost complete skeleton, preserving both the skull and post-cranium, associated with remarkable preservation of soft tissues, which makes it the most complete tapejarid known thus far. CT-Scanning was performed to allow the assessment of bones still covered by sediment. The specimen can be assigned to Tupa.navigans due to its vertical supra-premaxillary bony process and short and rounded parietalcrest. It also bears the largest dentary crest among tapejarine pterosaurs and a notarium, which is absent in other representatives of the clade. The new specimen is here regarded as an adult individual. This is the first time that postcranial remains ofTupa.navigans are described, being also an unprecedented record of an articulated tapejarid skeleton from theAraripe Basin.