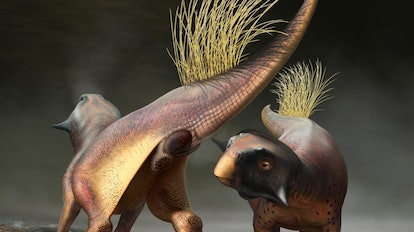 Not exactly a butthole.

We have many advantages dinosaurs didn’t, from our big brains to our adaptable bodies. But when it comes to sex, defecation, urination, and social signaling – dinosaurs managed to achieve a level of efficiency we can only dream of.

Psittacosaurus was a Labrador-sized, beaked, plant-eating dinosaur that lived between 126 and 101 million years ago. Most of this dinosaur's body has been lost to time, but some unique, well- preserved parts are on display at the Senckenberg Natural History Museum in Frankfurt, Germany. Those parts include an orifice – in essence, the dinosaur’s butthole – which was flattened into a fossil.

Now scientists have discovered just how useful that orifice actually was. A 3D reconstruction of it published Tuesday in Current Biology suggests it was used for defecating, urinating, copulating, egg-laying, and, perhaps, two forms of social signaling.

Technically, this opening is far more than just a butthole. It was a multi-purpose cloacal opening (cloaca is Latin for sewer). Cloacal openings, or single multi-purpose holes, are found in animals like amphibians, reptiles, and birds, but aren’t as common in mammals. Now, scientists have a view of what dinosaur cloacal openings may have looked like in life.

Dinosaur orifices have proved to be a fascination for scientists, says Jakob Vinther, the study’s lead author and a senior lecturer at the University of Bristol. He realized its unique hold on the psyche when he began to describe the unique features of this specific fossil.

A rare discovery — Ultimately, the project yielded more insight than the study team initially dreamed of. The structure of the cloacal opening, the study claims, may hold additional clues as to how dinosaurs communicated with one another.

Most dinosaur remains have always been hard, like bones. It’s not very often we get a preserved soft part, like the flattened orifice of Psittacosaurus, says co-author Diane Kelly, a senior research fellow at UMass Amherst.

“Fossils that preserve soft tissue are incredibly rare —and since the cloaca is made entirely of soft tissues like muscle and collagen, it’s quite unusual that it was preserved in this fossil,” Kelly tells Inverse.

Digging into the details — With this unique specimen in hand, the team got to work. They photographed the opening using a high-end Nikon D800 camera, stitched the photos together in photoshop, and hired an illustrator to create an accurate picture of what the opening may have looked like in life.

The opening, called the vent, actually consists of three parts. There’s the actual opening itself, flanked on each side by two ventral lips. Slightly below is a dorsal lobe that completes the trio.

This opening bears similarities to those seen in crocodiles, the study authors note. The crocodile also has a set of lips around the cloacal opening. However, the lips on this dinosaur come together to form an upside down V shape, with the bottom flaring outwards. In crocodiles, the lips close at both ends.

The interior chamber behind the opening may have once housed the dinosaur’s penis or clitoris, but it’s not possible to be sure — genitalia doesn't tend to survive the fossilization process.

“We can’t really reconstruct how they might have copulated,” Kelly says. “But the shape and color of the tissue that’s preserved suggest that these animals might have used both odor and visual signals to interact with other members of their species.

Why dinosaur butts matter – Although the cloacal opening may be unique, two other features were especially interesting to the scientists.

"We can’t really reconstruct how they might have copulated."

They noticed two “lateral swellings” that are the same place we might find musk-producing glands in alligators. In alligators, those glands release fatty secretions during social interactions – like a head-slapping display.

The team also realized the lips of the cloacal opening were likely a very different color than the rest of the area around it – perhaps due to melanin, a natural pigment found in human skin tones. That different color may have been used to send visual signals. (Male birds, like the Great Bustard, will sometimes flash their shiny white tail feathers as a conclusion to a mating ritual.)

Whether through smells or through or visual signaling, it’s possible that the cloacal opening was one way that dinosaurs got to know each other — perhaps Biblically.

“Perhaps this is a rare glimpse into a past in which cloacal signaling was much more common and dinosaurs were strutting around with the colorful cloacas in their pursuit of a future mate,” Vinther says.

It will take more research to understand whether dinosaurs used features of the cloacal opening to communicate, but it does suggest that the next time we walk through a museum you might see some far different pictures of dinosaurs interacting with one another. We may start seeing far more rear-to-face interactions than face-to-face ones.

Summary: The Frankfurt specimen of Psittacosaurus sp. (SMF R 4970) from the Early Cretaceous Jehol deposits of Liaoning (Figure S1) exhibits the best preservation of scale-clad integument in any non-avian dinosaur yet described1. Preservation of colour patterns and countershading allowed a detailed reconstruction of this individual’s physical appearance suggesting it was camouflaged for life in a shaded lighting environment2. It was previously noted that the cloacal region was preserved2, but its detailed anatomy was incorrectly reconstructed. We show here that the fine anatomy of the vent is remarkably well preserved and can be retrodeformed to illustrate its three-dimensional nature. The vent’s scale anatomy and pigmentation are distinct from adjacent body regions, and although its anatomy does not reveal much information about the ecology, or sex, of this dinosaur, it suggests possible roles for visual and olfactory signaling.

More like this
Science
8.4.2022 6:15 PM
3D analysis reveals a key similarity between dinosaur and bird embryos
By Charles Q. Choi
Science
21 hours ago
'Gifted' dogs may share this one personality trait. Does your dog have it?
By Tara Yarlagadda
Science
8.11.2022 5:00 PM
Look: A deep-sea expedition just captured these incredible views of life underwater
By Jennifer Walter
Related Tags
Share: