50 years ago, NASA sent a message to aliens — and sparked a Solar System mystery 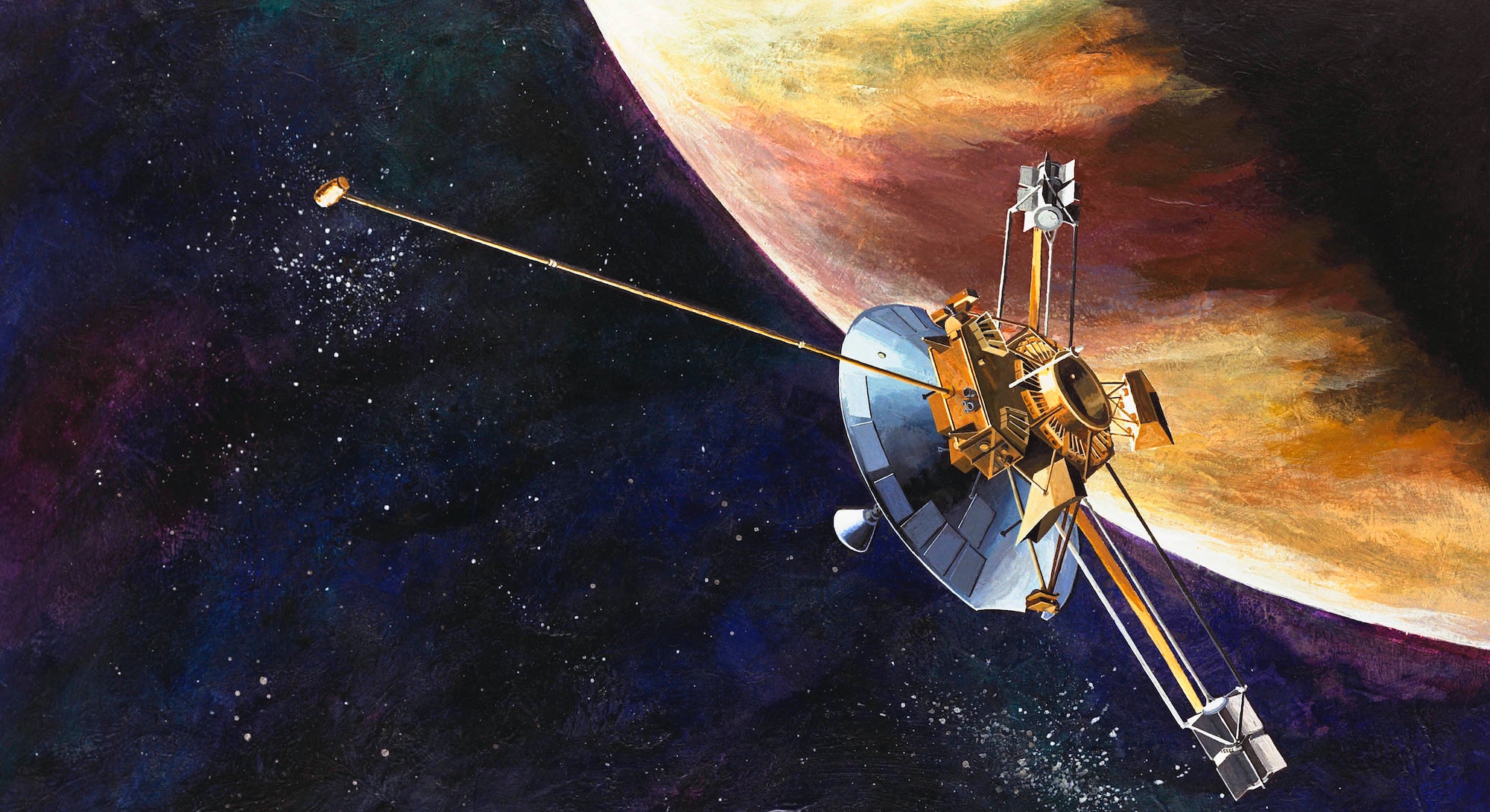 How to sum up the last fifty years of human space exploration? The International Space Station is an orbital beacon of collaborative research. The Hubble Telescope has transformed how we imagine the cosmos, and the James Webb Space Telescope will take our view to the next level.

It is easy to forget that a mere fifty years ago, a space probe launched and became the first unmanned mission to Jupiter — Pioneer 10. The probe not only provided a first close glimpse at the giant gas planet, but it also paved the way for two crafts that have altered our understanding of the Solar System, the Voyager missions.

The first of its kind, Pioneer 10 shows that, unlike landlines, the space-exploration technology of this bygone era can still go toe-to-toe with state-of-the-art inventions today. Pioneer 10 remains the spacecraft with the cleanest navigation ever used for exploring the outer Solar System, Slava Turyshev tells me. Turyshev is a research scientist at NASA’s Jet Propulsion Laboratory. From its initial build to the last signals it beamed back to Earth, Pioneer 10 is a lesson in how great a trail one craft can blaze through the cosmos.

NASA’s Pioneer 10 was initially conceived after then NASA engineer Gary Flandro spotted a rare alignment of the outer planets that — if a spacecraft was sent out from Earth — would allow the craft to explore them all in a single mission. Flandro’s theory was the basis of the Voyager I and Voyager II missions — which today still travel on through the cosmos beyond the Solar System. But before there were the Voyager crafts, there were Pioneers.

To prepare for Voyager, NASA launched two advance probes to scout the way: Pioneer 10 and Pioneer 11. Pioneer 10’s sole purpose was to image and study Jupiter. It launched on March 2, 1972, from Cape Canaveral, Florida. At a mere 569 pounds, about one-eighth of the weight of a small African elephant, the Pioneer 10 arrived in interplanetary space in 90 minutes and passed the Moon in a mere 11 hours, making it the fastest manmade object at the time.

Pioneer’s raison d’etre was to make it to Jupiter, take some images of the planet, and collect some data. That’s it. But the mission evolved, and the space probe wore a number of different hats until its last signal was received on January 23, 2003. At that point, it was zipping its way out of the Solar System at a distance of 7.3 billion miles from Earth.

Originally intended to last a 21-month mission, Pioneer 10 was in use for over 30 years.

It was, Turyshev says, “ahead of its time.”

The spacecraft became the first to pass Mars, and on July 15, 1972, just about four months after its launch, it became the first spacecraft to enter into the asteroid belt. A trailblazer, it remained the farthest manmade object from Earth in space until February 17, 1998, when it was surpassed by Voyager I.

On December 4, 1973, Pioneer 10 came the closest it ever did to Jupiter, completing its original mission. After that, it started to wend its way out of the Solar System at escape velocity. In November of 2017, the Pioneer 10 was about 11 billion miles from Earth, headed quietly for interstellar space. In about two million years, Pioneer 10, or what is left of it, will reach the red eye of the constellation Taurus.

The first of Pioneer 10’s “firsts” lies in its engineering; Pioneer 10 was the first spacecraft to run entirely on all-nuclear electrical power.

Pioneer 10 was equipped with 11 scientific instruments to study Jupiter and its moons. Beyond imaging the planet, the mission was intended to make infrared and ultraviolet observations, measure polarity and magnetic fields, study the composition of charged particles, detect plasma, cosmic rays, and zodiacal light. In doing so, it would permit scientists here on Earth to determine the composition of a planet’s atmosphere and its mass. Today, that legacy lives on in the Webb Telescope, which will peer into exoplanets’ atmospheres for traces of biological signatures.

But there are two other, more mysterious, and perhaps more profound ways Pioneer 10 continues to influence space science today: One is to do with astrobiology and the other to do with theoretical physics.

An instruction manual for Earth —  In the event Pioneer 10 is found by an advanced intelligent life form in the universe, then they will know precisely where it came from.

Immediately before the construction of the Pioneer 10, a journalist interested in extraterrestrial communication, Eric Burgess, visited NASA’s JPL. He and Carl Sagan, a science communication pioneer himself, wanted to convince NASA that Pioneer 10 might be a means to communicate with extraterrestrials. Sagan and Frank Drake, the founder of the Search for Extraterrestrial Intelligence (SETI) Institute were given three weeks to design a relic for Pioneer 10 to carry into space.

The final product was a gold-covered, aluminum plaque. It features several elements, each intended to aid extraterrestrials to trace the Pioneer 10 back to its origin in the space-time continuum by using the location of pulsars with respect to Earth at the time of the space probe’s conception. It also features a sketch of the humans who built Pioneer 10, and an open palm to indicate peaceful intention.

Because humans lack any common tongue with extraterrestrials (we think), then the working theory behind the plaque was that a physics-based understanding of the universe — a universal language, if you will — would be so fundamental that it would allow any other intelligent life to travel through space to find Earth. After all, this civilization would need to be advanced enough to find Pioneer 10 in space in the first place.

The Pioneer Anomaly — Pioneer 10 had a cutting-edge navigation system, meaning that its location at any given time should be entirely predictable by known physical laws. Any anomaly in its location according to those laws would, in turn, indicate a new phenomenon in the universe to science. Turyshev recalls how they wanted to use this wayfinding ability to try and explain a perennial mystery in Solar System science: Planet X.

Planet X is the term for a gravitational anomaly — ostensibly a planetary body — that would account for any orbital motion otherwise not explainable by known gravitational laws and known Solar System masses.

“We were looking for Planet X when a term could be used to be appointed back then,” Turyshev says.

But then something even weirder than Turkyshev had expected happened: Turyshev and a NASA team noted that Pioneer was leaving the Solar System more slowly than predicted. Turyshev and his research group published a paper in 1998 on these observations — something that would become known as the Pioneer Anomaly.

Turyshev’s observations were made around the same time that physicists realized the universe was expanding as a result of dark energy. In turn, dark energy became a top suspect for causing the Pioneer Anomaly.

Turyshev explains that if you multiply the speed of light by the rate of universal expansion — the Hubble Constant— you get exactly the value that explains Pioneer’s slowing. Since then, the Pioneer Anomaly has inspired more than 1500 peer-reviewed studies in the field of theoretical physics.

Ultimately, the relationship to dark energy turned out to be a coincidence. In 2012, Turyshev and his team solved the Anomaly, determining that it was actually due to a thermal recoil force caused by the asymmetric emission of heat generated by the nuclear reactor in the spacecraft.

This effect is now taken into account in the engineering of all NASA spacecraft. Nonetheless, no deep-space probes since Pioneer 10 (and 11) have been capable of such precise navigation, according to Turyshev.

Pioneer’s legacy continues today: Turyshev says that some of the lines of investigation opened as a result of the Pioneer Anomaly are still active fields of research. At the same time, there is mounting evidence that features of dark energy and dark matter undermine supposed physical truths. And we can begin to explore these in and around our own Solar System, he says — in fact, we might be enveloped by the stuff.

“No spacecraft was designed better than Pioneer, but it was ahead of its time. We desperately need now to fly a spacecraft that would be as precise Pioneer because there is evidence for the possibility that maybe our Solar System is surrounded by dark matter,” Turyshev says.

Editor’s note: The story has been updated to make clear Turyshev worked in a team at NASA.