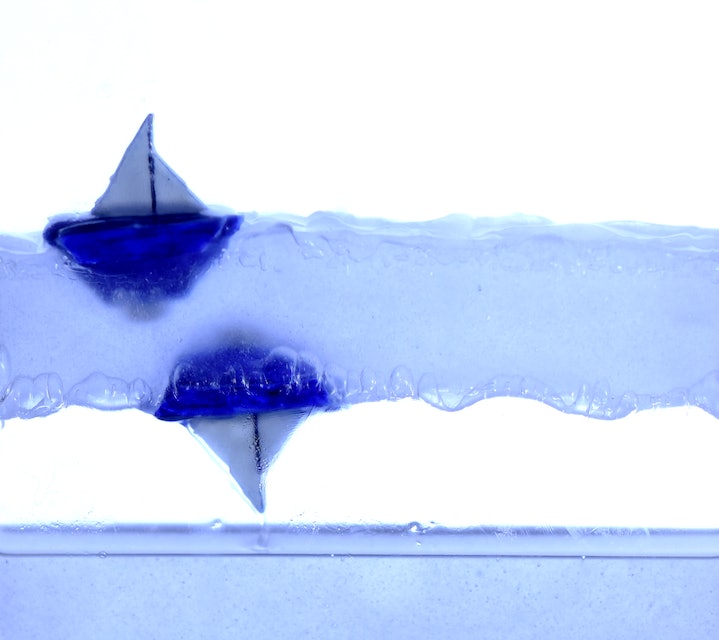 It was over 2,000 years ago that Archimedes allegedly ran naked and dripping wet through the streets of Syracuse, Italy exclaiming "Eureka!" in exaltation over the discovery of a fundamental physical phenomena: buoyancy. This push and pull between gravity and the "buoyant" upward forces of a liquid are what keeps ships at sea (and, in the case of Archimedes, helped uncover a fraudulent royal crown).

But, while this discovery may be ancient, a team of French physicists has now discovered a new kind of buoyancy that they call "anti-gravity." In both theoretical and experimental trials, the researchers found that objects, such as small toy boats, could float on the opposite side of levitated fluids instead of falling down due to gravity.

The cause of this bizarre physics discovery? Good vibrations.

Scientists have long known that vibrating a medium, like a body of water, at just the right frequency can cause strange physical properties to arise. Famously, Russian Nobel laureate and physicist, Pyotr Kapitza, discovered in 1951 that applying vibrations to a pendulum could create a secondary stable equilibrium point. While a normal pendulum swings down from left to right with gravity, Kapitiza's vibrating pendulum could do the same, but pointed upwards, seemingly against the force of gravity.

In a new study, published Wednesday in the journal Nature, researchers discovered they can create a similar anti-gravity effect for buoyant objects by vibrating and levitating dense liquids in an enclosed glass chamber. Much more than a 'gotcha' to gravity, the scientists write exploring this phenomenon could have ripple effects in chemical engineering, where scientists use bubble filled columns as bioreactors.

"This counter-intuitive upside-down buoyancy phenomenon suggests that the stabilization of Rayleigh–Taylor instability through vibrations can be considered not only in itself but also as offering opportunities for new experiments in unexplored conditions," write the authors, referencing a phenomenon that occurs between liquid surfaces of different densities, as their experiment used.

How did they do it — This kind of inverse buoyancy isn't something you're likely to observe in the wild, so instead the researchers created a highly tuned research environment using a glass chamber, glycerol and silicon oil, and a vibrating plate.

In a "normal" environment (that is, one without extra vibrations) we would expect a highly viscous fluid like glycerol to slowly ooze down the sides of an inverted, air-filled chamber, and settle at the bottom, displacing air that had originally occupied the bottom of the chamber.

But if the chamber is vibrating rapidly, the researchers found that viscous liquids never quite reached the bottom of the chamber — instead, they levitated above it on a cushion of air.

In their experiment, that team created two of these levitating liquids. Unlike the "normal" scenario in which gravity was the primary force controlling the movement of fluids in the chamber, in the vibration scenario, the levitating layers feel both downward pressure from gravity as well as an upward force from the pressured air they've created below them.

It's this push and pull of forces the scientists say is key to the anti-gravity effect.

The researchers demonstrate the bizarre effects of these levitating liquids using two small toy boats. With the help of a magnetic pointer, they coaxed one boat to the top of the liquid and the other to the bottom. In a non-vibrating environment, we would expect the top boat to float (thanks to Archimedes' principle of buoyancy) and the boat on the underside to fall to the bottom of the chamber.

But, in these experiments, researchers observed that both boats floated on their respective surfaces, with the lower boat sailing upside down on the underside of the levitating liquid. They also observed that this was a stable state for the boat and that moving it around using the pointer did not cause it to fall.

Is physics broken? — The researchers were able to validate their results with theoretical calculations as well, meaning that this event was not simply a fluke but instead a fundamental characteristic of how vibrations affect dense liquids. The researchers are excited about what other bizarre states like this might exist in the fields of chemistry or biology, they say in the paper. Discovering what anti-gravity could mean in these fields offers great potential for future research, write the authors.

Abstract: When placed over a less dense medium, a liquid layer will typically collapse downwards if it exceeds a certain size, as gravity acting on the lower liquid interface triggers a destabilizing effect called a Rayleigh–Taylor instability. Of the many methods that have been developed to prevent the liquid from falling, vertical shaking has proved to be efficient and has therefore been studied in detail. Stabilization is the result of the dynamical averaging effect of the oscillating effective gravity. Vibrations of liquids also induce other paradoxical phenomena such as the sinking of air bubbles or the stabilization of heavy objects in columns of fluid at unexpected heights. Here we take advantage of the excitation resonance of the supporting air layer to perform experiments with large levitating liquid layers of up to half a litre in volume and up to 20 centimetres in width. Moreover, we predict theoretically and show experimentally that vertical shaking also creates stable buoyancy positions on the lower interface of the liquid, which behave as though the gravitational force were inverted. Bodies can thus float upside down on the lower interface of levitating liquid layers. We use our model to predict the minimum excitation needed to withstand falling of such an inverted floater, which depends on its mass. Experimental observations confirm the possibility of selective falling of heavy bodies. Our findings invite us to rethink all interfacial phenomena in this exotic and counter-intuitive stable configuration.