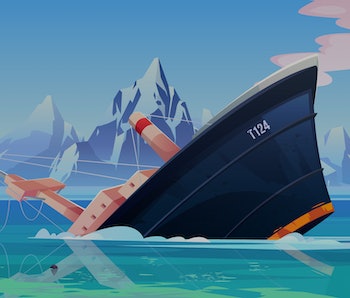 Animals are better than us at a lot of things, including evolving ways to practically walk on water. Scientists have now studied two such animals, the diving bell spider and fire ant, in order to learn these secrets and potentially use them to build unsinkable ships and emergency floatation devices.

The research, published Wednesday in the journal ACS Applied Materials and Interfaces, describes the theoretical and experimental process scientists went through to learn from these animals and apply those lessons to a trial material. The researchers started with a contraption made by attaching two thin, aluminum plates together by a post through the middle and applying femtosecond laser bursts to etch small groves on the surface. These grooves made the surface superhydrophobic by allowing it to capture air and repel water.

This approach itself is not new, but prior to this research it did suffer from two serious pitfalls. First, despite their hydrophobic nature the surfaces will get wet eventually. Second, abrasion from the environment will wear down the purposeful etching, rendering it ineffective.

In order to solve that problem, researchers from the University of Rochester in New York needed to imagine how animals, like the diving bell spider or fire ant, would keep such a surface afloat.

“That was a very interesting inspiration,” says Chunlei Guo, professor of optics and physics, whose lab made the material, in a press statement.

For the scientists, the main takeaway from these observations was that these animals were using their superhydrophobic limbs to capture air as well as repel water, unlike the etching approach researchers previously used which mostly just repelled water.

To put these traits into action, the researchers designed their structure with just enough of a gap between either aluminum plate to form an air pocket. They also strategically placed the grooved sides of the structure on the inside (surrounding the air pocket) instead of the outside where the water was. Having these grooves on the inside not only reduced wear and tear from the water, but the grooves were also able to trap the air in as well as repel water out.

In trials, the researchers found that even structures held underwater for up to two-months were able to float to the top once the weights were removed, proving that previous degradation of the surface’s superhydrophobic nature from other trials had been remedied. Even after being punctured, the structure was still able to float thanks to air stored in other parts of the structure or on the grooved surface.

While not yet ready for commercialization, the researchers say that there are several different areas this approach could be beneficial. There’s potential for unsinkable boats, puncture-proof life jackets, and as a form of protection for personal electronics against water. This could be a real chance the researchers write, to innovate “conventional floating devices and watercrafts that have been used for millennia.”

Water-repellent superhydrophobic (SH) surfaces promise nearly endless applications, from increased buoyancy to drag reduction, but their practical use is limited. This comes from the fact that a SH surface will start to lose its efficiency once it is forced into water or damaged by mechanical abrasion. Here, we circumvent these two most-challenging obstacles and demonstrate a highly floating multi-faced SH metallic assembly inspired by the diving bell spiders and fire ant assemblies. We study and optimize, both theoretically and experimentally, the floating properties of the design. The assembly shows an unprecedented floating ability; it can float back to surface even after being forced submerging under water for months. More strikingly, the assembly maintains its floating ability even after severe damage and piercing in stark contrast to conventional watercrafts and aquatic devices. The potential use of the SH floating metallic assembly ranges from floating devices and electronic equipment protection, to highly floatable ships and vessels.