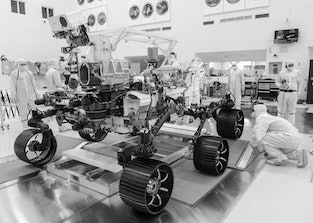 million names are heading to Mars

NASA’s Perseverance rover is getting ready to go to Mars, and it’s bringing millions of people along on its daring journey.

The team prepping the robot for its launch scheduled for July-August, 2020, had some final touches to put on its metallic body. The names of 10,932,295 people were etched onto Perseverance as part of NASA's "Send Your Name to Mars" campaign.

In May 2019, the space agency invited people to submit their names, and hitch a ride to the Red Planet onboard the 2020 rover. Those who submitted their names, including actor Brad Pitt, received a souvenir boarding pass and frequent flyer miles to Mars.

NASA previously invited the public to submit their names to be flown onboard its InSight mission to Mars. More than 2 million people got their name etched on the spacecraft, and received around 300 million frequent flyer miles for that trip.

Although it’s not really clear what those frequent flyer miles will add up to, one can hope it might put them on a first-class seat to Mars in the far future.

The (very, very small) names were stenciled by electron beams, and etched onto three tiny silicon chips the size of a fingernail. The rover also carried the essays of the 155 finalists in the ‘Name the Rover’ contest, which invited students to choose a name for the car-sized robot.

The winner was announced earlier this month, and the 2020 rover was officially dubbed as Perseverance by seventh-grader Alexander Mather.

The three chips carrying the names and finalist essays were then attached to an aluminum plate on the rover Kennedy Space Center in Florida on March 16.

But those aren’t the only body accessories on Perseverance.

The anodized plate also has a picture of Earth and Mars, joined together by their common host star, that was laser etched on. The graphic drawing pays tribute to plaques carried onboard other iconic NASA missions such as Voyager and Pioneer.

Despite ongoing concerns regarding the spread of the coronavirus, NASA is still on schedule to launch Perseverance to Mars this summer.

The Mars 2020 Rover will look for signs of habitability on the Martian surface and past microbial life, collecting samples of rocks and soil and setting them aside for a future mission to return them back to Earth.

The mission will also test out conditions for possible human exploration of Mars by testing a method of producing oxygen from the Martian atmosphere, characterizing environmental conditions such as water and dust on Mars and looking for resources.

The rover is set to spend at least one Martian year on the planet, the equivalent of 687 days on Earth.

NASA previously sent three other rovers to Mars, Spirit, Opportunity and Curiosity. Spirit ended its mission in 2010 — way past its planned 90-day expedition on the planet — while Opportunity tragically lost contact with Earth in 2018 after a massive dust storm swept over Mars.

Once it reaches Mars, Perseverance will join the Curiosity rover, who landed on Mars back in August 2012 and is still roaming the Red Planet to this day