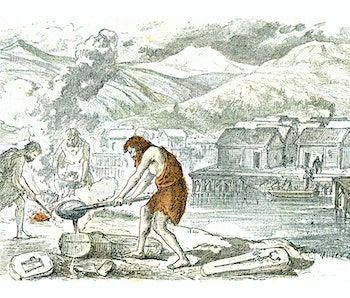 The invention of currency might pose one of humanity's oldest questions: When was it invented and who was the creator? Archaeologists curious about this ancient query have struggled to pinpoint the exact moment of money's inception. Until now.

A research team based in the Netherlands has uncovered a point in Early Bronze Age history that may have been the beginning of currency as we know it. They used a new method for detecting evidence of standardized weights and measures — the telltale signs of emergent currency. Civilizations some 5,000-4,000 years ago (3,000-2,100 BC) used the weight of these objects to measure and use them as money.

The discovery helps scientists better understand the society and emerging market systems of these ancient peoples, and how simple ax blades or bronze rings represented the first step to the trillion-dollar system of currency we have today.

Their findings were published Wednesday in the journal PLOS ONE.

The big idea — While money plays a huge role in shaping our social structures historically and today, it can be challenging to trace the movement and creation of these essential tokens before the invention of ledgers or even uniform weight measurements.

As a result, the authors behind this new study argue that any attempts at reconciling historic items and monetary tokens must take into account the limitations of these eras. For example, estimating the similar weights of metals or other precious materials likely wouldn't have been done with any kind of precise scales but instead by holding two items in hand and instinctually measuring their difference in weight.

This kind of measurement may sound objective (and it is, at least compared to modern scales,) but the authors write that by using an approach called psychophysics (which they describe as a "sub-field of cognitive psychology... concerned with the relationships between physical properties of stimuli and perceptual responses to these stimuli"), they can better understand this mindset and how it might've informed the creation of some of ancient Europe's original currency.

"A principal challenge at this point is to take the statistical tools employed to express accuracy and adjust them in accordance to the findings from psychophysics," write the authors. "In short, prehistoric weight units quite literally need to make sense."

What they did — In essence, the team's measuring technique was to compare the weights of bronze artifacts and to see how close their weights are to one another. If the weight of two items is within 10 percent of each other, then the researchers classify the pair's weight as being indistinguishable from one another by human sense alone.

This measure is called the "Weber fraction." (Read more about Weber's Law if you're curious.)

If enough of these rings, ribs, and ax blades have weights within these ranges, then the researchers hypothesize that this must have been intentional rather than accidental. This is supported by the idea that rings and ribs of metal had little other purpose and that ax blades were already a prized item.

What they discovered — To see how well this relationship held up in the real world, the researchers tested it out their theory on more than 5,000 bronze pieces, including ax blades, rings, and ribs, from more than 100 different hoards in Bronze Age Europe — ranging from Germany to the Czech Republic and Scandinavia.

The most striking discovery the team made when comparing the weights of these various items was that 70.3 percent of bronze rings — which total more than 2,600 items — all fell within a weight range of 176 to 217 grams. Using the Webster fraction, the team writes that these items are then indistinguishable from 195.5 grams.

This clear relationship wasn't the case for all items, but they did likewise discover that 71.6 percent of 1,106 heavy ribs (which they grouped separately from light ribs) coming from 13 different hoards were perceptibly identical to a rib weighing 185.5 grams. While ax blades failed to meet this level of similarity, the authors write that their weight similarity was still slightly higher than chance.

Why it matters — This weight-based similarity between items, as well as the bundling and replication of these items in hoards, led the authors to speculate that such items were intended to be used interchangeably as a form of currency.

"Though archaeologists have no insight in the transactions that took place, there can be no doubt that at least the rings and ribs conform to the definition of commodity money," write the authors.

If you've ever judged the value of something by its weight, you'd not unlike humanity's earliest people.

Abstract: The origins of money and the formulation of coherent weight and measurement systems are amongst the most significant prehistoric developments of the human intellect. We present a method for detecting perceptible standardization of weights and apply this to 5028 Early Bronze Age rings, ribs, and axe blades from Central Europe. We calculate the degree of uniformity on the basis of psychophysics, and quantify this using similarity indexes. The analysis shows that 70.3% of all rings could not be perceptibly distinguished from a ring weighing 195.5 grams, indicating their suitability as commodity money. Perceptive weight equivalence is demonstrated between rings, and a selection of ribs and axe blades. Co-occurrence of these objects evidences their interchangeability. We further suggest that producing copies of rings led to recognition of weight similarities and the independent emergence of a system of weighing in Central Europe at the end of the Early Bronze Age.