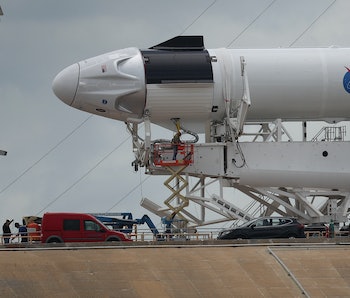 The first crewed mission for SpaceX's Crew Dragon is well underway, with NASA astronauts Bob Behnken and Doug Hurley set to make their journey to the International Space Station (ISS), more than 250 miles above Earth, at 3:22 p.m. Eastern on Saturday, May 30. (Wednesday's planned launch was scrubbed due to bad weather.)

Cramped into a tight capsule, Behnken and Hurley will test out the true potential of public-private partnerships aboard a test flight that could usher in a new era of space travel. And it could not have come at a better time, with the ISS needing some extra hands to conduct crucial science experiments onboard.

The two NASA astronauts will join a severely short-staffed crew onboard the ISS, with only three astronauts—two Russian cosmonauts, Anatoly Ivanishin and Ivan Vagner, and one NASA astronaut, Christopher J. Cassidy.

With a limited crew onboard the ISS, they have to spend more of their time tending to maintenance of the station and therefore have less time to spend on the various scientific research that takes place in the unique microgravity environment.

During its 20 years in orbit, astronauts have conducted over 3,000 experiments across different fields of science onboard the ISS.

The experiments range from growing lettuce to cultivating human organs or testing out the effects of long-duration spaceflight on the human body. There have also been some bizarre experiments sent up to space like slime and soccer balls, all in the name of science.

The ISS usually has a crew of six astronauts, four of which are typically NASA astronauts, that's double the number of people currently onboard.

Cassidy was the last NASA astronaut to fly onboard Russia's Soyuz spacecraft as the space agency moves towards launching astronauts from the United States rather than spend $80 million per seat. As a result, NASA has held off on sending more of its astronauts to the ISS until this current test flight is approved.

Once Behnken and Hurley make a safe return to Earth, NASA hopes to continue launching astronauts from US soil onboard privately built rockets and spacecraft.

NASA also hopes to use the commercial spaceflights to launch scientific cargo to the ISS on a more frequent basis, sending up a larger amount of scientific experiments and returning more samples back to Earth once the experiments conclude.

What's inside the capsule? Unlike previous flights to the ISS, which are packed with science payloads, this test flight may seem a little lighter but it's not completely empty.

The two NASA astronauts are taking an Earthly memento to commemorate the graduating class of 2020. NASA and SpaceX invited graduating students from different parts of the world to submit their photo. The 100,000 photos were used to create a mosaic of planet Earth, which was packed along for the ride to the ISS.

After launch, the NASA astronauts won't make it to the ISS until the next day. Good thing the capsule also has a handy Universal Waste Management System, or rather, a toilet, onboard.

Astronauts have long struggled to find a proper way to get rid of their waste during flight, with previous solutions mostly involving urinating in a bag and disposing of it later. Apollo astronauts reportedly left their bags of waste on the Moon.

Behnken and Hurley were originally scheduled to spend two weeks onboard the ISS, but it was later extended to a month so that they could offer extra helping hands to the current crew. The SpaceX capsule can only remain 119 days in orbit, afterward the efficiency of its solar arrays will begin to diminish due to oxygen atoms in Earth's upper atmosphere.