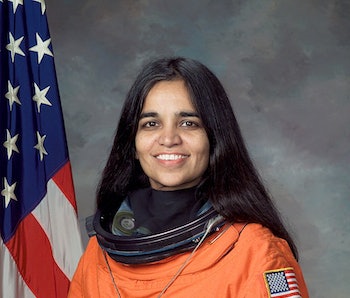 On Wednesday morning, the NG-14 Cygnus spacecraft will depart from the International Space Station (ISS) where it has been parked for the past three months. It was sent to deliver precious science cargo to the space laboratory floating 254 miles above Earth. Now the spacecraft will make its way back to Earth where it will (safely) burn in the planet's atmosphere.

This particular spacecraft is named S.S. Kalpana Chawla, in honor of an inspiring figure in space history — astronaut Kalpana Chawla, who died in the 2003 STS-107 space shuttle Columbia accident. As the first female astronaut of Indian descent, Chawla's legacy has inspired the next generation of astronauts and created a lasting impression for years to come.

The unmanned Cygnus resupply spacecraft, also known as NG-14, was manufactured and launched by Northrop Grumman Innovation Systems as part of NASA's Commercial Resupply Services program. It was designed to carry crew supplies, spare equipment, and scientific experiments to the ISS.

The NG-14 mission delivered nearly 8,000 pounds of supplies, scientific experiments, commercial products, hardware, and other cargo to the space station in October.

The company has made it a tradition to name each spacecraft after an inspiring figure who played an important role in human spaceflight.

The 13th Northrop Grumman Cygnus spacecraft was named after Robert Henry Lawrence, Jr., who became the first African-American astronaut in 1967 when he was chosen for the U.S. Air Force's Manned Orbiting Laboratory (MOL) program.

For the NG-14 mission, the company chose to honor Chawla, whose life work was dedicated to better understanding spaceflight dynamics. The former astronaut was responsible for developing efficient techniques to perform aerodynamic optimization as Vice President of Overset Methods Inc., Los Altos, California.

Who was Kalpana Chawla?

Chawla was born in Karnal, Haryana, India in 1962 and received a Ph.D. in aerospace engineering from the University of Colorado in 1988. She began working with NASA in 1988 as a powered-lift computational fluid dynamics researcher at the Ames Research Center. She was selected by NASA in December 1994 as an astronaut candidate in the 15th Group of Astronauts.

In November 1996, Chawla was assigned as the mission specialist and prime robotic arm operator on the space shuttle mission, STS-87.

Her final mission, STS-107 Columbia, was a science and research mission. During the 16-day mission, the crew managed to conduct nearly 80 experiments onboard the spacecraft, alternating shifts to pull off a 24-hour workday.

On February 1, 2003, the space shuttle Columbia disintegrated during its re-entry to Earth's atmosphere, killing all of the seven crew members onboard 16 minutes before they were scheduled to land.

A pioneer in her field, Chawla's inspiring legacy lives on today.

How can you watch the Cygnus launch?

The S.S. Kalpana Chawla will begin its departure from the ISS at 10:10 a.m. EST on Wednesday, January 6. Live coverage of the event will broadcast online for free via NASA TV, starting at 9:45 a.m.

The spacecraft has been docked by the space station's side for the past three months, but it still has a little bit left to its lifespan. Once it leaves the ISS behind, the Cygnus spacecraft will conduct a two-week test of emerging technologies known as SharkSat.

SharkSat will take measurements and beam those back Earth with the purpose of developing a Ka-Band software-defined radio, an alternate electromagnetic spectrum of radiation frequencies used by household appliances such as the microwave.

Ka-Band is a less crowded form of the electromagnetic spectrum, with the ability to transmit data hundreds of times faster than other bandwidths.

Following its two weeks of experimentation, the spacecraft will perform a safe re-entry to Earth's atmosphere where it will be burned up and disintegrated.

More like this
Innovation
5.2.2022 8:00 PM
Is Russia's withdrawal from the ISS a bluff? Why it’s too soon to say if it’s leaving
By Nathaniel Scharping
Science
5.9.2022 8:30 PM
Crew-3 Splashdown: Watch SpaceX’s Crew Dragon Endurance splash into the Gulf of Mexico
By Jennifer Walter
Science
5.13.2022 6:00 PM
Once a year, we get closer to NASA's Voyagers — here's why
By Elizabeth Howell
Related Tags
Share: