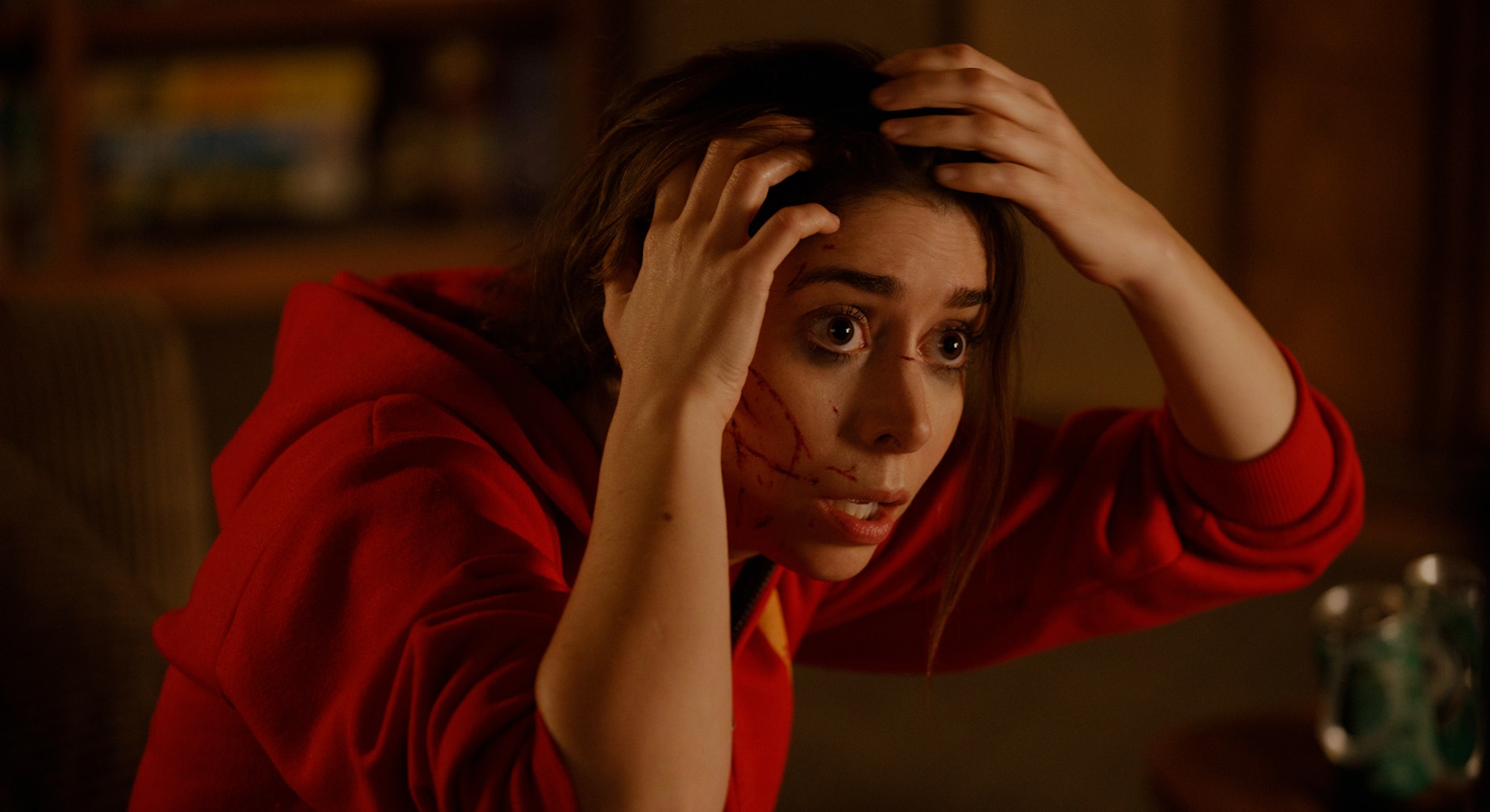 In one of the first scenes of Made for Love, Cristin Millioti runs away from her husband after he expresses a desire to implant a chip in her brain.

Millioti’s character, Hazel, has been living in seclusion with her husband, Byron (a wealthy, Elon-Musk-type entrepreneur played by Billy Magnussen) who wants to use brain implant devices to permanently link couples’ minds together. A highly glamorized ad describes “The Made for Love” chip:

“Now you and your loved one can truly come together. Every thought, every feeling shared. Your brains fully connected. A network of two.”

It seems like a ludicrous concept — could scientists actually use brain implants or artificial intelligence to connect and read minds? Inverse talked to four different neuroscience experts explain several concepts — some plausible, others less so — that are teased in the show, including:

Does the science in Made for Love stack up to the real thing? Not exactly, but if you look beneath the show’s wild, highly amusing antics, you’ll find glimmers of cutting-edge brain technology that exist in real life.

How Do Brain Implants Work?

Medical researchers and neuroscientists have used brain implants to treat patients with Alzheimer's, Parkinson’s disease, paralysis, and many other health conditions for decades. Scientists are also looking into brain implants that could treat blindness.

There are several kinds of implants — and not all of them involve digging deep into your brain matter. (The “Made for Love” chip is an invasive brain implant.) However, the level of brain implant technology that Byron creates — uniting two minds as one through a sophisticated microchip — in Made for Love is light years beyond where our current technology stands.

In real life, most invasive brain implants are electrodes or sensors inside brain tissue, though brain chips are sometimes used. A brain chip is a type of computer microchip that forms connections with nerve cells. The chip conveys information through this connection, which is known as a brain-chip interface (essentially, a type of specialized implant).

Miguel Nicolelis is the head of the Nicolelis Lab at Duke University. He tells Inverse invasive implants allow you to record thousands of signals firing from individual neurons simultaneously, making it possible to record and understand how disease manifests in different regions of the brain. Nicolelis pioneered this kind of technology. Since the late 1990s, he’s worked to show “it was possible to link brains to machines.”

“You can put an implant on the surface of the brain,” Nicolelis says. “This is called semi-invasive, and it is less risky because you don't break the membrane that protects the brain.”

What is a Brain-Computer Interface?

Before we can answer whether humans can read minds like in Made for Love, we need to understand BCIs, or brain-computer interfaces (also known as brain-machine interfaces).

A BCI typically requires some kind of device — which can include brain implants — to enable communication between the human brain and a machine. The chip in Made for Love would probably be considered a BCI since it hooks up the user’s mind to a computer or holographic device that allows other people to see through the subject’s eyes.

Andrew Hires, an assistant professor in neurobiology at USC and head of the Hires Lab, puts it simply (or, at least as simply as you can explain something like invasive brain implants).

Anna Wexler, an assistant professor in the Department of Medical Ethics and Health Policy at the University of Pennsylvania, says BCIs generally involve three elements:

Some BCIs are implanted through invasive or non-invasive means, but others only require electrodes (EEGs) to be placed on the surface of the scalp.

But invasive BCI technology poses risks to patients due to surgical complications — like the brain rejecting the implant or infections — involved with breaking the membrane barrier surrounding the brain.

It’s one thing to conduct experimental BCI procedures on animals, and another to work with humans. Nicolelis, whose research focuses on monkeys, is wary of tech entrepreneurs that promote BCI without fully understanding the medical ramifications.

“What I see is most of these guys talking about technology like if there is no human being behind what is going to be done,” he says, adding that human beings “cannot be reduced to an algorithm.”

Can We Read Human Minds with BCI?

It depends on how you define “mind-reading.” In Made for Love, Byron can use his two-person neural network to see through his beloved’s eyes, tracking her every movement along with her emotions based on the neurons firing in her brain. His chip also lets you gain access to another person’s mind using your own brain chip, though it’s suggested that actually linking two of those chips would kill at least one of the subjects.

Sara Goering, a professor of philosophy at the University of Washington with an expertise in neuroethics, tells Inverse that this technology really is being developed. Sort of.

“Certainly there is work being done on how to identify biomarkers or neural activity associated with mood,” she says, “and there’s evidence that neural activity from the visual cortex can be interpreted to identify some of what the individual is seeing.”

If we consider mind-reading a matter of simply scanning the brain with electrodes to identify which parts are associated with emotions like fear, sadness, and love, then we can technically “read minds” already.

Unlike in Made for Love, you probably don’t need to implant your spouse with a chip to gain access to their emotions — an electrode will do the trick just fine.

“It is possible today to use electrical recordings of brain activity to identify the mood of a person,” Hires says. Hires cites research published by Maryam Shanechi, who used algorithms to identify moods, based on the brain recordings of epilepsy patients.

But Nicolelis doesn’t really consider that sort of experimentation to be true “mind-reading.”

“He's not reproducing how that person reacts to the visual image,” Nicolelis says. “He just trains an algorithm to recognize the firing patterns of the neurons when they see a particular image.”

The researcher cannot digitally recreate the sadness or joy we experience from seeing these images, “because these concepts are abstractions that each one of us creates based on our prior life history that cannot be reproduced” through a computer,” Nicolelis says.

What About Brain-to-Brain Interfaces?

If you look outside of mind-reading, there is some potential to directly link human minds to communicate using what scientists call a “brain-to-brain interface.” This scientific concept directly aligns with the show, as Byron intends to directly link his minds with his beloved’s, allowing them to be in permanent, constant communication.

But real technology isn’t exactly on par with the highly sophisticated brain-to-brain interfaces in Made for Love.

“It’s very crude and not a transmission of high-level thoughts,” Wexler says. We can use brain-to-brain interfacing to communicate basic “yes” or “no” questions by directing your thoughts to another person.

Wexler explains how it works through a hypothetical analogy. For example, if you wore Wi-Fi-enabled glasses, you could turn to the left to indicate “yes” or to the right to indicate “no.” Those answers could then be signaled to another user’s Apple Watch in a different location. (It sounds far more exhausting than simply texting.)

Nicolelis invented a more sophisticated form of brain-to-brain interfacing technology known as BrainNet, which he describes as “a network of brains working together in the terms of motor behavior.”

“We combined the brain activity of three monkeys to control the three-dimensional movement of movements of an avatar arm,” Nicolelis explains. “BrainNet is the hottest area, in my opinion, in brain-machine interface right now,”

Other researchers have taken Nicolelis’ BrainNet technology and applied it to human-to-human brain interfaces to coordinate problem-solving in humans.

And in an earlier 2014 experiment, a researcher controlled his colleague's movements using electric brain recordings and magnetic stimulation, though Nicolelis says our capacity to control other people’s movements using these interfaces is still very limited.

For his part, Nicolelis is far more excited about the possibility of using BCI to better understand human connections on a bigger societal level — specifically, how they form social groups. Some of his recent research has explored what happens to brain signals in primate brains when they socialize.

“We saw that when monkeys socialize, their brains synchronize the electrical activity,” Nicolelis says.

Since humans and primates have a shared evolutionary history, Nicolelis even argues that “the entire history of human civilization depends on the formation of social groups through the mechanism of brain nets.”

The ethical controversy and the future of BCI

While some tech companies, like Elon Musk’s Neuralink, work to make BCI a commercial reality, the reality is that the technology won’t be ready any time soon.

“At this point, the main barrier is that we don’t have a functional, usable device in humans that can be easily translated outside of a laboratory setting,” Wexler says.

There’s a matter of value: Why would a healthy person want to undergo a possibly invasive, dangerous procedure for fun?

There’s no doubt that BCI has already helped individuals, particularly individuals with disabilities to improve their lives. Nicolelis developed one such BCI treatment for Parkinson’s disease, which involves placing a chip on the patient’s spinal cord.

“I think some of these innovations in BCIs are fantastic and offer the potential for improvements to human agency in ways that can potentially make a really positive difference for many people,” Goering says.

But there would have to be some significant improvement to your life or work for many other healthy individuals to consider BCI.

“For example, if you can type with your brain using a BCI, but it’s slower and less accurate than if you just typed with your hands, the device would be unlikely to gain traction,” Wexler says.

There’s perhaps an even more important — and tricky — question to consider: Should we do it?

“One of the issues might be what the AI is used for, and whether it is designed to aid or assist the person (with the human brain) in carrying out tasks, or whether it becomes something to struggle against,” Goering says.

Goering also cautions that we should “pay attention to the dimensions of the human experience of agency...that could be radically challenged by new forms of access to and potential for monitoring or manipulation of the brain.”

When it comes to linking human brains or reading our minds, there are obvious concerns about personal identity and privacy, Goering says. If the idea of someone hacking into your Facebook account freaks you out, how would you feel if someone hacked into your brain?

While some might get an adrenaline rush at exposing their mind to the world, most of us — like Hazel in Made for Love — would probably be horrified at the thought of our minds being fully exposed, even to our loved ones.

“For myself, I do not want to have my partner monitoring my mood neurologically, or seeing exactly what I see,” Goering says. “I’d prefer to remain the narrator of my unique experience, sharing what I care to relay, and preserving my own internal private space.”

Ultimately BCI technology may not be necessary to improve human relationships, and could instead, harm them.

“If you ignore the ethical and practical problems with deploying a BCI in a healthy human, you could plausibly read out their mood and interpret the feelings of another person,” Hires says, “but it would be easier to just look them in the eye and imagine what they are thinking.”

Made for Love is streaming now on HBOMax.