Large Hadron Collider: What the Higgs boson revealed to physicists.

“Every time a measurement becomes more precise, we can narrow down allowed models of New Physics ... so we get closer to pinning down possible physics beyond the Standard Model.” 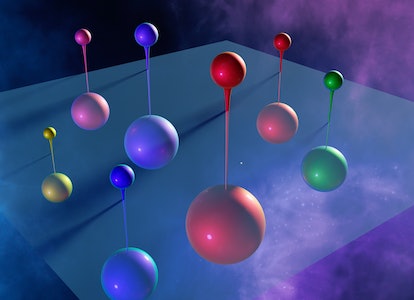 Summer 2012 was one for the books — the first Avengers film had just hit theaters worldwide, and arch-bop Carly Rae Jepsen’s “Call Me Maybe” was dominating the charts. And oh yeah, physicists across the ocean at CERN’s Large Hadron Collider (LHC) had just discovered a world-changing particle called the Higgs boson.

Theorized for decades leading up to its discovery on July 4, 2012, the Higgs boson is a subatomic particle that has the power to either confirm or shatter physics’ most comprehensive theory to date, the Standard Model. As the LHC begins its third atom-smashing run, scientists have taken to Nature to reflect on what a decade of Higgs research has meant for how we understand physics and the world it describes.

Giulia Zanderighi is the director of a particle physics group at the Max Planck Institute for Physics and co-author of a perspective published this week in Nature on the Higgs anniversary. She tells Inverse that CERN’s Higgs boson research is still probing the edge of scientific knowledge.

“Every time a measurement becomes more precise, we can narrow down allowed models of New Physics,” Zanderighi says. “So we get closer to pinning down possible physics beyond the Standard Model.”

Here’s the background — The Higgs boson is just one of 17 particles that call the Standard Model of particle physics home. This hodgepodge of particles includes familiar faces like the electron (classed as a lepton and fermion) and less familiar faces like the W and Z bosons. Roughly speaking, Standard Model particles are either the stuff that makes up matter (e.g., atoms) or a kind of particle called a boson that applies forces, like electromagnetism or nuclear decay, to other particles.

Altogether, theories explaining the interactions between these particles are the best yet description of how the subatomic world works.

The Higgs boson is the latest addition to this family. It fills in a crucial missing piece of the force puzzle by providing mass to particles through something called a Higgs field, which shares similarities with an electromagnetic field. Because it’s responsible for bestowing mass to particles, scientists are interested in not just confirming the Standard Model using the Higgs but in exploring “beyond” the Standard Model science as well.

“The Higgs boson itself may point to new phenomena, including some that could be responsible for the dark matter in the universe,” said CMS spokesperson Luca Malgeri in a statement.

What’s new — In a pair of papers published this week in Nature, CERN’s ATLAS and CMS collaborations have reported several new Higgs interactions based on data from the detector’s second run that further confirm the Standard Model as we know it. From trillions of collisions and the creation of millions of Higgs bosons, the teams isolated a collection of interactions between the Higgs and particles such as top and bottom quarks, Z and W bosons, and the tau lepton to confirm that they also receive mass from the Higgs field.

Thanks to improvements in instrument and analytical techniques over the past decade, Zanderighi says that the community is “very confident” in these results, despite unavoidable uncertainties in the calculations.

“These analyses are very difficult and sophisticated, but there are a large number of tests and validation procedures,” Zanderighi says. “One of the important aspects of these results is that they are confirmed by at least two independent experiments — ATLAS and CMS.”

What’s next — If you thought the first decade of Higgs data was impressive, scientists say you should hold on tight for the next decade. LHC’s Run 3 alone will produce 10x as many Higgs bosons as previous runs and provide scientists a huge opportunity to probe even more Higgs interactions to confirm Standard Model predictions, including interactions with light particles (like muons) and self-interactions between Higgs bosons.

Whether or not these observations will match Standard Model predictions or reveal new, hidden physics is yet to be seen, but regardless the next decade of Higgs research is sure to change physics as we know it.

More like this
Science
8.6.2022 5:00 PM
Earth is spinning too fast — the consequences for timekeeping may be unprecedented
By Andrew Moseman
Science
7.27.2022 6:15 PM
Look! This distant galaxy hosted the most powerful explosion since the Big Bang
By Kiona Smith
Science
8.1.2022 3:00 PM
After stellar ancestors exploded as supernovae, their stardust formed our Solar System
By Doris Elín Urrutia
Related Tags
Share: