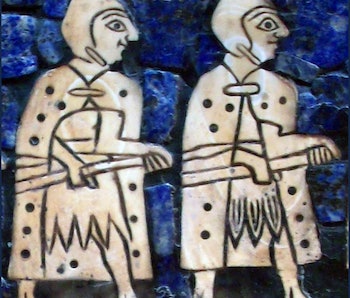 Beer is the all-American beverage, a liquid equivalent to pick-up trucks and deep-fried Oreos. But there’s a darker conception of the U.S. love affair with beer, one characterized by red Solo cups, college parties, and too much Sunday night football. I think beer is better than that, and ancient Sumerians living 5,500 years ago would agree with me.

A new study indicates royal Sumerians may have drunk beer from richly decorated straws made of precious metals. You can read all about it and four more surprising stories in today’s newsletter. I’m Ashley Bardhan, newsletter writer at Inverse. Crack open a cold one and get learning.

This is an adapted version of the Inverse Daily newsletter for Thursday, January 20, 2022. Subscribe for free and earn rewards for reading every day in your inbox. ✉️

Well, they’re more like beer straws. A new study recounts how modern archaeologists took a second look at an 1897 find — decorated, gold-and-silver tubes once thought to be scepters and now presumed to be, you know, beer straws.

“The breakthrough came when researchers found the supposed scepter’s inner filter curiously contained barley starch residue,” writes Elana Spivack. “The clue suggested something containing barley, such as beer, may have passed through these metal tubes.”

But it’s not all fun and beer; the straws may have also been key in local funeral rituals. The researchers suggest that “straws demonstrated one’s wealth and elite status. Aside from jewelry, the tubes were the objects placed closest to the deceased in the tomb,” writes Spivack.

This is why we care: If these “scepters” really are straws, they’d be the oldest straws ever found. They also provide insight into Sumerian dining, revelry, and respect — ancient civilizations, they’re just like us!

They did more than shotgun: Ancient Peruvian politicians partied way harder than we thought

NASA’s Curiosity rover has been dutifully racking up discoveries since being launched 11 years ago, but its latest one “could end up being a holy grail of planetary discoveries,” writes Inverse space writer Passant Rabie.

That holy grail is a carbon signature, which Curiosity found in rocks samples taken from Mars’ surface. Since the same carbon signature indicates biological processes on Earth, it’s possible it points to life on Mars.

“But before calling it a signature of life,” writes Rabie, “scientists are trying to understand what else may have been behind the carbon on Mars. Mounting evidence suggests that Mars may have been habitable at some point during its early past, with water on its surface and warmer temperatures.” And ancient, methane-producing microorganisms may have helped put complex molecules into Mars’ atmosphere.

This is why we care: Scientists can’t say with certainty Mars harbors life, either now in the past, but Curiosity’s curious finding helps point them in the right direction.

Ah, I see. You’ve had your fill of ancient Martian microbes, you’re tired of them. Can I interest you in primitive Martian protocells instead?

“Life on Earth is made up of cells,” writes Jennifer Walter, “but there was a time, billions of years ago, where these complex molecular structures didn’t yet exist.”

Researchers believe that protocells — simple, “spherical clusters” made of lipids — may have predated cells not only on Earth but also throughout the Solar System.

“By placing lipids on surfaces that mimic ones present in the early Solar System,” writes Walter, “scientists could also work out how these materials helped protocells arise.” They even placed lipids on a Martian meteorite sample. Protocells enjoyed growing there.

This is why we care: This is another great piece of evidence that billions-of-years-old Mars once hosted life. It also links Earth and Mars’ early biology in an unexpected way.

See it in real life.

Maybe Venus did, too?: A new study fuels ongoing debate on whether Venus is habitable

In the second part of Inverse’s coverage of Tajikistan’s climate emergency, writer Klas Lundstrom invites readers into the chill of the country’s hostile winters.

“Last winter, temperatures in Alichur and the surrounding areas nosedived to minus 140 degrees Fahrenheit,” writes Lundstrom.

“‘The snow was very deep, and nine feet of ice shielded the ground — impossible for animals to graze,’” said a local livestock breeder, “‘Many died of cold or starvation.’”

For Tajikistan, winter means streams of income are nonexistent, food is scarce and difficult to import, and as nearby glaciers run the risk of disappearing completely by 2050, the entire nation will continue to suffer.

This is why we care: This is an emergency, one that is stealing people’s quality of life as you read this sentence. It’s upsetting and demoralizing, but you shouldn’t underestimate the power of your motivation for change after reading it, either.

"This winter won't be any easier."

Explore the rest of the series: The climate crisis at the roof of the world

“Plato just moved a little closer to the future,” writes Inverse science writer Jon Kelvey. “The upcoming exoplanet-hunting mission under development by the European Space Agency (ESA) is named after the Greek philosopher. Like its namesake, it will look for the physical laws underlying planetary motions.”

PLATO will join international missions to find exoplanets, like our favorite James Webb Space Telescope, but with the specific goal of uncovering “worlds that hold the greatest chance of sustaining life,” writes Kelvey.

This is why we care: The launch won’t happen before 2026, but it’s something to look forward to, especially if you have interplanetary aspirations.

Or roving, if you prefer: Lunar rover spots mystery cube and more

Song of the day: “Moon Song,” by Phoebe Bridgers.