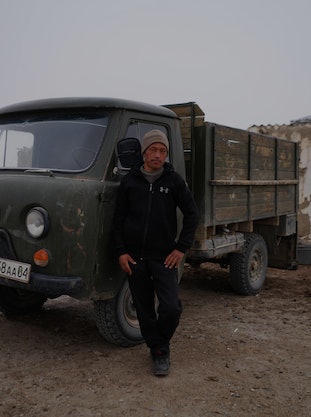 After a decade as a soldier in the Tajik army — and posted along border points to China and Kyrgyzstan — Jirgalber Lulbekov, 42, decided to make a living as a livestock breeder, like his father before him.

He started in 2018 and at his peak, owned 400 goats. His relatively new business helped him achieve a level of economic stability for his three young children. The future seemed bright. “Then,” he says, “the economy went to hell, and the climate soon followed.”

The Covid-19 outbreak — which began in neighboring China in late 2019 — and the subsequent border lockdowns by Tajikistan’s neighbors — Tajikistan’s capital, Dushanbe, is four times further from Lulbekov’s village of Alichur than the Chinese or Kyrgyzstan borders — meant steep increases in commodity prices on cooking oil, wheat, and gasoline coming from the faraway capital.

“This winter won’t be any easier.”

Then, last winter, temperatures in Alichur and the surrounding areas nosedived to minus 76 degrees Fahrenheit (-60 Celsius).

“The snow was very deep, and nine feet of ice shielded the ground — impossible for animals to graze,” Lulbekov says; most livestock in the area feed by grazing rather than being fed by keepers. “Many died of cold or starvation.”

Efforts by breeders like Lulbekov to import food from the capital failed, and livestock in the Pamirs mountain region didn’t like the less-salty feed that breeders could get from other areas. Instead, the animals kept on a futile forage for existing food and water in ice-thick soil. Many starved — Jirgalber soon found himself forced to sell off three-quarters of his livestock.

“I needed the money and sold at cut prices,” he says. “Now, all the money from the sale is gone, and this winter won’t be any easier.”

The temperature is rising faster in Tajikistan’s Pamir Mountains (elevation 25,095 feet) than the global average. These are the stories of the people living through our coming climate crisis, today. This series was supported by the Pulitzer Center.

The Pamirs’ newly extreme weather conditions are widely acknowledged as the results of glacial retreats driven by climate change. 1,000 out of Tajikistan’s 8,000 glaciers, that feed not only Tajikistan but also other Central Asian nations with fresh water through complex river systems, are in danger of melting, and a third run the risk to disappear entirely come 2050. The glacier area surrounding Alichur has retreated significantly since the turn of the century; by about 60 square miles — an area about the size of Minneapolis and double the melting rate during the latter part of the twentieth century.

And, despite colder winters, that’s because the Pamirs are warming overall: its average temperature has increased by about one degree Celsius (two degrees Fahrenheit) since the 1950s, outpacing the global average of 0.82 degrees Celsius. Climate change, then, is a two-headed monster of extreme cold winters and desert-hot summers.

“You can’t talk about seasonal cycles or transitions anymore — the weather’s too extreme now,” explains Lulbekov.

His father, Azizbek Lulbekov, 72, sees the changes quite clearly.

“Twenty years ago, this time of the year, you could still fish and store the catches for the upcoming winter,” the elder Lulbekov says. “I think last year’s cold killed all the fish; I haven’t seen any since last summer.”

It may happen again: in November 2021, the Gunt River on the edge of town was already covered under a thick ice blanket.

And the sole link to the outside world, the renowned Pamir Highway — or the M41, which traverses Afghanistan, Uzbekistan, Tajikistan, and Kyrgyzstan, is the second-highest altitude international highway on the planet — is a difficult trek in the best of times.

“To even get here’s getting harder with the early winters’ arrivals,” says Lulbekov. “Twenty years ago, it wasn’t like that at all.”

“It didn’t work during the Soviet era and wouldn’t work today.”

But the effects of climate change aren’t just experienced at the individual level in Tajikistan. Sixty million people depend on the Pamirs’ meltwater for drinking water and electricity; its glacial runoff irrigates the region’s large-scale production of cotton, rice, and wheat.

“In winter, there’s always the fear that water in the well will freeze,” says Lulbekov.

But for generations, livestock breeders have predominated in Alichur, a town of 2,000 people — mostly semi-nomads of Kyrgyz ancestry — at 13,000 feet above sea level. In summers, the town is nearly empty; its residents raise portable yurts in the areas their livestock graze along the mountains’ grassy slopes.

In Soviet-era Tajikistan, agriculture (including livestock breeding) was part of a collectivization model. Each family had its own livestock, but breeding, tending, and revenues were controlled by village-based cooperatives. People were entitled to winter feed, animal vaccinations, and veterinary check-ups, and were otherwise unable to operate outside the system.

After the Soviet Union collapsed and Tajikistanis voted for independence in 1991, collectivization was dismantled overnight. The Pamirs’ semi-nomadic herders were left without the state-subsidized financial resources they were used to. They were cut loose. But according to 72-year-old Azizbek Lulbekov, things are better today.

“I’d never want to join forces with other livestock breeders in a cooperative,” he says. “It didn’t work during the Soviet era and wouldn’t work today. People are too fixated on their own affairs.”

Collectivization also likely would not likely have helped the people navigate climate change — nor staved it off.

Life depends on water, and Gunt River has provided for Alichur’s population for centuries. Now, the river’s shifting runoff behavior endangers the water supply to wells, irrigation ditches and gardens, and settlements at hillslopes.

And while some in the Pamirs see the reduction in the size of the glaciers as a blessing in disguise — the region’s hydropower production companies, for instance — a large-scale thaw risks launching a Biblical exodus from isolated communities like Alichur.

Lulbekov doesn’t believe much will change for his family.

“My children will stay here,” he says. “Wherever you go in the world, there are problems.”

Despite their insistence that the family will remain, they don’t see a lot of hope.

“There’s no middle ground anymore,” Lulbekov says. “Only a struggle for life or death — and not just for the animals.”

This is part two in a three-part series: The climate crisis at the Roof of the World.

Correction: An earlier version of this article incorrectly described the temperature in the Pamirs as negative 140 Fahrenheit due to a conversion error from Celsius. However, -76 is still brutal.