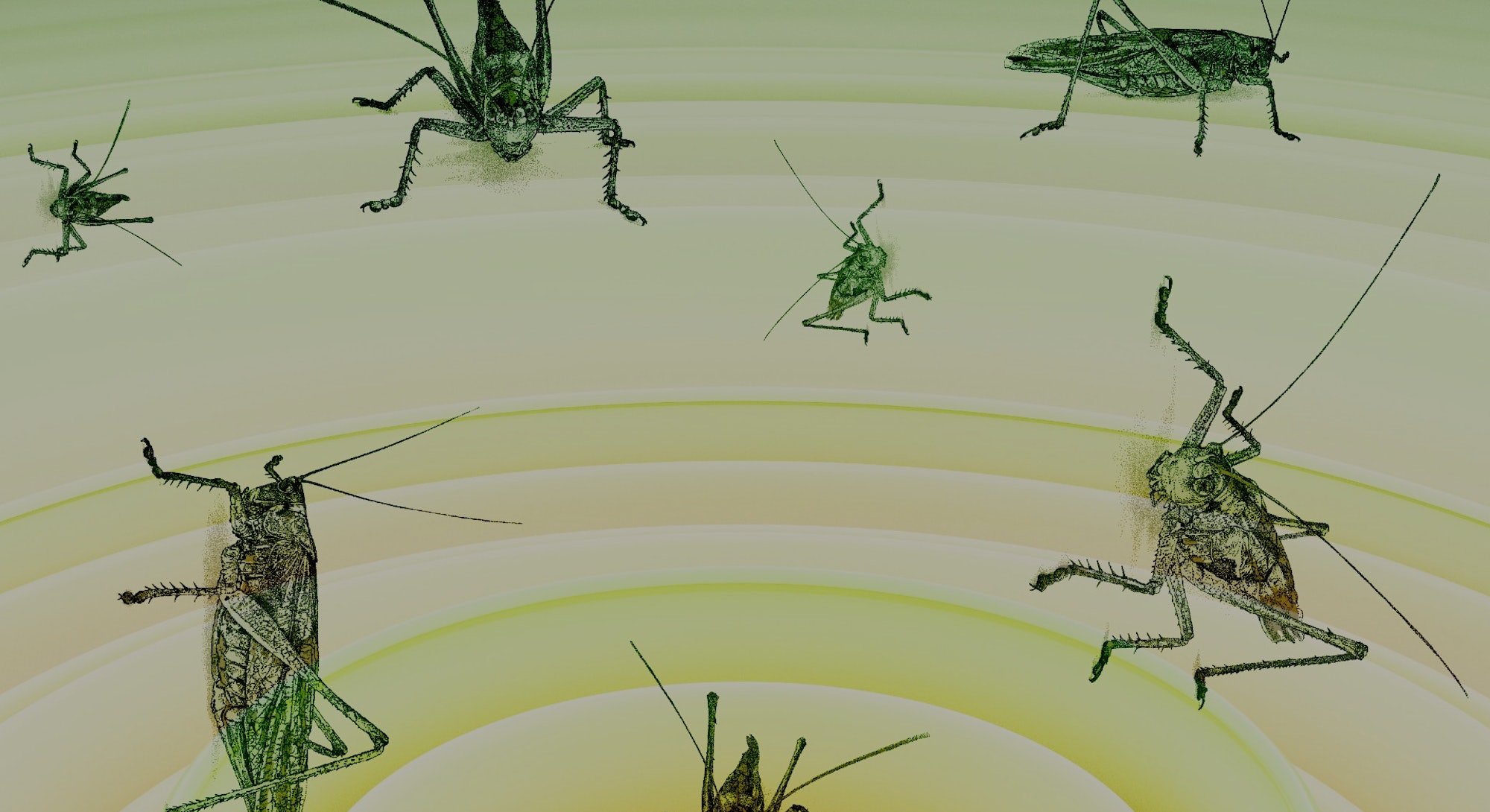 Back when she was a graduate student, Robin Tinghitella learned something surprising: Birds can deduce the genetic quality of potential mates through smell.

"I thought that was the craziest thing I had ever heard,” Tinghitella tells Inverse.

So began Tinghitella's career as a behavioral ecologist. Today, her research focuses on a cause-and-effect scenario with potentially calamitous results. Tinghitella, now an assistant professor at the University of Denver, examines what human-produced noise pollution does to insects.

Specifically, she studies crickets. Crickets, like birds, use a sense to find a mate: sound. The problem is, the call of cricket can be undermined by the human world.

It can spiral from there. Noise pollution puts whole ecosystems in danger, and rapid urbanization will likely make the problem worse. According to a United Nations report, 68 percent of the world’s population will live in cities by 2050.

Tinghitella’s team is working at full tilt to help the research community catch up. For these scientists, a cricket is not just a cricket — it’s a cornerstone of communities. If the cricket goes, scientists don’t know just what will happen — or disappear — next.

What is noise pollution?

The EPA defines noise pollution as an "unwanted noise or sound," but it's a bigger issue than just irritating hubbub. Millions of people suffer from the adverse effects of noise pollution every year — these can include disturbed sleep, chronic high blood pressure, and even hearing loss.

But noise pollution isn’t just a human problem. Animals get hurt, too.

Marine mammals, such as dolphins and whales, have been the focus of most eye-catching research on noise pollution’s ill-effects. As larger transportation vessels traverse the world's oceans more frequently as a result of globalization, the noise caused by ships negatively affects sea creatures' ability to reproduce, forage, and communicate through sound. Ice-free waters, a consequence of climate change, may also contribute to the problem — allowing ships to voyage through previously inaccessible seas.

But a preoccupation with charismatic megafauna may have left us unaware as to the extent of our influence on much smaller, yet still vital, creatures like insects.

The risk of ignoring bugs

Insects play an essential role in our ecosystem, from pollination to decomposition, but recent reports suggest insect populations are rapidly declining at a rate of 1 to 2 percent every year, largely due to the climate crisis.

"Insects are so incredibly important in food webs," Tinghitella says.

"In terrestrial food webs, we often find that insects comprise some of the lower trophic levels — in other words, they're eaten by lots and lots of other animals, and those animals are in turn eaten by others."

Noise pollution could become the biggest threat to these insects, which help maintain our global ecosystem that supports all animals and humans. Tinghitella says that the negative impacts of noise pollution on invertebrates can have cascading effects on any other organisms they encounter.

"Noise doesn't just affect insects,” Tinghitella says. “It affects all those other organisms, too."

Tinghitella studies how behavior contributes to the survival and reproductive success of animals.

She runs the Tinghitella Lab, which includes both behavioral ecologists and evolutionary biologists to understand how certain evolutionary pressures — like predation or environmental changes – shape animal communication.

"My lab is really interested in understanding the evolution of animal communication systems broadly," Tinghitella says.

“I got interested in how is it that crickets — these little inch-long things that I never paid much attention to at all — were making these really complex, meaningful decisions based on information that they gleaned from little tiny components of the songs that males were singing to them,” she says.

“It was just wild to me that this could happen.”

The call male Pacific field crickets use to attract mates.

Tinghitella and her team study the effect of noise pollution on crickets — specifically on their ability to reproduce and on traits found in their offspring. Her work aims to understand how noise pollution experienced during developmental years influences adult communication and reproduction.

Tinghitella once hypothesized crickets would be better at overcoming traffic noise as adults if they encountered noise pollution in their early development. But she found the opposite.

"Females that were searching for mates as adults were actually hindered by the noise that they encountered earlier in life when they were just juveniles developing," Tinghitella says.

Tinghitella lab technician Sophia Anner tells Inverse the process for one mating experiment, which investigated how noise pollution affected the next generation of crickets, involved playing traffic noise from incubators. The team calls these “Frankenbators.” The goal was to see if the sounds of traffic disrupt the cricket's attempts to reproduce.

"When we get to the lab, we pop open the doors of our four incubators to make sure the appropriate traffic sounds are still playing continuously inside of them,” Anner says.

To do the work, Anner first carefully picks up the crickets old enough to mate. Then the crickets are transferred into empty deli cups, where they can begin the day's mating experiments. For example, a female cricket might be placed with male cricket which has been exposed to man-made noise.

Other experiments focus on how noise pollution can alter male cricket's fertility. For example, the researchers examine the sperm quality of males. Under a fluorescent microscope, live sperm light up green, and dead sperm appear red. The question is if the dead sperm are somehow connected to noise pollution.

“Survival of the fittest”

Will the crickets just adapt to the growing noise pollution? It's not really that clear-cut, says Tinghitella. It depends on the genetic variation in the population.

"In order for organisms to adapt to a situation, there actually has to be variation in whatever the trait is," Tinghitella says. “[Adaptation] is totally dependent on whether there are individuals that possess already versions of traits that would be beneficial in those contexts."

But crickets, which produce songs to communicate — males specifically use songs to attract mates — have less built-in flexibility to adapt than some other animals. This has to do with the hardened structures on their wings, which they use to produce sound.

"We call it storage elation,” Tinghitella says. “They take a little hardened region of one part of the body, and rub it across — like the teeth of a file — on another part of the body.”

"What that means is that the animal doesn't actually have as much of an ability to flexibly adjust the way that that song sounds,” she says.

This makes it difficult when crickets encounter man-made challenges. As cities continue to flourish, there’s little time or power to adapt to the changing soundscape.

The future of noise pollution research

But to really understand the impact of urban noise pollution on insects, you also have to understand how insects communicate through the ground.

Noise passing through the so-called “substrate” — the layer underneath where an organism grows or lives — also can harm insects.

Inverse spoke with two researchers who are conducting research in this emerging, little-known area of scientific research. Their studies, along with the work conducted by Tinghitella and her team, add to the knowledge needed to solve the problem.

Maggie Raboin, a Ph.D. candidate in Environmental Science Policy and Management at UC Berkeley whose dissertation focuses on this subject, tells Inverse that noise vibrations passing through substrate can be felt as far as 3,000 meters away from the source.

Some noisy human activities include airport traffic, construction, and railroads — all of which produce low-frequency vibrations that can disrupt and interrupt animal communication. More than 90 percent of animals on Earth communicate using vibrations that travel from their body through a substrate, Raboin says.

Invertebrates, like insects, have evolved special body parts for hearing substrate vibrations. They rely on these substrate-borne sounds to collect information, mate, hunt, and avoid predators.

It's possible that certain human-generated, underground noises — like, say, the subway — disrupt insect communication, but scientists don't know for certain.

"At this point, we know very little about how anthropogenic noise can disrupt substrate communication," Kasey Fowler-Finn, an assistant professor in the biology department at Saint Louis University and head of the Fowler-Finn Lab, tells Inverse.

But based on how the insects communicate through vibrations sent through the ground, Fowler-Finn says, “it seems very likely that anthropogenic noise will therefore disrupt substrate-borne vibrational communication."

How can we stop noise pollution?

There is some hope for the future, Tinghitella says. Individuals can take steps to reduce their own personal contributions to noise pollution.

"When I talk to folks about this work, I always say that I think one of the most important things you can do is just try to pay attention to your own surroundings and notice the noise," Tingitella says.

She likens the effects of noise pollution to light pollution.

“Try to pay attention to your own surroundings and notice the noise.”

Picture yourself looking out a window overlooking a big city at night. Millions of lights light up individual homes and businesses, making it hard to see the night sky. Noise pollution is just as damaging but in a less obvious way.

If we really pay attention, we can find noise pollution all around us — whether it’s the humming of an engine or the rattling of an old AC unit. Once you're aware of these noises, the next step is pretty easy: turn off your noisy devices when not needed. Practice mindfulness with regard to the environment.

“I would just start by noticing these things and turning off whatever the heck you can, right?” Tingitella says. The crickets might sing in thanks.