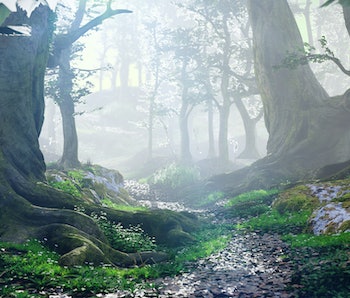 Mammal brains, unlike bones, do not fossilize. This fact presents a conundrum for scientists trying to understand how we came to be how we are.

For example, scientists have long argued over how humans became able to speak — if only they had an ancient brain to settle the debate!

But with no time machine, scientists must resort to what they have available, like the brains of animals today that closely resemble the long-extinct ancestors to us. Modern animal brains can open the door to history, and scientists use them to infer the workings of ancient minds.

And so, in a new study, researchers in the United Kingdom have come to posit something rather spectacular about the very old brain: The origin of language in the brain is 20 million years older than we thought. That's quite a sizeable jump from the 5 million-year-old guess of earlier studies.

In their research, scientists analyzed open-source brain scans and conducted their own scans on humans, monkeys, and apes. They "identified homologous pathways originating from the auditory cortex," state the authors in their study, which was published Monday in the journal Nature Neuroscience.

Scientists assumed this pathway developed in the human brain 5 million years ago. However, new observations across all three species (monkeys, apes, humans) date the emergence of the neural pathway to back to when humans last shared an ancestor with the macaque monkey, which was at least 25 million years ago.

What is this neural pathway? In human brains, the arcuate fasciculus is a bundle of fibers and a neural pathway connecting the brain’s expressive and receptive language areas. Chimps have a similar bundle for this in their brains as well. In biology, this is called a homolog, and it's a shared structure or genes because of a shared ancestor.

What wasn’t known was whether monkeys have a similar pathway — a situation that senior author Christopher Petkov, a professor of comparative neuropsychology, describes as “highly controversial but important to resolve.”

Part of this controversy lies with the fact that some scientists think that the human language pathway can only be studied in humans, Petkov tells Inverse. His team questioned whether such a pathway hadn’t yet been found in monkeys because scientists weren’t looking in the right place.

Hidden in the brain — They predicted that the pathway could be hiding in the auditory system of the brain. So they examined brain scans taken of macaques, chimpanzees, and humans, specifically examining the auditory cortexes and brain pathways.

In turn, they discovered that both apes and monkeys had their own version of the human language pathway — the arcuate fasciculus. Petkov describes the discovery as “really quite a surprise.”

They also found that in human brains, the left side of the pathway was stronger, and the right side involves non-auditory parts of the brain. The same is not true when it comes to how the pathway works in monkey and chimp brains.

The team predicts that the auditory system of an even more distantly related primate species will either show it was 25 million years ago when this pathway first appeared — or it’s possible that the origin of this pathway could be even older.

While this study illuminates a key part of human evolution, it can also directly help people today. Petkov says that this study has already inspired studies being conducted on neurology patients, whose language abilities have been affected by either stroke or brain degeneration. This discovery suggests to people in that field that they should look at this auditory pathway when aiming to help those patients.

“Language can be spoken, written, or signed, but if some of these pathways are more or less intact, that might provide a venue for a more accurate prognosis of language recovery and new ideas on rehabilitation to improve language abilities,” Petkov says.

Abstract: The human arcuate fasciculus pathway is crucial for language, interconnecting posterior temporal and inferior frontal areas. Whether a monkey homolog exists is controversial and the nature of human-specific specialization unclear. Using monkey, ape and human auditory functional fields and diffusion-weighted MRI, we identified homologous pathways originating from the auditory cortex. This discovery establishes a primate auditory prototype for the arcuate fasciculus, reveals an earlier phylogenetic origin and illuminates its remarkable transformation.