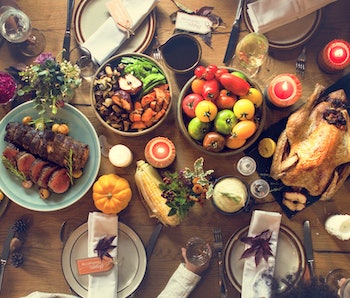 With many of the links in the food supply chain broken because of Covid-19, there's both an oversupply and shortage of food in America. Farmers are dumping millions of gallons of milk and smashing thousands of unhatched eggs daily.

While all this is happening, people are cooking more: Since the beginning of social distancing, 47 percent of people are eating more meals at home, according to a report by the International Food Information Council.

Researchers say reducing food waste will require a shift in the way people shop, cook, and think about food. That's tantamount to stretching base ingredients over multiple meals. It's prioritizing eating everything in your freezer. These behavioral shifts may just stick around in a future without a pandemic going on.

Cooking during a global pandemic — Brian Roe is a professor at Ohio State University who studies agricultural and environmental economics. He tells Inverse that the global pandemic changed so many factors at once that it’s difficult to say how, exactly, food waste will be affected.

For instance, many people’s daily schedules — a factor that usually drives food waste — have drastically changed, and now those people, once used to a hectic schedule, might find themselves with more time to cook. Others may have even less time than before because their jobs or children require more of their time.

We also won’t know what will happen with all the food people stocked up on when the pandemic began, Roe says. Five years down the road, homeowners could enter the back of their pantries only to re-discover the pasta or beans they bought during the pandemic. Whether that pasta gets boiled or tossed out will determine the long-term effects of hoarding shelf-stable foods.

In the short term, here are a few tips to reduce food waste at home.

Addressing waste at home — Reining in the amount of food you throw out means thinking differently about how you’re running your kitchen, Roe says. Home cooks can take notes from restaurants, which have a financial incentive to use everything in stock.

At home, that could translate as creating a “daily special” to get rid of something in your fridge before it spoils. Websites like Supercook and MyFridgeFood have tools that generate recipes based on a handful of ingredients you can plug in. (Another source of inspiration could be the zero-waste cookbook Amazing Waste.)

“You want to start thinking a bit more like a restauranteur,” Roe says.

Consider how you can make leftover ingredients last, Roe says. If you cook salmon for dinner, the leftovers can be incorporated into a salad, pasta dish, or omelet. With the leftover carcass of a rotisserie chicken, you can make a mean chicken stock for soup.

“It’s a real challenge, but it is a skill set that many have mastered in the culinary world — and probably more and more are beginning to master in the home-world as well,” Roe says.

Dr. Mark Hyman, a physician and author, says a driver of food waste at home is a lack of information. Take “best by” dates on food packaging. People refusing to eat food after that date has passed leads to “massive” food waste — all based on a misconception.

With the many changes brought on by the pandemic, food waste is a shift that’s easier to control than most.

“I think there’s some pride in being able to say, ‘I’ve used everything in my refrigerator, and now I can feel good about going out and buying more,” Roe says.

Tech solutions and human adaptation — Apart from changes in behavior, new technology can also help to extend the shelf-life of food — both in the grocery store and at home.

Materials scientist James Rogers recently developed a spray made of plant-based lipids that, when applied to produce, can make fruits and vegetables last longer in stores. Coating the produce in the material limits the rate at which water and carbon dioxide are released, slowing down its natural process of decay.

“The biggest enemy for fresh produce is time,” Rogers, the CEO of Apeel Sciences, tells Inverse.

A time-lapse video on the company’s website shows how it can slow down the aging process.

A time-lapse created by Apeel Sciences explains how the product works.

For now, you can buy Apeel-coated produce in grocery stores across the US, as well as internationally in countries including Germany and Denmark. Though it doesn’t exist yet, it’s “entirely possible” that there will be an at-home version of Apeel in the future, Rogers says.

In the meantime, to make your produce last longer at home, one option already on the market is a product called FreshPaper. This is a sheet of material that looks like a paper towel. It’s infused with spices and botanical materials that help to prevent bacteria and fungus from growing.

Technological solutions, however, aren’t a one-shot fix, Roe says. It’s important to remember that it takes time for people to adopt and adapt to technology. Relying on tech alone to solve food waste won’t be enough.

“Anything that can help extend shelf life can be helpful,” Roe explains. “It can also lull people into buying more aggressively, though.”

Roe compares food-preservation technology to installing airbags in cars. Some research suggests humans responded to airbags by driving less safely, potentially offsetting some of the benefits of the safety measure.

Ultimately, reevaluating your own relationship with food and your spending habits is the best place to start.

“You’re changing a lot about how you’re running your home kitchen,” Roe says. “Remember to also add in steps that are reducing food waste.”