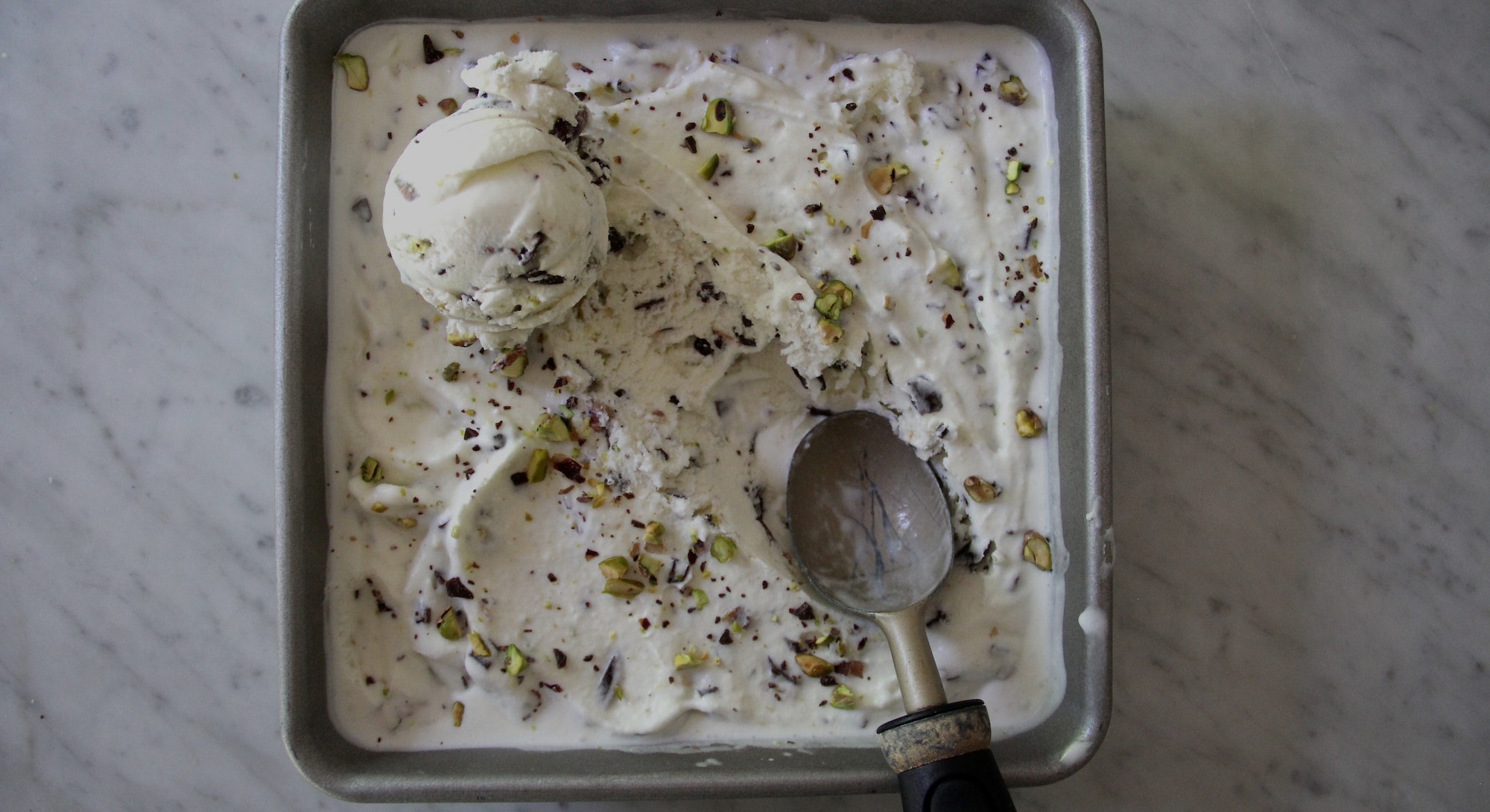 Have you had bad ice cream?

It doesn’t seem possible, but somehow it is. I know, because I’ve made it.

Last summer, I excitedly purchased a countertop ice cream maker, thinking that homemade sherbet and gelato would save me from the sweltering heat. I followed a recipe from a source that I trusted for a rich custard packed with egg yolks. To make things extra special, I swirled in some Luxardo cherry syrup during the churning process. After a few hours in the freezer, the result was a muddy-tasting grainy blob.

Unwittingly, I had made a few classic mistakes. This became clear after speaking with Michael Laiskonis, a Chef and ice cream obsessive at the Institute of Culinary Education. Chef Laiskonis has made ice cream in every possible setting, from high-tech labs to home kitchens. On the phone, he explained that with a few tweaks, home cooks can create the perfect scoop.

Chef Laiskonis compares making ice cream to balancing an equation. Each recipe should have the perfect ratio of fat, sugar, and water. These elements work together in harmony to produce a scoop-able product with a smooth and creamy texture. When one element goes up, another must go down.

At home ice cream recipes all start by creating a base. In its simplest form, the base is just milk, cream, and sugar. Sometimes egg yolks are added, and extra flavors are optional, but the key ingredients are just that. When I described the problems with my previous ice creams, Laiskonis suggested that my formula had been out of wack. “A lot of commercial recipes have too much fat and too much egg,” he explained.

Even though fat is key for creating luxurious creaminess, too much fat can create a textural problem during the churning process. Laiskonis drew a comparison to whipping cream. If you begin beating cream, you get fluffy whipped cream after a few minutes. If you were to continue to whip, the fat molecules in the cream would stick together and create butter. According to the chef, if an ice cream base has too much fat or is churned for too long, “you can get [...] fat colliding and clinging together [and] you’ll start to perceive that fat structure as being a bit gritty or grainy.” This is why most recipes call for a mixture of cream and milk. The addition of milk helps regulate the overall fat content.

An ice cream base is about 50% water. Even though it’s never added, water is present in other ingredients. Milk and cream are both made up of fat, non-fat milk solids, and water. To create a firm and scoop-able ice cream, you need the water to freeze. For a smooth texture, you’ll want to form the smallest possible ice crystals. Freezing the base as quickly as possible and breaking up the crystals while it’s cooling will keep the ice cream smooth. That’s where churning comes in. If you were to create an ice cream base and pop it in the freezer without churning, you’d end up with a very sweet block of ice. Unfortunately, home equipment can make this tricky.

Chef Laiskonis explains that, “from a technical perspective, an ice cream machine is a scraped surface heat exchanger.” Pour a base into a countertop ice cream maker and peek inside. You’ll see the cream continually freezing on the outer edges where it touches the drum. As the drum turns, a blade scrapes off the frozen portion and stirs it back into the center of the cream. This agitation process breaks up ice crystals and incorporates air. Professional machines can freeze two quarts of ice cream in about two minutes. Countertop machines take up to 30 minutes to freeze half of that amount. This slower freezing time gives ice crystals more opportunity to form. Home cooks can make up for this difference by starting with a very cold ice cream base. Chef Laiskonis recommends chilling the base in an ice bath and then resting it in the fridge for several hours, or even overnight. In addition to cooling the base, this gives the flavors time to meld.

Once the base is done churning, the challenge isn’t over. Laiskonis cautions, “as soon as you take the ice cream out of the machine, that’s the smallest the ice crystals will ever be.” You need to transfer the ice cream to the freezer right away. Here again, commercial equipment gives you an advantage. At school, Laiskonis works with a blast freezer that reaches temperatures of -20°F. Most home freezers hover around 0°F. This extra freezing gives the ice cream even more time to get frosty.

Chemically speaking, sugar plays a crucial role here. In ice cream, sugar has two purposes: It acts as a sweetener and regulates how much of the water will freeze. Laiskonis puts this in perspective: “When it gets snowy or icy in the winter, what do we put on the roads? Salt. [...] Salt will lower the freezing temperature of snow or ice so that it actually has to get several degrees colder to freeze. Sugars have the same effect on the freezing point of water […] to a lesser degree.” This is known as freezing point depression. Too much sugar, and the final ice cream will be too soft. Not enough, and it will be too frozen to scoop.

Laiskonis has some advice: use a recipe that calls for a mixture of glucose and sucrose, or granulated sugar. Glucose a lower sweetening power and less of an effect on freezing point than granulated sugar. By using both together, you can create a not-too-sweet base with a perfect texture. This information pointed to another problem with my earlier ice cream attempts: the cherry syrup. Any add-ins with high sugar content will lower the freezing point even more. By stirring in syrup at the last minute, I had unwittingly depressed the freezing point of my ice cream and started melting it before it was even done freezing.

Armed with my new knowledge, I selected a recipe from Hello My Name Is Ice Cream by Dana Cree, a choice that Chef Laiskonis enthusiastically endorsed. Cree’s base recipe uses a balance of sugar and glucose. It’s also stabilized by the addition of dried milk powder and cornstarch. According to Laiskonis, “virtually all serious ice cream makers are going to add additional milk solids” in the form of non-fat milk powder. “The protein in milk powder gives us mouthfeel [and] helps with the fat structure,” creating a pleasant texture in the finished product.

For a science-approved recipe, this process felt shockingly simple. The base ingredients came together in a few minutes. After dissolving the sugar on the stovetop, I placed it in an ice bath to chill out. Here, Laiskonis offered another home-friendly tip. Before rushing the base to the fridge, I placed it in a blender and whipped it for one minute. This vigorous mixing breaks up the fat particles and disperses them throughout the base, like an at-home homogenization process. This small extra step will help create a smooth finished texture. After blending, I moved the base to the fridge to chill overnight.

The next day, I assembled my countertop ice cream maker and removed the ice cream base from the fridge. While the churning process started, I chopped chocolate and pistachios to incorporate later. After about 20 minutes, the mixture was no longer liquid. Scooping a tiny bit out with a spoon revealed a soft serve-like texture: smooth, fluffy, and wonderfully creamy. I added the nuts and chocolate.

With the mix-ins incorporated, I got ready for action. Freshly churned ice cream has a short shelf-life. I wanted to get it to the freezer quickly to keep those ice crystals small. For faster freezing, I spread my soft ice cream out in a small baking pan. This is the final test of impulse control. The ice cream needs to firm up for about four hours before it’s ready to serve. Read a book, take a nap, or play a game. Whatever you do, don’t open the freezer.

That afternoon, I sampled my final ice cream and felt like I had acquired a superpower. The texture was perfect. It curled into a beautiful scoop and wasn’t even slightly icy. Best of all, the addition of the milk powder created an intense flavor that reminded me of sweet milk tea or even a malt ball. A few simple process tweaks made this ice cream even better than a store product. My fat sugar water equation was perfectly balanced, but it seemed that the balance of work to reward was massively skewed in my favor.