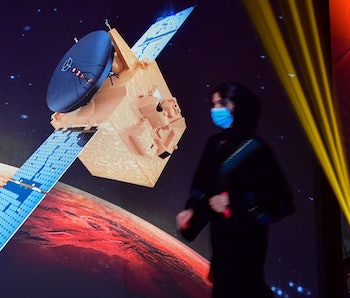 After seven months journeying through space, the Emirates Mars Mission's Hope Probe arrived at its destination on Tuesday. The probe's entry into Mars' orbit not only marks a major feat for a space mission, but it also marks the Emirates' entry into the space industry as a means of diversifying their economy.

For this wealthy Arab nation, space may be the new oil.

On Tuesday, the Hope spacecraft entered Mars' orbit, a feat accomplished by just 50 percent of all spacecraft sent to Mars. When the United Arab Emirates (U.A.E) announced the plan for the Hope probe in 2014, the country didn't even have a space agency. The success of this mission is a lesson in the power of going big, or going home.

The mission is historic, and brings the Arab World decisively into the space race — an area traditionally dominated by the United States, Europe, and China.

Here's a recap on the U.A.E.'s Hope mission to Mars:

Why it matters — The Hope probe is the culmination of an effort to put science at the forefront of the U.A.E.'s national priorities.

"We've never had the science and technology portfolio within the government until this mission."

Sarah bint Yousef Al Amiri is the chairperson of the U.A.E. Space Agency and minister of state for advanced technology. She tells Inverse that the mission represents a break with the past and a commitment to science.

"For us, we've never had the science and technology portfolio within the government until this mission was established," Al Amiri says.

"And for us, the Emirates Mars Mission was a method by which you can develop a sector that didn't exist before."

The U.A.E. target on Mars mirrors the efforts of the more traditional players in space. The Red Planet is at the heart of several ongoing missions, including NASA's Perseverance Rover, which is scheduled to land on Mars on February 18.

Danielle Wood is assistant professor of Media Arts and Sciences, and of Aeronautics and Astronautics at the Massachusetts Institute of Technology, as well as the director of the Space Enabled Research Group at the MIT Media Lab. She tells Inverse that the U.A.E.'s efforts to get to Mars represent a far greater idea: That investment in space exploration and technology are a means of sustainable development.

"You could say having technical knowledge about space can be translated to other fields," she explains.

"If you look at the history, there are certainly a lot of very interesting and economically impactful inventions that came from the Apollo program," she says.

"If you're a government, you want to say: 'Okay, we're gonna have a space program to fuel our economy.' You want to ask: 'How can we encourage small businesses to form, how do we encourage young people to study multiple fields?"

"The investments, they feed into broader public benefits, research, and I don’t know if they immediately generate profit right away but they do bring these public benefits internationally." Wood says.

The mission objective — "The sweet spot for us considering the timeline and the cost of this overall mission was a study of the atmosphere, and an understanding of the weather dynamics on Mars," she says. Essentially, the U.A.E. sought out a mission that filled the gaps left by ongoing missions, Al Amiri says.

Mars is a dry, desolate world today, but scientists believe it was once a warm, wet planet which may have hosted life.

To unlock clues about Mars' past, scientists need to understand the process by which the Red Planet lost its atmosphere (and, by extension, its water), something which likely happened over millions of years through a process known as atmospheric escape.

To figure out how gases like oxygen and hydrogen manage to escape through Mars' atmosphere and into outer space, the Hope Probe will observe Mars from a near-equatorial orbit, meaning it will be able to observe the lower and upper atmosphere of Mars at all times. The probe will collect data on the interactions between the two atmospheric layers.

The mission aims to determine how energy, dust, and different gases travel from the lower atmosphere to the upper atmosphere, essentially tracking how these essential gases may have been lost to space.

"What you're doing is you're fitting in different pieces of the puzzle across different scientific groups to answer different questions," Al Amiri explains.

The Mars probe was fittingly named al-Amal, which translates to Hope. The name is a nod to the desire to accomplish more than its scientific objectives, but inspire other countries to venture into space.

The U.A.E. is made up of seven emirates and located along the Persian Gulf. In the 1950s, the discovery of oil fueled the U.A.E.'s massive economic growth that made it one of the richest countries in the world.

However, as the global prices for oil decreased by nearly half of its previous value, the U.A.E is desperate to diversify its economic portfolio.

"Just like some countries invest in the infrastructure of hospitals or roads, investing in satellites can help them have a form of knowledge on forestry, fires," Wood says.

As it stands, there are few major players well-known in the space race; the United States, China, and Russia. However, countries from the Middle East rarely get to compete beyond Earth's orbit.

The U.A.E. has previously sent satellites into Earth's lower orbit through their national space program based in Dubai, the Mohammed Bin Rashid Space Centre. The Gulf state also crossed a major milestone last year, sending the first Arab astronaut to board the International Space Station.

However, a mission of this scale has never been attempted by the region before.

"We, as a nation, could have played it safe"

"We, as a nation, could have played it safe, we were going down a gradual trajectory of building our space program, bit by bit, using Earth observation satellites," Al Amiri says. "But if you want to become a global player, there's no getting ahead without taking on large risks.

"We're doing this front-and-center, on the global stage."

At the time that the U.A.E. signed off on this mission, they were well aware that 50 percent of missions headed towards Mars do not make it to the Red Planet.

"It was signed off as a program with those odds in mind because that's the only way you can change and shift an entire generation," Al Amiri says.

A new generation of space leaders

The Hope probe was not only a way to look to the future, but reflect on the past as well.

Centuries ago, Arab astronomers were at the forefront of space discoveries, with the names for many celestial object originating in Arabic such as the famous star Betelgeuse which was originally called ibṭ al-jawzā (or the armpit of the central one). However, over time, the region fell out of the global space race which was largely dominated by western powers.

Omran Sharaf, project manager for the Emirates Mars Mission, had to create objectives for the mission that would satisfy more than just the basic objectives of any other space mission.

"The requirement was not just to put something on Mars, it was about inspiring the Emirati youth, inspiring the Arab youth and using this project as a catalyst for a disruptive change in multiple sectors," Sharaf tells Inverse. "So when it came to actually formulating the solution, we had to think about it not just from a technical point of view but also from a strategic point of view."

Orbital insertion is perhaps the most critical part of the whole mission — six years of effort depended on those 27 minutes.

Now that the probe is in the capture orbit, it will settle into the right path to start conducting its scientific mission over the next two months. The spacecraft will begin gathering data in April, and will spend four years orbiting Mars.

"With this enormous milestone achieved, we are now preparing to transition to our science orbit and commence science data gathering,” Sharaf confirmed in a statement following Tuesday's news.

Already, the team on the ground say the mission is a success — it has helped stir the conversation on space science within the Middle East.

"For me, one of the valuable lessons that I've personally learned is the importance of taking on risk if you want to move the needle forward," Al Amiri says.

Wood agrees — she believes that the focus on the few major powers in space will soon shift to become more inclusive as space technology becomes more accessible.

"I do expect within the next decade or so to see a number of new countries [in space], whether with increased space activity or try something new," she says.

"And to do that, you need to have the ecosystem that incubates that and nurtures that, and this is an example of how things could be done," he says.

This article was originally published on Feb. 9, 2021