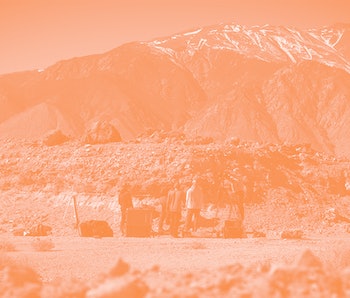 THIS WEEK MARKED THE 40-DAY MILESTONE until the launch window opens for NASA's Perseverance rover and its journey to Mars.

The launch window of July 20-August 11, 2020 to Mars. But before it lands on the Red Planet, the team of scientists behind the mission must to test out Perseverance's capabilities right here on Earth.

A team of seven scientists from the Perseverance mission headed to a dry lakebed in Walker Lake, Nevada earlier this year because the landscape is similar to Jezero Crater on Mars, which is the destination for Perseverance.

The Rover Operations Activities for Science Team Training, or the ROASTT, took place in February, 2020, and provided a source of responsive data for the upcoming mission before its launch. The team was roaming the desert for two weeks, along with two camera rigs and portable spectrometers, while carrying out commands from a remote team of more than 100 scientists around the world as though they were giving commands to the rover on Mars.

With the same approach that NASA scientists would take study rocks or samples on Mars, the seven-person team studied the dry Nevada landscape.

What makes a good Mars testing ground? — The dry, sedimentary environment of lake bed that was Walker is quite similar to the Jezero Crater on Mars, which is believed to have once been flooded with water.

Raymond Francis, a NASA engineer who led the researchers, says they needed to find just the right area. It had to have very few terrestrial interruptions, i.e., plants, because plants can give a sense of scale that won't be present on Mars -- the rocks will likely be out there all alone

"We wanted people to work with that problem of understanding scale," Francis explains to Inverse.

The on-the-ground team in Nevada also had to cover its tracks. They swept behind them, erasing their footprints so they don't give a sense of scale to the scientists watching through the cameras. (Suffice to say, footprints on Mars would be a whole other story.)

They also had to choose an unfamiliar area. There are a few well-known Mars analogue sites -- the Atacama Desert in Chile in one. However, this part of the Nevada desert has never been used for this type of research.

Similarly, the Jezero Crater has never been visited by a rover before.

"No one has ever seen what it looks like from the ground."

"The place that we’re planning to send the rover on Mars has been studied extensively from orbit, but no one has ever seen what it looks like from the ground," Francis says. "And things are very different at the rover scale than they are from the orbital scale."

The goal of the Perseverance mission will be to look for signs of ancient life on Mars, and understand the history of the planet that scientists believed was once a wet, habitable world.

"The place we’re going this time on Mars is different; we have high confidence that this place was a fairly long-lived lake with a delta in it," Francis says. "We have some high confidence in the mission."

The rover will also collect samples from Mars, stowing them away for a future return to Earth when they can be examined further.

Perseverance is set to land on Mars in February, 2021 and spend at least one Martian year on the planet — the equivalent of 687 days on Earth. And the team behind the mission is getting ready for it, even if under special circumstances of working from home until the launch window opens.

"We learned a lot from practicing this way, it greatly informed the way we’re gonna operate on Mars when the rover lands next year," Francis says.