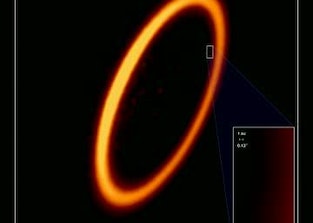 NASA, ESA, AND A. GÁSPÁR AND G. RIEKE (UNIVERSITY OF ARIZONA)
6

the number of years we thought a planet existed before it we leared it did not.

Disappearing planet? Fomalhaut b was never there in the first place.

In 2008, scientists announced the discovery of the first exoplanet that was visible to the eye in images taken from Earth. Fomalhaut b was the first exoplanet to make its presence known in this rather direct way, while other exoplanets could only be detected through their transit in front of their host stars or their gravitational tug.

However, six years later, and it seems that our eyes may have deceived us and that Fomalhaut b was never there in the first place.

A new study, published Monday in the Proceedings of the National Academy of Sciences (PNAS), suggests that what astronomers thought was a planet was actually a gigantic collision between two icy asteroids-sized bodies just 25 lightyears away from Earth.

The Hubble Space Telescope had observed the alleged planet in 2004 and 2006 as a visible moving dot. However, even back then, there was cause for suspicion.

Fomalhaut b had a 1,700-year, hyperbolic orbit around its host star, sort of like an escape trajectory, and got as close as 4.6 billion miles to the star during its orbit. It was also really bright in visible light, unlike any other exoplanet observed before since the objects tend to be too small to reflect enough light that can be seen from Earth. Furthermore, scientists couldn't detect any infrared heat signals from Fomalhaut b.

Debate over whether or not Fomalhaut b is a planet continued for years, but it was finally decided that it was in fact a planet in 2012.

However, two years later, this "planet" disappeared from sight, with Hubble no longer able to detect it in the cosmos.

“Clearly, Fomalhaut b was doing things a bona fide planet should not be doing,” András Gáspár, an astronomer at the University of Arizona, and lead author of the new study, said in a statement.

The team behind the new study went back to the old data collected by Hubble, analyzing it with fresh eyes.

And what they found was that Fomalhaut b never actually was. Instead, what the telescope was observing may have been a slowly expanding cloud that formed in the aftermath of a collision between two large bodies. The two bodies were likely made up of ice and dust, measuring around 200 kilometers across.

Hubble may have just missed this collision, as the study suggests it likely took place right before the first observations in 2004. The study also suggest that these types of collisions occur around the Fomalhaut star system once every 200,000 years.

“These collisions are exceedingly rare and so this is a big deal that we actually get to see one,” Gáspár said. “We believe that we were at the right place at the right time to have witnessed such an unlikely event with the Hubble Space Telescope.”

However, the reason why Hubble is no longer able to detect the debris of that collision is because it is below its detection limit, with dust particles that are around 1/50th the diameter of a single human hair.

The recent conclusion, while unfortunate, does explain some of the exoplanet's unusual characteristics like its hyperbolic path around its star, according to the study.

“A recently created massive dust cloud, experiencing considerable radiative forces from the central star Fomalhaut, would be placed on such a trajectory” Gáspár said, “Our model is naturally able to explain all independent observable parameters of the system: its expansion rate, its fading and its trajectory.”

Even though the discovery of new exoplanets continues, the strange and mysterious Fomalhaut b will still be missed.

Abstract: The apparent detection of an exoplanet orbiting Fomalhaut was announced in 2008. However, subsequent observations of Fomalhaut b raised questions about its status: Unlike other exoplanets, it is bright in the optical and nondetected in the infrared, and its orbit appears to cross the debris ring around the star without the expected gravitational perturbations. We revisit previously published data and analyze additional Hubble Space Telescope (HST) data, finding that the source is likely on a radial trajectory and has faded and become extended. Dynamical and collisional modeling of a recently produced dust cloud yields results consistent with the observations. Fomalhaut b appears to be a directly imaged catastrophic collision between two large planetesimals in an extrasolar planetary system. Similar events should be very rare in quiescent planetary systems of the age of Fomalhaut, suggesting that we are possibly witnessing the effects of gravitational stirring due to the orbital evolution of hypothetical planet(s) around the star.

More like this
Science
7.26.2022 6:44 PM
Mars Express: New images reveal the depths of the red planet's largest canyon
By Jennifer Walter
Science
15 hours ago
Webb Telescope discovers an “amazing” galaxy from the edge of time
By LAURENCE TOGNETTI and Universe Today
Science
8.6.2022 11:00 AM
450 million years ago, Earth’s magnetic field almost collapsed — the results would have been apocalyptic
By CAROLYN COLLINS PETERSEN and Universe Today
Related Tags
Share: