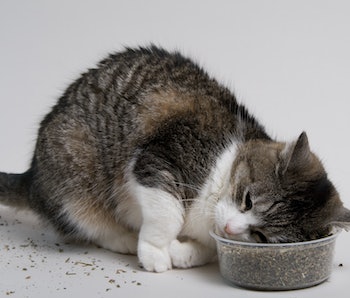 Why this plant affects cats so powerfully is newly explained by a study released Wednesday in Science Advances.

Catnip is technically called catmint, or Nepeta cataria. It's a plant in the mint family. Previously, scientists established that it evolved to have a pungent odor because that repels insects that want to eat it. This odor comes from a chemical called nepetalactone. It's inhaling this chemical that causes cats to be affected by the plant — that's why they often rub against and roll around with catnip.

In this new study, researchers examined the evolutionary history of nepetalactone.

After conducting genetic analysis on catmint, the team discovered that, over the course of its evolutionary history, catmint evolved to make nepetalactone not once, but twice.

This means catmint's ancestor plants actually stopped making nepetalactone at some point, then evolved a second time to create the chemical.

It's an example of "repeated evolution with a twist," the researchers write. While the nepetalactone chemicals have the same structure as other scent-producing molecules in the mint family, there are key differences.

Put into practice, that's why catnip sends your cat into a frenzy, and peppermint doesn't.

Study co-author Benjamin Lichman, a plant biologist at the University of York, says his team "discovered a suite of unusual enzymes" which are responsible for creating nepetalactone.

"These enzymes are not found in any related plant species and have evolved uniquely in catmint," Lichman explains.

Other types of mint, like peppermint, produce chemicals that are formed by just one enzyme. But catnip uses a double-hit: One enzyme activates a compound, which a second enzyme then picks up in a double-process.

Interestingly, within the catmint genome, the genes responsible for creating nepetalactone are located next to each other. They form a genetic cluster that gave the researchers clues as to why catmint is different from its relatives.

"This allowed us to solve the problem more easily," Lichman says.

Why cats go nuts for a mint plant — Catmint, or catnip, isn't really a drug. So why do cats have such a noticeable reaction to the plant?

The science behind the attraction has to do with the same strong scent that catmint has repeatedly evolved to produce. The strongly scented chemicals target receptors in cats' tissue, near their nose, and activate the same neural pathways as sexual pheromones.

Evolutionarily, the reason the strong scent is important is that it can have a similar effect on insects that eat catmint — like aphids. “We think that by producing these volatile compounds, the plant ‘confuses’ insects,” Lichman previously told Inverse, "which prevents them from landing on the plant and eating it.”

As far as the cat-exciting effect of catnip, there are other plants that cause a similar reaction. Valerian and silver vine can have a similar outcome. If you've noticed your cat taking a liking to your spider plant, it could be because the plant has a mild hallucinogenic effect on felines. (But don't worry, spider plants aren't toxic to animals.)

Abstract: Catnip or catmint (Nepeta spp.) is a flowering plant in the mint family (Lamiaceae) famed for its ability to attract cats. This phenomenon is caused by the compound nepetalactone, a volatile iridoid that also repels insects. Iridoids are present in many Lamiaceae species but were lost in the ancestor of the Nepetoideae, the subfamily containing Nepeta. Using comparative genomics, ancestral sequence reconstructions, and phylogenetic analyses, we probed the re-emergence of iridoid biosynthesis in Nepeta. The results of these investigations revealed mechanisms for the loss and subsequent re-evolution of iridoid biosynthesis in the Nepeta lineage. We present evidence for a chronology of events that led to the formation of nepetalactone biosynthesis and its metabolic gene cluster. This study provides insights into the interplay between enzyme and genome evolution in the origins, loss, and re-emergence of plant chemical diversity.

More like this
Science
6.22.2022 11:00 AM
Watch: These bats can memorize your phone ringtone, and it might help them hunt
By Jennifer Walter
Science
6.22.2022 8:26 PM
Yes, there are mites living on your face — and they can poop, a new study finds
By Allison Parshall
Science
7.2.2022 12:00 PM
Why is my cat scratching furniture? The answer might surprise you
By Tara Yarlagadda
Related Tags
Share: