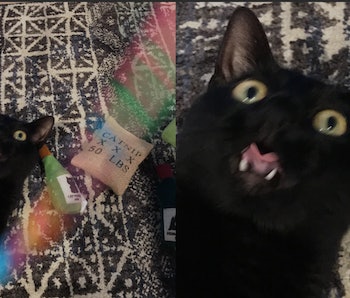 Though humans across the country are celebrating 4/20 by “smoking a doobie” or “dipping into the devil’s lettuce,” it’s not truly a party unless your cat gets to enjoy it, too.

Catnip (Nepeta cataria) is a perennial herb, specifically a member of the mint family. It’s been compared to marijuana because it looks similar to pot when both are dried, and it can produce a euphoric effect on some kitties. If your cat enjoys catnip, trust me, you’ll know.

Though different felines react to catnip in different ways — and sometimes, not at all — there are now so many ways for your cat to get a taste of the ‘nip, you might as well let them try it responsibly. I tell my cat I’d rather she do it in the house, around me.

Catnip comes in many different forms — loose, stuffed into toys, or even concentrated in liquid form. The oil within a catnip plant is what gives kitties the “high” feeling.

“Nepetalactone is a stimulant when sniffed by a cat, producing a “high” that is described as being similar to either marijuana or LSD. (How this was determined, I do not know),” veterinarian Jennifer Coates writes in PetMD. “When a cat eats catnip, it acts as a sedative, but when smelled, it causes the cat to go crazy. It is thought to mimic feline pheremones and trigger those receptors.”

Not all cats are affected by catnip. According to Cat Behavior Associates, the “catnip response” is hereditary, and one-third of all cats lack the gene that enables them to feel the high. Even a cat who does have the gene won’t be affected by catnip until they’re at least six months old.

It’s also important that cats don’t overdo it when it comes to the ‘nip. Frequent use can lead to the loss of a cat’s ability to get high. So if your kitty likes to party once in a while, make sure you’re getting high-quality stuff and storing it away, tightly sealed for freshness.

While catnip definitely won’t get humans high (don’t even think about it, you fool), on this special holiday, feel free to give your kitty a little treat. They deserve it for working so hard at protecting you in the bathroom and running around at 3 a.m.

More like this
Science
7.31.2022 1:00 PM
How do cats co-exist with each other? The answer may lie in their gut
By Tara Yarlagadda
Science
8.9.2022 10:30 AM
Is my dog depressed or happy? Pet experts explain how you can tell.
By Tara Yarlagadda
Science
8.9.2022 12:30 PM
You need to see Saturn at its closest and brightest this week
By Joseph Malcomson
Share: