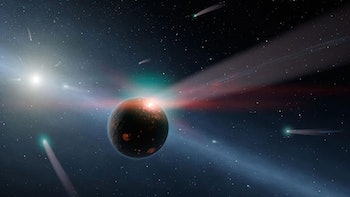 The eight planets of our Solar System aren’t the only ones we’ve ever had — they’re merely the survivors.

But that doesn’t mean the other planets were destroyed. Earth may have a long-lost sibling somewhere in interstellar space. At least one rocky planet, around the same mass as Mars, may have been booted out of the early Solar System.

These are just some of the findings compiled in a recent review paper in the Annual Review of Astronomy and Astrophysics, taking a look at the mysterious third zone of our Solar System, those points past Neptune and out into interstellar space.

Today, the planets in our Solar System are neatly sorted by size and composition:

And that’s a little strange. As if something is missing.

“It seems unlikely that Nature created four giant planet cores, but then nothing else larger than dwarf planets in the outer Solar System,” planetary scientists Brett Gladman of the University of British Columbia and Kathryn Volk of the University of Arizona write in the review.

How did the Solar System form?

To understand how the Solar System formed and evolved, scientists use computer simulations to test whether particular conditions or events could produce a Solar System like the one we see today. And several of the models that best explain the modern Solar System start with at least one extra planet in a surprising place, according to Gladman and Volk.

Those models suggest that the outer Solar System originally contained one or more rocky planets, about the size of Mars or Earth, in addition to the gas and ice giants we know of today. Eventually, brushes with the giant planets’ gravity pushed these rocky Mars-sized planets far out into the Solar System or launched them into interstellar space.

“I agree that it is likely that a Mars class planet was there initially,” Southwest Research Institute planetary scientist David Nesvorny tells Inverse, “but the question is whether it has survived and if we have any evidence for it.”

If scientists like Max Planck Institute for Extraterrestrial Physics astrochemist Kedron Silsbee and Institute for Advanced Study astrophysicist Scott Tremaine are correct, those long-lost rocky outer planets may help explain some aspects of the Solar System as we know it. But whether or not they got flung out or are still hanging around, hidden at far distances, is unknown.

“Within the context of our model, it’s largely a matter of chance whether one still remains,” Silsbee tells Inverse.

Which planet is missing from the solar system?

Thanks to computational models, we know that the four giant planets once orbited the Sun at different distances, and maybe even in a different order, than their current orbits.

As they grew, each planet’s gravity interacted with the others, causing Jupiter to move closer to the Sun while the other three planets migrated outward. But so far, according to Gladman and Volk, no single model of the gas giants’ migration explains how all of the objects in the outer Solar System got into their current orbits.

When we talk about trans-Neptunian space, we often picture primordial chunks of rock, which formed at the far edges of the disk of gas and dust orbiting the newborn Sun and haven’t changed much in 4.6 billion years.

But some of the dwarf planets and smaller objects beyond Neptune formed closer to the warm heart of the Solar System and then got shoved into the chilly outskirts by the gas and ice giants.

Not only are these objects made of different materials than the region’s original population, but they also tend to be in more elongated, tilted orbits thanks to the gravity assists that boosted them so far out.

In particular, some trans-Neptunian objects’ orbits never come closer than 40 AU to the Sun — 1 AU is the distance between the Earth and our home star. These are generally called the “detached population,” and they include the dwarf planet Sedna. And this might be precisely where to look for our missing sibling.

“Our simulations found that in about half of the cases, all of the Mars-scale planets in the outer Solar System were ejected into interstellar space,” Tremaine tells Inverse. “But in the remaining half, one ‘rogue’ planet was left in an orbit similar to that of the detached population of Kuiper Belt objects.”

Does Planet 9 exist? Maybe not

The rogue planet scenario isn’t to be confused with Planet Nine, a much larger hypothetical planet that some planetary scientists suggest may be awaiting discovery even further out in trans-Neptunian space.

Think of Planet Nine and the Mars-sized rogue planet as alternative hypotheses. It’s a contentious debate that will likely only be settled if someone actually discovers a new planet.

“Modeling can certainly provide evidence for the existence of this type of planet, but in the end, the only persuasive evidence is to find it,” Tremaine says.

The Vera Rubin Observatory, when it begins surveying the sky in late 2023, may be able to spot a planet lurking at the edges of our Solar System — if the world happens to show up in the right section of the sky. Evidence may also turn up in data from the European Space Agency’s Gaia star-mapping mission, according to Tremaine, if the unseen planet’s gravity bends the light from stars in the background.

Of course, it’s also possible that there’s no planet waiting out there at all. The gravitational nudge that lifted the so-called detached objects into their current orbits could have come from a large group of smaller objects, since scattered by the gas giants. It could also have been the result of a close brush with another Solar System in the crowded cluster of stars that produced our Sun.

And there’s always the haunting possibility that if a medium-sized rocky planet did once inhabit the outer Solar System, it’s now a rogue planet wandering alone in the dark. If that’s the case, we might never actually know.

Editor’s note: A previous version of this post referred to Scott Tremaine’s affiliation as Princeton University. He is at the Institute for Advanced Study in Princeton, New Jersey, which is not affiliated with the university.

Abstract — We provide a nonspecialist overview of the current state of understanding of the structure and origin of our Solar System's transneptunian region (often called the Kuiper Belt), highlighting perspectives on planetesimal formation, planet migration, and the contextual relationship with protoplanetary disks. We review the dynamical features of the transneptunian populations and their associated differences in physical properties. We describe aspects of our knowledge that have advanced in the past two decades and then move on to current issues of research interest (which thus still have unclear resolution).