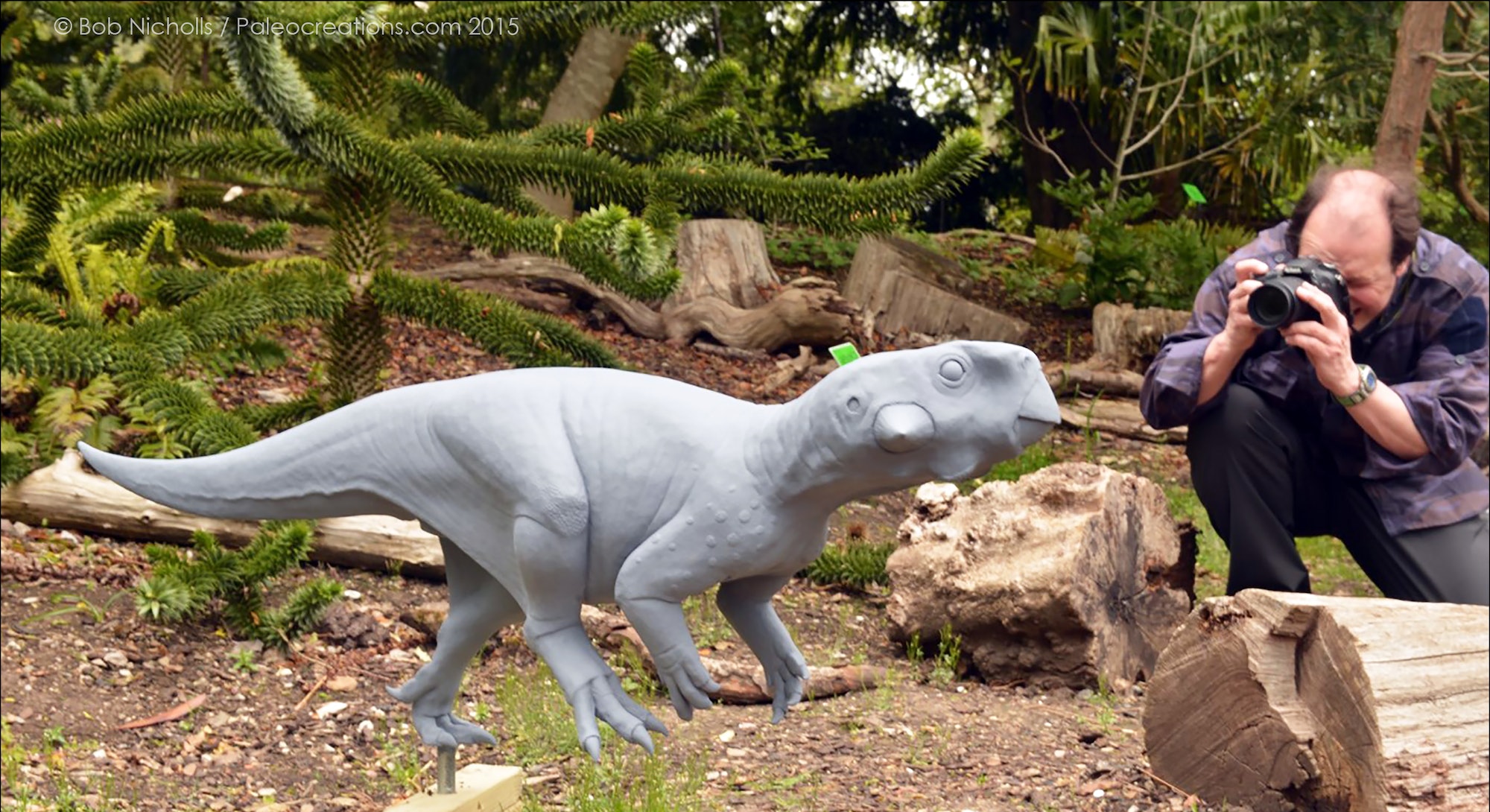 Robert Nicholls, a paleoartist from Bristol, England, was in the process of creating the world’s most realistic model dinosaur when he realized it was absolutely adorable.

It was, in fact, perhaps too adorable. The creature had been dead for over 100 million years, killed by some gruesome cause lost to time. Cute wasn’t exactly the vibe he was going for.

Working alongside Jakob Vinther, a paleontologist at the University of Bristol, Nicholls had spent months rebuilding an exact replica of a Psittacosaurus — a plant-eating, beaked dinosaur about the size of a labrador.

Nicholls had constructed the dinosaur “from the inside out,” as he tells Inverse, but there were no signs of impending cuteness until he readied the dinosaur’s cheeks. (He and Vinther knew the dinosaur had cheeks due to pigmented skin in that region on the fossil the model is based on.) As he applied his clay, the dinosaur started to look suspiciously chubby.

“There was debate about whether we should keep it looking cute,” Nicholls says.

“I was like, there are cute animals in the world. We shouldn't pander to the idea that historic animals or dinosaurs are all monsters. They weren't. They were complex.”

The finished 3D model of this Psittacosaurus isn’t adorable because the team was tickled by the idea of a cute dinosaur. It’s cute because of the facts. The model was created using a unique blend of artistic and scientific expertise that took an extremely well-preserved fossil and rendered it in three dimensions. Vinther provided the science, and Nicholls adapted those findings using an artist’s eye.

The result was something neither could have predicted: a chubby-cheeked, wide-eyed dinosaur that, even today, is probably the most accurate rendering of a dinosaur in the world. For short, they call him Pudgy.

“If the reconstruction looks unusual, or how we didn't expect it to look, that's probably a good thing,” Nicholls says, reflecting on the project. “That’s because it means we're not following preconceived ideas.”

This model Psittacosaurus has since taught scientists about how this dinosaur lived and how it communicated. It has also set a new precedent for accuracy in paleoart, allowing scientists like Vinther to study a long-dead animal the same way they might study a living one.

“We all were really just astounded by how lifelike it was,” Vinther tells Inverse.

The dream — Decades ago in China, scientists unearthed a pristine Psittacosaurus fossil from a fossil goldmine called a Lagerstätte, a sedimentary deposit where soft tissues like skin or feathers have been found preserved along with animal bones. The recovered Psittacosaurus, called SMF R 4970, likely sank to the bottom of a freshwater lake during the Cretaceous period. That lake safeguarded the dinosaur’s soft parts.

Those included tail spines that look like porcupine quills, and, critically, melanosomes — tiny sacs containing pigments that reveal what color the dinosaur actually was.

It was a rare and special find. In 2001, Frankfurt’s Senckenberg Museum purchased the fossil for $200,000 dollars, but not before it had traveled the world under suspicious circumstances.

As Nature reported, some paleontologists believe it had been smuggled out of China and passed from museum to collector on the black market for decades. The scientific accuracy of the fossil isn’t questioned, but because of its dubious handling, the paleontology curator at New York’s Museum of Natural History told Nature the museum wouldn’t let it through the door.

The Senckenberg Museum, however, bought and displayed the fossil anyway, and soon began fielding requests from researchers interested in examining it. (Even in 2019, National Geographic included it in a list of the world’s “most spectacular dinosaur fossils.”) And in 2014, when Vinther, the paleontologist, was first considering his own project examining dinosaur color patterns, SMF R 4970 was a natural starting point.

Vinther’s dream was to recreate a Psittacosaurus based on the scientific evidence contained in this fossil. He would use that model to:

At his university, colleagues were studying the efficacy of animal camouflage by placing mealworms on colored plates in the forest and observing who got eaten, or determining why deer can hide so well in forests by creating 3D model animals.

“It’s something you could actually imagine having lived.”

“People have realized that instead of, like, making up ‘just so stories’ why an animal looks a certain way, we need to try and demonstrate it,” Vinther explains.

People who study dead animals don’t often get to see the way the sun reflects off of their skin or how color patterns might help camouflage a creature in forest light, so they’re often limited to making informed guesses. A life-size 3D model based on the Senckenberg Museum’s fossil would give Vinther something concrete to work with. But the skills needed to create model dinosaurs aren’t part of most Ph.D. programs.

“We really needed somebody who has that ability to take the information and bring it into life,” Vinter says. “That is something that us paleontologists often struggle with.”

The team — Robert Nicholls was the perfect person for the job.

Nicholls has drawn dinosaurs for as long as he could hold a pencil, he tells Inverse. Since those early days, he’s become an established freelance paleoartist. Vinther had seen his work before — and it stood out.

Vinther was especially struck by Nicholls’ rendering of an Ichthyosaur, a marine reptile that resembles a dolphin. The Ichthyosaur was swimming through a school of fish, poking its nose through the school in search of prey. It wasn’t a posed, stiff-looking dinosaur you might see in a museum or a man-eating monster from Jurassic Park. It looked like an animal that might have actually lived.

“I really feel like he has tried to take the accuracy that we can glean from science,” Vinther says. “But then he tries to make it dynamic and realistic.”

Nicholls’ approach is a blend of artistic talent and scientific drive. He’s just as excited by dinosaur science as he is by drawing cool-looking animals, and it shows in his work.

In a detailed explanation sent to Inverse about Pudgy’s construction, Nicholls spends paragraphs describing how he settled on the dinosaur’s reddish-brown scales. It’s because the melanosomes (the pigment-containing sacs) contained in the fossil were preserved in ovular structures called microbodies. The fact that these were oval-shaped, he explains, suggests they contained phaeomelanin, which gives rise to a reddish-brown color.

Based on that evidence, Nicholls created a reddish-brown dinosaur with a spattering of black scales. Some scales had to be individually painted, and simply perfecting the dinosaur’s coloring took him two weeks.

Because of his work, Nicholls is credited as an author on Vinther’s scientific paper about the color patterns of Psittacosaurus, even though he’s not a scientist. The front cover of that paper hangs on Nicholls’ wall at home.

“I'm not a trained scientist, so to have my name on the paper as well was really special,” he says.

How they stayed connected — Both Vinther and Nicholls both live in Bristol, England, so collaborating was as simple as walking into Nicholls’ workshop or Vinther’s office at the University of Bristol. The harder task was pulling information out of a fossil that was housed in a museum in Germany without bringing it across borders.

Vinther sent Nicholls to Frankfurt to study the fossil with an artist’s eye. Nicholls spent three days photographing the dinosaur in direct light to capture its anatomy as well as passing light through filters to illuminate the melanosomes. He took hundreds of photographs and hundreds of measurements in person, and then started building the dinosaur “from the inside out.”

During the process, Vinther and Nicholls would meet in person. They met in Nicholls’ garden and discussed the dinosaur’s coloring, the size of his cheeks, or, on one occasion, his unexpected cuteness as the piece came together.

“It was a constant backward and forward conversation, really,” Nicholls says.

What shorthand they used — During long conversations over the models’ evolving skeleton, the dinosaur began to take on a personality. His cheeks were round, his eyes wide, and his head flat. It was Vinther who finally came up with the nickname that really stuck: “Pudgy.”

“Generally, we were just, like, so flabbergasted by the fact that it looks so cute,” says Vinther.

“It was a cute little herbivore that tried to blend in with its environment. They weren’t freaky beasts and wild experimentations that you couldn't draw comparisons of today.”

So, did they achieve it — When pudgy was finished, Vinther and Nicholls found that, consistent with the fossil evidence, Pudgy’s scales created a pattern called countershading. This means dark scales on top and a reddish-brown colored belly.

The dinosaur’s color patterns slowly transition from dark to light about halfway down his body — a pattern often found in animals that live in places like forests rather than open plains exposed to direct sunlight.

This suspicion that Psittacosaurus lived in forests rather than open areas was confirmed when Vinther and Nicholls took a “blank,” or gray-colored, copy of Pudgy on a field trip to the botanical gardens and photographed him. Under diffuse light, the type that might fall through forest trees, the shadows cast on Pudgy matched the color pattern Nicholls and Vinter had reconstructed. These findings were published in a 2016 paper.

From a scientific perspective, “we could actually play with it really and learn something from it,” Nicholls says. But from an artistic one, the model sent another message.

Nicholls explains that he wasn’t out to create any Psittacosaur. He was interested in creating one specific Psittacosaurus — the exact one that may have drunk from that freshwater lake that once encased its bones or lived in the forests that once surrounded it.

By collaborating with Vinther, he showed that not just paleoart but paleo portraiture is also possible. It’s the difference between looking at a picture of a human in an anatomy book and looking into the eyes of some long-dead individual who actually lived.

“It’s something you could actually imagine having lived,” Vinther says.

What’s next? — Today, there are two “Pudgys” on display. One is currently at the royal mint in the United Kingdom. But the other is at Nicholls’ home, where he may soon get an upgrade. Nicholls has plans to resculpt Pudgy’s rear-end to better reflect Vinther’s most recent research, suggesting it may have been used to send social signals.

If Pudgy is to retain his crown as the most accurate dinosaur model on earth today, he may never actually be completed. So long as the science progresses, so will Pudgy.

“Will we do more research on that dinosaur?” Nicholls says. “Probably. There's still so much more information in the fossil.”

DREAM TEAMS IS A SERIES FROM INVERSE that takes a look back at the greatest team efforts of the 21st century and what they mean for our ability to collaborate in the future.