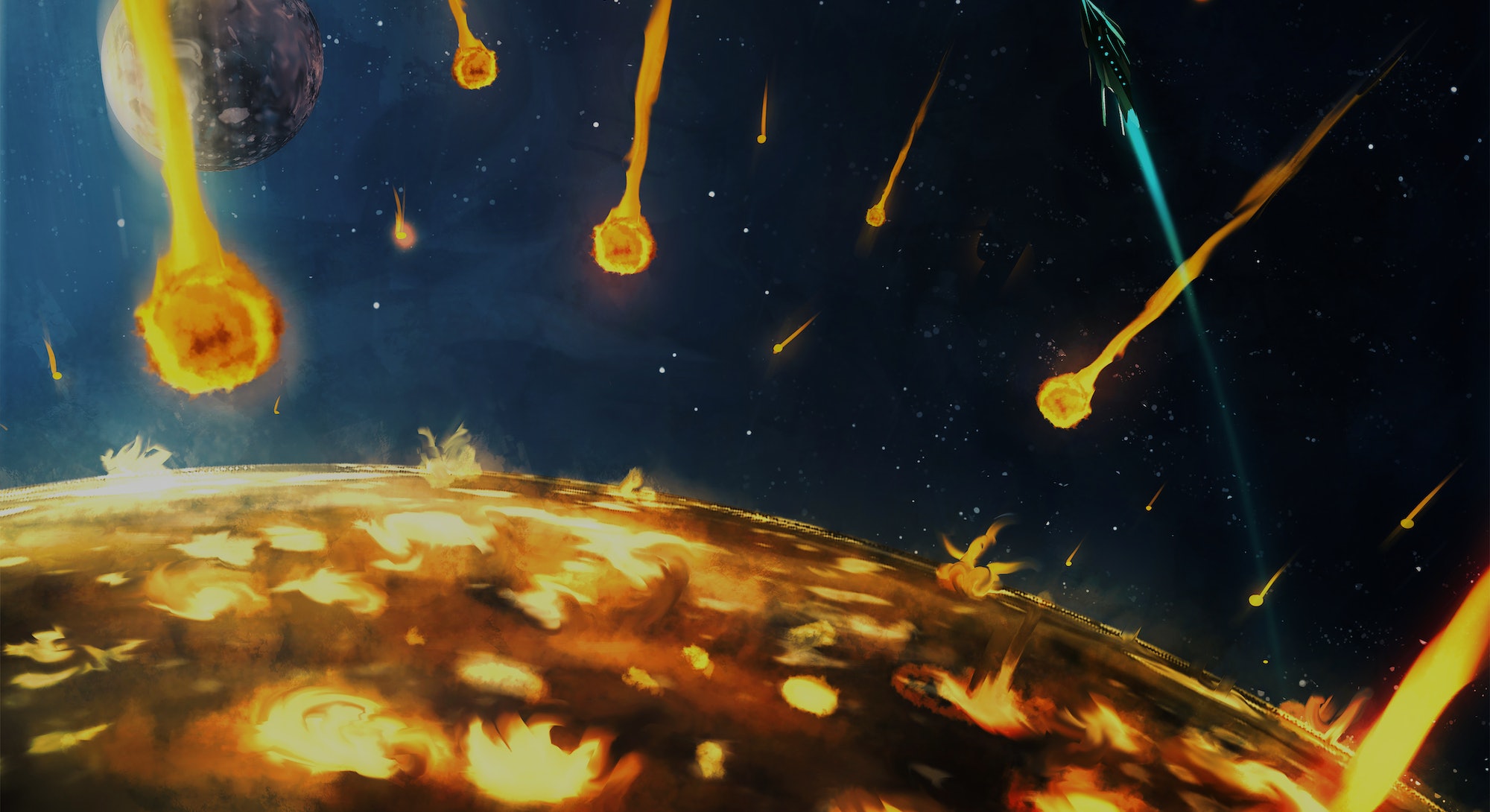 “Is this real? Is this a goddamn joke?”

These frantic words, uttered by Randall Mindy (Leonardo DiCaprio) in one of the first scenes in Netflix’s upcoming sci-fi comedy, Don’t Look Up, convey the urgency of the situation facing him and Ph.D. candidate, Kate Dibiasky (Jennifer Lawrence).

Kate has discovered a comet, and, according to the scientists’ calculations, that comet will hit Earth in six months. Humanity will be wiped out, along with most other species.

“We have precisely six months, ten days, two hours, 11 minutes, and 41 seconds until a comet twice the size of Chicxulub tears through our atmosphere and wipes out all life on Earth,” Kate says.

So, yes, it is real, and no, it isn’t a goddamn joke. Director Adam McKay’s latest movie reveals a contentious debate that rears its head every time Hollywood inevitably features this familiar plot point: could a planet-killing comet actually hit Earth and wipe us out?

But Don’t Look Up’s outlandish sci-fi plot is also a clever foil for an even more controversial scientific debate: can scientists ever accurately communicate serious threats?

McKay intended the movie to serve as a metaphor for climate change, but during the Covid-19 pandemic, Don’t Look Up also highlights difficulties facing public health officials who communicate changing information to a skeptical public, misled by the politicization of science and media echo chambers.

The movie’s clever use of parody, combined with actual science, effectively highlights three questions facing scientists in the movie — and in real life.

To answer these questions, Inverse speaks with Amy Mainzer, principal investigator of NASA's Near-Earth Object Wide-field Infrared Survey Explorer (NEOWISE) mission and a leading scientist in asteroid detection and planetary defense. Mainzer served as an advisor on the movie.

“The movie really is about the struggle of scientists to tell what we're learning about the way the world works,” Mainzer tells Inverse.

Mild spoilers ahead for Don’t Look Up.

Could a planet-killer comet hit Earth?

“Are we really about to tell the President of the United States that we have six months until humankind, basically every species, is completely extinct?” Kate tensely asks Randall.

The two scientists have been summoned to debrief the president on the comet’s dire threat, along with Dr. Oglethorpe, head of NASA’s Planetary Defense Coordination Office — a real department, as the movie points out.

Oglethorpe puts it bluntly: “Madam President, this comet is what we call a planet killer.”

But is this planet-killer comet plot scientifically plausible, or is it just a tired Hollywood trope? Mainzer, who designed the fictional Comet Dibiasky, explains.

“So I actually designed the comet for this movie, and it's based on a number of other comets that have similar orbital characteristics and come from the extreme outer part of our solar system,” Mainzer says.

According to Mainzer, this kind of comet is known as a long-period comet, which is often found “just a few months before they make their closest approach to the sun,” Mainzer says.

“My team discovered comet NEOWISE last year, and that object has a fairly similar orbit to the type of thing that we're talking about in the movie.”

Mainzer’s team discovered comet NEOWISE at the end of March 2020, and by early July, it had already made its closest approach to the Sun.

So the idea of a fast-moving, massive comet that comes close to Earth — perhaps too close for scientists’ comfort — is entirely plausible.

“These things can move really fast relative to the Earth,” Mainzer says. “They can move with incredible speeds and they can be very large.”

But the chance of a planet-killing comet actually striking Earth is a little less realistic.

“That said, as big as these objects are, space is incredibly huge,” Mainzer says.

According to Mainzer, it’s “very unlikely that a comet like this and the Earth would ever be at the same place at the same time.”

While Mainzer says a planet-killing comet striking Earth is “very unlikely to happen in real life,” the chance isn’t zero. Projects like Mainzer’s NEOWISE mission keep an eye out for these near-Earth objects.

“We obviously care about objects that are big enough to cause global events, even though they're extremely rare, but we also are looking out for things that can that are smaller, but that could still cause significant damage on the ground,” Mainzer says.

Could we stop a comet or asteroid from hitting Earth?

After the president realizes that saving the planet could boost her chances of winning the midterm elections, she mobilizes a mission to launch a pre-emptive strike against the asteroid using decommissioned space shuttles and satellites loaded with nuclear explosives.

“We will blow Comet Dibiasky off her course,” the fictional president says confidently.

But is this really what scientists would do in real life? It depends on the circumstances.

“If the object is really, really large, and it's found without a lot of warning, you would throw everything you've got at it, in my opinion,” Mainzer says.

“We really would rather have a lot more time so that we can develop other techniques that are less extreme and possibly more effective,” Mainzer says.

If you detect these space objects when they’re years or even decades away from Earth, you can try alternative methods like hitting an asteroid with a spacecraft and nudging its orbital trajectory away from Earth — an idea known as “kinetic impact.”

But the movie detects the comet six months out, which may be too late to change its trajectory if it were a real-life object.

“It will be really, really difficult in real life, because, especially for an object that's very massive, it just takes a huge amount of energy to push it out of the way,” Mainzer says.

NASA’s Double Asteroid Redirection Test (DART) mission, which launched in fall 2021, will attempt to test out what kinetic impact might look like in real life by launching a spacecraft to slightly redirect the asteroid Dimorphos’ orbit — a pre-test for a real-life asteroid threat down the line.

“We have the tools to prevent the worst possible outcomes, but we have to make the decisions based on the best scientific evidence,” Mainzer says. “There’s no substitute for doing that.”

How can scientists convey serious threats to the public?

In Don’t Look Up, the urgent threat dooming humanity is a comet, but Comet Dibiasky is really a stand-in for any scientific topic that’s dire, packed with uncertainty, and difficult to communicate, whether that’s the climate crisis or the Covid-19 pandemic.

“Uncertainty is a word that has a very specific definition mathematically in science and we use it to quantify exactly how well we made a particular measurement,” Mainzer explains.

She adds, “But if I say that something is uncertain, usually that's interpreted as meaning ‘I don't know,” in the eyes of the public, which can inadvertently lessen scientific credibility.

Case in point: The president in Don’t Look Up fixates on Randall’s assertion that there’s a 99.78 percent chance the planet-killer comet will strike Earth. This idea catches fire in the media, which uses the notion that the science isn’t 100 percent certain as a reason to dismiss Randall and Kate as crackpot doomsday prophesizes.

“Who told you the science was not 100 percent?” Mindy asks, aghast, when a reporter tries to dismiss his claims that a massive comet will absolutely hit the planet.

“This scene was a really important one to me because we were really trying to convey the notion that science deals in probabilities,” Mainzer says.

In speaking with McKay, Mainzer says he was “very keen to make a movie that was centered in good science and trying to portray scientists as human beings.”

It’s easy to draw parallels between Randall and Kate and real-life scientists who are ignored or demonized by the media, politicians, and society for simply conveying the scientific truth.

Fed up with the public’s apathy, Kate explodes on national television: “Maybe you should stay up all night, every night crying when we’re 100 percent sure we’ll all going to fucking die.”

Are these the words of a fictional astronomer warning the public about an incoming scientist or a real-life climate scientist sounding the alarm on the ongoing threat of global warming? It’s hard to tell.

As a scientist, Mainzer sympathizes with Randall and Kate’s communication challenges. But ultimately, Mainzer says the film has a “hopeful core” and its takeaway is more optimistic than bleak.

“If we get to know scientists as people, we can make science-based decisions to avoid the worst outcomes for a whole host of subjects, whether it’s climate change or the pandemic or other natural disasters,” Mainzer says.

Don’t Look Up is in theaters now and on Netflix starting December 24.