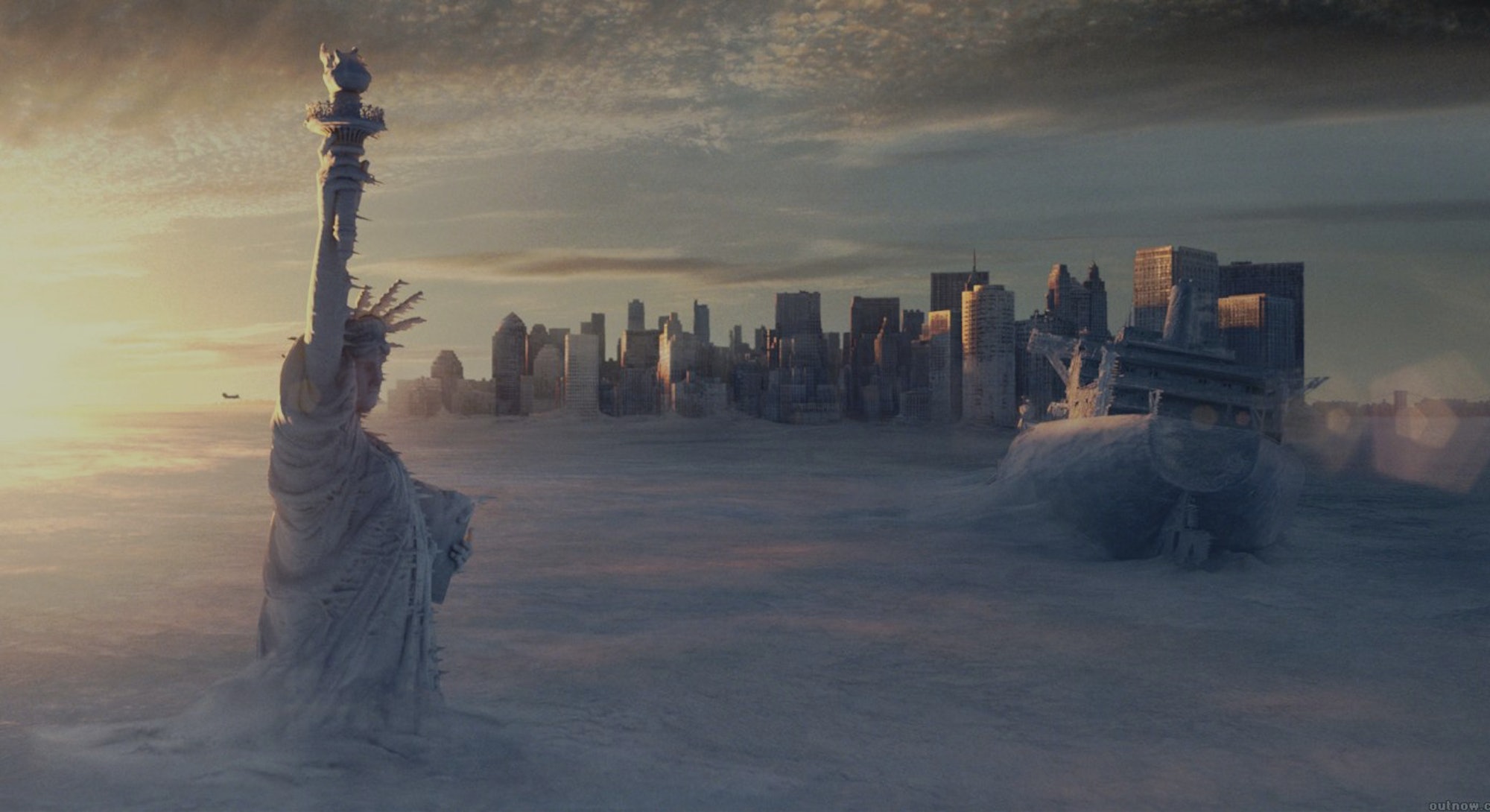 Every good sci-fi disaster movie has a predictable formula.

A scientist raises the alarm about an urgent threat to humanity, politicians ignore them, but once it becomes clear that the threat is real and could wipe out humans, they work together to solve it all.

This formula didn’t just miraculously appear. The movie that cemented it as the way to make a disaster film is arguably the 2004 sci-fi epic The Day After Tomorrow, directed by Roland Emmerich. In the film, paleoclimatologist Jack Hall (Dennis Quaid) worries that global warming could trigger a key ocean current to shutdown, dooming humans to a new Ice Age — and New York to apocalyptic storm surges.

In many ways, The Day After Tomorrow is more timely now than when it premiered in 2004. 17 years later, the climate crisis causes more extreme weather events and threatens billions of people, prompting urgent calls for action from politicians and scientists alike. Was Jack Hall right?

Most scientists agree the overnight doomsday scenario in The Day After Tomorrow isn’t exactly realistic. But they also suggest there is more science than fiction in the basic tenets of the movie’s plot — even if the finer details stretch scientific plausibility to its limits.

“There are very [few] scientifically correct facts in this movie, but this is an entertaining movie,” Dmitry Dukhovskoy, an associate research scientist at the Center for Ocean Atmospheric Prediction Studies at Florida State University, tells Inverse.

At the beginning of The Day After Tomorrow, Jack analyzes ice core samples taken from Antarctica to find “evidence of a cataclysmic climate shift which occurred 10,000 years ago,” leading to runaway global warming.

Analyzing ice cores to deduct clues about ancient climate change is actually fairly realistic, according to Cyrus Karas, an assistant professor at the University of Santiago, Chile whose work focuses on climatic changes over the past million years.

“Scientists can reconstruct global atmospheric [carbon dioxide] concentrations of the past by studying ice cores from Antarctica or other places in the world like Greenland,” Karas tells Inverse.

“Yes, there are abrupt climate shifts recorded in the Greenland ice cores — in which average atmospheric temperatures shift by 5C over a decade — that have been attributed to past Gulf Stream slowdowns,” William Colgan, Senior Researcher, Geological Survey of Denmark and Greenland, tells Inverse.

“People very much should be worried about the effects of climate change...”

But when Jack uses those findings to argue that global warming could trigger a new Ice Age in the modern-day via a shutdown of certain ocean currents, known as the Atlantic Meridional Overturning Circulation, the science gets a little murkier.

“The process of surface water cooling and sinking sets up a circulation where warm water is drawn northwards into the North Atlantic to replace the sinking water that flows southwards. We call that the Meridional Overturning Circulation,” Penny Holliday, associate group head of ocean climate at the National Oceanography Center in the United Kingdom, tells Inverse.

The world’s ocean currents effectively act as a conveyor belt, bringing warm water north to cooler parts of the globe as cooler water sinks and moves south — a pathway known as the Gulf Stream. The Meridional Overturning Circulation helps drive the Gulf Stream.

Colgan adds, “the Gulf Stream is important, because it transports heat from the equator towards the north pole, to "balance out" temperatures in the North Atlantic.”

“... but they don’t need to worry that an Ice Age will be triggered overnight.”

Jack paradoxically suggests that global warming will melt polar ice caps and effectively shut down the warmer Atlantic ocean currents, triggering a “cooling period’ (aka, a new Ice Age). The cooling period starts as a massive hurricane-like storm surge forms over parts of Europe, where temperatures rapidly drop and people freeze to death in their cars.

“It is hypothesized that if the Meridional Overturning Circulation slows down or stops, subpolar regions will become colder (like during an Ice Age),” Dukhovskoy says.

But is this apocalyptic outcome actually possible in real life? Maybe not the rapid nature of climate change, but the broad strokes are fairly accurate, according to scientists.

“There is evidence that large amounts of freshwater entering the northern North Atlantic could cause major changes in ocean currents,” Holiday says.

In the movie, Jack proposes that global warming will shut down the Meridional Overturning Circulation, causing overnight climate change.

Dukhovskoy says this is unlikely, as “these [climate] changes occur over a long time scales longer than a human life.”

Holliday agrees that “such a shut-down would not happen overnight in the way it happens in The Day After Tomorrow.”

She adds, “People very much should be worried about the effects of climate change that we are seeing already, and which are on track to get much worse than they are now, but they don't need to worry that an Ice Age will be triggered overnight like in the movie.”

In The Day After Tomorrow, storm surges are appearing along the Eastern seaboard as a result of the shutdown of the ocean circulation system, causing storm surge that engulf the Statue of Liberty — and all of Manhattan.

“It’s a mob scene here in Grand Central Station. Over half the platforms are flooded, and service has been suspended on all trains,” a TV broadcast in the film goes. People crowd the flooded streets of New York, where taxis float uselessly past pedestrians.

It’s a scenario that sounds bone-chillingly familiar to residents of New York, where the recent remnants of Hurricane Ida caused flash floods, a temporary shutdown of the subway system, and at least 43 deaths in the northeastern US.

Even a slowdown of the ocean circulation system would have devastating effects.

But is the exact way the storm surge played out in the movie plausible? Yes and no, according to scientists, who state that changes in ocean circulation can affect sea level.

“We know from sea level records along the eastern seaboard of the US that changes in the strength of the Meridional Overturning Circulation affect sea level already,” Holliday says.

She adds, “A collapse of the circulation could cause the sea level to rise” tens of centimeters “all along the western margin of the North Atlantic.” Such a sea-level rise would almost certainly trigger considerable flooding to coastal cities along the Eastern seaboard like New York.

But Holliday says even a slowdown of the ocean circulation system — a likelier prospect as opposed to a complete shutdown— would have devastating effects on sea-level rise and storm surges.

“Even a slow-down will increase sea level, adding to the sea level rise already underway because carbon emissions are causing the ocean to warm and expand and ice sheets and glaciers to melt,” Holliday says.

Recent deadlines practically seem to confirm Jack’s predictions from The Day After Tomorrow.

The movie’s general idea — that global warming can alter the circulation of ocean currents — is correct.

“Similar to [the movie], we are now seeing some slowdown of the Gulf Stream due to climate change,” Colgan says. “Simply put, in our current climate shift, if the Gulf Stream flickers out, the equator will heat more than the Arctic cools,” they add.

“People can expect coastal flooding to be a major hazard in their lifetimes.”

But instead of abruptly shutting down the ocean circulation system, global warming is probably causing it to gradually slow down over time – which is still a big problem for humans.

“We have high confidence that there will be a slowdown of the Meridional Overturning Circulation because of greenhouse gas emissions — and that does have major implications for humans — but not a shut-down,” Holliday says.

So, we probably don’t need to worry about the coming of the next Ice Age anytime soon.

But if you take away only one thing from The Day After Tomorrow, let it be this: the climate crisis is affecting ocean currents, causing sea levels to rise, and increasing storm surges.

“With the further effects of an increasing number of storm events, people can expect coastal flooding to be a major hazard in their lifetimes unless ambitious adaptations are put in place.”

The Day After Tomorrow is streaming now on HBO Max.