“No bunker in Greenland is going to save you.” 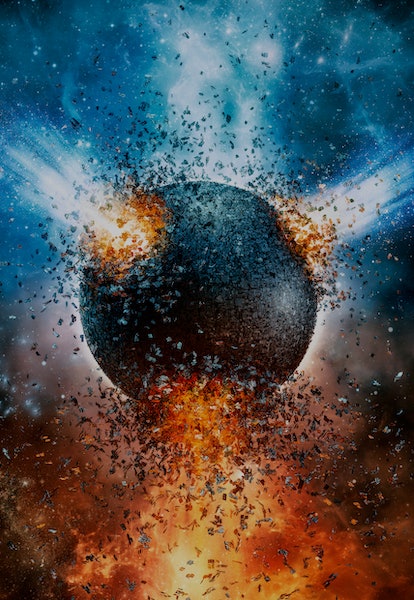 Sometimes, you see a movie trailer so ludicrous, you’re not sure if there’s even a single grain of truth behind it.

It’s easy to feel that way while watching the trailer for the upcoming Moonfall, which is the latest brainchild of director Roland Emmerich — the same director who brought you the equally apocalyptic 2004 movie The Day After Tomorrow and made history with Independence Day in 1996.

Emmerich is no stranger to outlandish sci-fi plots, but Moonfall seems to stretch plausible reality even further than normal for the 2012 director.

It’s hard to make out what’s happening in between the trailer’s over-the-top special effects and fight sequences, but one thing is clear: the Moon has somehow left its orbit and is on a catastrophic collision course with Earth.

The trailer begs one immediate question: Could the moon really get knocked off its orbit and kill humanity? The answer is somehow both less and more complicated than you might think.

Short answer? It’s very unlikely, but if it does happen, “No bunker in Greenland is going to save you,” Paul Byrne tells Inverse

Inverse chatted with Byrne, an associate professor of planetary sciences at Washington University in St. Louis, to explain the wacky, far-fetched science behind Moonfall’s premise.

How does the Moon remain in orbit around Earth?

In order for the scenario in the Moonfall trailer to occur — a collision with Earth — the Moon would somehow have to leave its current orbit. But before we can answer how that would happen, we have to understand how the Moon actually orbits the Earth in the first place.

“The Moon is in orbit in the first place because it's moving fast enough that it doesn't collide on the ground with Earth but not so fast that it's able to break the gravitational effect of Earth,” Byrne says.

“Orbit is a function of speed, not altitude.”

(The Moon’s orbit is also vital to the movement of tides on Earth. That’s probably why we see raging sea waves in the Moonfall trailer, as the Moon’s fast approach has altered the ocean’s tides.)

Speed, not distance or altitude, is the most crucial factor in maintaining the Moon’s 27-day orbit around the Earth.

“Orbit is a function of speed, not altitude,” Byrne says.

The fact that the moon’s speed in orbit is what matters most can help us understand how the Moon could unnaturally leave its orbit, causing a collision with Earth, but first...

Could the Moon naturally collide with Earth?

Moonfall’s synopsis reads: “A mysterious force knocks the Moon from its orbit around Earth and sends it hurtling on a collision course with life as we know it."

This idea is actually the most plausible part of the movie trailer, but just because something is technically possible, doesn’t mean it could actually happen.

“One option would be to hit the Moon and you could basically alter the trajectory of the moon such that it intersects” with Earth, says Byne.

It’s possible some large object like an asteroid could hit the Moon with such force that it knocks it out of its orbit. Such planetary collisions were more common in the early days of our solar system. In fact, scientists think that a massive planetary object, known as Theia, collided with the Earth 4 billion years ago, resulting in the formation of the Moon.

But for an object to knock the Moon off its orbit, it would have to be “big enough to hit the Moon at the right speed at the right angle,” says Byrne.

“I suppose it's within the realms of possibility,” he adds, “but it's exceptionally unlikely.”

Much smaller objects collide with the Moon all the time — just not any that are significant enough to affect its orbital trajectory.

If anything, Byrne says, the Moon is slowly moving away from the Earth by several centimeters each year — or roughly the rate at which our fingernails grow.

So the Moon’s orbit is getting further away from Earth, not closer, and certainly not on a collision course with our planet.

“Eventually, the Moon will [...] break away from Earth's gravitational effect and it will just go to orbit the Sun,” Byrne says. (Don’t worry, this will occur far off in the galaxy’s future — not within our lifetime.)

Would we survive if the Moon collided with Earth?

In Moonfall’s trailer, bits and pieces of Moon debris appear to rain down as humanity battles numerous natural disasters and what appear to be some kind of paranormal figures. But in the event of an actual collision, humans likely wouldn’t have a fighting chance.

“The moon hitting Earth would probably shatter the planet, like, turn it into a magma ocean, a giant glowing vapor cloud,” Byrne says. It would be like “resetting the planet’s history.”

Could humans change the Moon’s orbit so it hits the Earth?

It’s not out of the question that aliens with superior technology — and a fervent desire to wipe out humanity — could knock the Moon out of its orbit and hit the Earth.

The trailer appears to feature monsters and some type of dark, paranormal force, so it’s possible Moonfall will take this approach, too

“If you were an alien race and you really didn’t like Earth” then one way to kill off humanity would be to put “an engine on the moon and slow it down,” Byrne says.

To artificially alter the Moon’s orbit so it crashes into Earth, you would have to slow the Moon’s momentum and decrease its altitude using some type of engine placed on the side of the Moon “that faces forward — that basically moves forward along its orbit” according to Byrne. In effect, you’d be using propulsive forces to slow the Moon down rather than pushing it into us, as Moonfall suggests.

“If you somehow had the ability to put engines on the moon, and have the ability to overcome the momentum of the moon,” you could theoretically change its speed — and its orbit, Byrne says.

He adds, “If you slow [the Moon] down, it will basically spiral in, and it will be kind of you watching it going ever closer until, eventually, you get this glancing blow between” the Moon and Earth.”

“Humans have no means of doing this anytime soon.”

But humans lack any sort of technology approaching that. Earlier this year, Republican congressman Louis Gohmert faced serious ridicule when he suggested that humans should alter the moon’s orbit as a solution to the climate crisis.

Inverse reported on this story, but to put it simply: We lack the technology to do anything about the Moon’s orbit.

“We can barely manage to agree that climate change is a problem,” Byrne says. “So, no, humans have no means of doing this anytime soon.”

Despite the movie’s far-fetched premise, will Byrne still check out Moonfall when it appears on the big screen? Absolutely.

“I'm a massive fan of stupid science fiction with big special effects,” Byne says, adding, “But I learned a very long time ago, turn off the part of my brain that actually knows about this stuff.”

Moonfall crashes into theaters on February 4, 2022.

Correction: This article has been updated to reflect the correct hypothetical placement of engines on the Moon in order to alter its orbit.