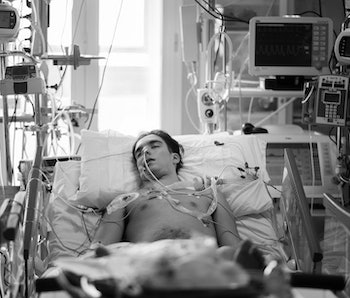 When it comes to surviving critical cases of Covid-19, it appears that men draw the short straw.

Initial reports from China revealed the early evidence of increased male mortality associated with Covid. According to the Global Health 50/50 research initiative, nearly every country is now reporting significantly higher Covid-19-related mortality rates in males than in females as of June 4. Yet, current data suggest similar infection rates for men and women. In other words, while men and women are being infected with Covid-19 at similar rates, a significantly higher proportion of men succumb to the disease than women, across groups of similar age. Why is it then that more men are dying from Covid-19? Or rather, should we be asking why are more women surviving?

I am an immunologist, and I explore how stress and biological sex can impact a person’s vulnerability to immune-mediated disease. I study a specific immune cell called the mast cell. Mast cells play a pivotal role in our immune systems as they act as first responders to pathogens and orchestrate immune responses that help clear the invading pathogens.

Our research shows that mast cells from females are able to initiate a more active immune response, which may help females fight off infectious diseases better than men. But the trade-off may be that women are at higher risk for allergic and inflammatory diseases. Recent evidence indicates that mast cells are activated by SARS-CoV-2 which causes Covid-19.

Some clues to why females have higher survival rates may be found in our current understanding of differences in the immune systems of men versus women.

Could sex differences in the immune system play a role? — In general, females have a more robust immune response than men which may help females fight off infections better than males. This could be a result of genetic factors or sex hormones such as estrogen and testosterone.

Sex hormones such as estrogen and testosterone can also impact the immune response. In one study, researchers showed that activating the estrogen receptor in female mice provided them protection against SARS-CoV. And there is an approved clinical trial that will examine the effects of estrogen patches on the severity of Covid-19 symptoms.

It is, however, interesting that the current data showing that women have better survival rates than men apply to even men and women in the 80-plus age group when hormone levels in both sexes equalize. This suggests that factors other than adult sex hormone levels are contributing to sex differences in Covid-19 mortality.

Androgens, a group of hormones - including testosterone - that are best known to stimulate the development of male characteristics and can cause hair loss, have also received recent attention as a risk factor for Covid-19 in males. In a study conducted in Italy, prostate cancer diagnosis increased the risk for Covid-19. However, prostate cancer patients who were receiving androgen-deprivation therapy (ADT), a treatment that suppresses the production of androgens which fuels prostate cancer cell growth, had a significantly lower risk for SARS-CoV-2 infection. This suggests that blocking androgens in men was protective against SARS-CoV-2 infection.

It is unknown how ADT works to reduce infection rates in men and whether this has been shown in other countries has yet to be determined. Testosterone, which is an androgen hormone has immune-suppressive effects so one explanation could be that ADT might boost the immune system to combat SARS-CoV-2 infection.

There is also evidence that males and females have different quantities of certain receptors that recognize pathogens or that serve as an invasion point for viruses like SARS-CoV-2. One example is the quantity of angiotensin-converting enzyme 2 (ACE2) receptors, which SARS-CoV-2 binds to in order to infect cells. While there is currently no conclusive evidence for the role of ACE2 receptors impacting sex differences and the severity of Covid-19 disease, it remains a potential contributing factor.

Gender, sex, and Covid-19 risk — A number of factors can interact with biological sex to increase or decrease one’s susceptibility to Covid-19. Another major factor is gender, which refers to social behaviors or cultural norms that society deems appropriate. Males may be at increased risk for severe disease because in general, they tend to smoke and drink more, wash their hands less frequently, and often delay seeking medical attention. All of these gender-specific behaviors may put men at higher risk. While there is no current data yet on how gender plays a role in Covid-19, it will be a critically important factor to account for in order to understand sex differences in mortality.

While Covid-19 highlights the importance of biological sex in disease risk, sex biases in disease, in general, is not a new concept. Covid-19 is just another example of a disease that will be added to the growing list of diseases for which males or females are at increased risk.

A history of male-biased research — You might be wondering that if biological sex is so important, then why don’t we know what is causing disparities in disease prevalence between the sexes and why are there no sex-specific therapies?

One major reason is when it comes to being included in scientific research, it is mostly males who have been studied.

This disparity between biological sex differences in research has only recently been remedied. It has only been in the last five years that the National Institutes of Health has required sex difference data to be collected for all newly funded preclinical research grants.

While there may be several reasons for choosing one sex over the other in research, the huge disparity that now exists is likely a reason why we still know relatively little about sex differences in immunity, including the current Covid-19 pandemic.

This has clearly hindered the advancement of women’s health but also has negative consequences for men’s health. For example, given the biological differences between the sexes, it is very possible that drugs and therapies will have different effects on females than males.

Biological sex is clearly a major factor determining disease outcomes in Covid-19. Precisely how your biological sex makes you more or less resilient to diseases such as Covid-19 remains to be elucidated. Future basic research with animals and clinical trials in people need to consider biological sex as well as interactions with gender as an important variable.

This article was originally published on The Conversation by Adam Moeser at Michigan State University. Read the original article here.