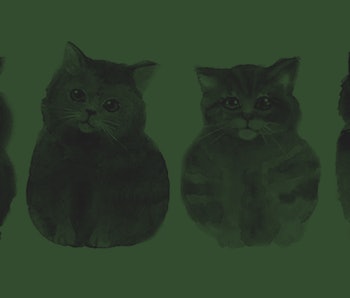 After reports of two dogs testing positive for SARS-CoV-2 in Hong Kong, the most recent news to cause alarm among animal owners is that of a cat in Belgium with apparent symptoms of the virus that causes COVID-19.

The owner of the cat had recently tested positive for the virus. It is reported that the cat developed breathing difficulties and diarrhea one week later. Vets at the University of Liège, Belgium then tested the cat for SARS-CoV-2 and subsequently detected the viral genome in vomit and a stool sample.

Should we now be concerned about the virus spreading to cats? To be succinct – not yet. Several key questions need to be answered before any conclusions can be drawn from this case.

Many people are asking if the coronavirus detected in the cat really is SARS-CoV-2 or whether it could be the completely different cat-only coronavirus, which has been infecting cats worldwide for decades. The feline coronavirus exists in two forms: one causes mild gastrointestinal disease and the other causes a highly fatal disease known as feline infectious peritonitis (FIP).

Feline coronaviruses look very different from SARS-CoV-2 at the genetic level. This means that as long as the correct test was run for the cat in question, it should be easy to differentiate between the two viruses.

The standard test for SARS-CoV-2 only detects the viral genome. It is very important to bear in mind that this test does not detect infectious or “live” virus particles, so it is impossible to tell whether the viral genome found in the cat was from a particle that could replicate. To demonstrate infectivity, many more tests are needed. It is possible that the cat ate contaminated food and the virus simply passed through its gut. This explanation is less likely if large quantities of genetic material were detected in the cat, but this data has not been released.

Whereas the two canine SARS-CoV-2 cases had no obvious clinical signs relating to COVID-9, the cat at the center of the latest media attention did have respiratory symptoms. But as every vet knows, cats can have breathing difficulties for many reasons, from feline asthma to heart disease. Similarly, there is a long list of causes of diarrhea in cats. Without knowing any clinical details of this case, we can’t tell whether COVID-19 was responsible for the disease or if this was just an upsetting coincidence.

Thankfully, there is still zero evidence of pets transmitting the virus to humans.

It is also reassuring that a large veterinary diagnostic lab recently stated they have now tested thousands of cat and dog samples for SARS-CoV-2 with no positive cases. Also, given that as of March 30 there are over 720,000 human cases worldwide, it is safe to assume that if this virus readily caused disease in pets, we would know by now.

This article was originally published on The Conversation by Sarah L Caddy at the University of Cambridge. Read the original article here.

More like this
Science
6.28.2022 10:00 AM
How are drugs absorbed in the body? The science of medicine, explained
By Tom Anchordoquy and The Conversation
Science
6.27.2022 11:00 AM
Letting your cat go outside could spread “life-threatening” parasites — new research
By Amy Wilson, Scott Wilson and The Conversation
Science
6.26.2022 11:00 PM
The powerhouse of the cell has a more complicated origin than we thought
By Viviane Callier and Knowable Magazine
Related Tags
Share: