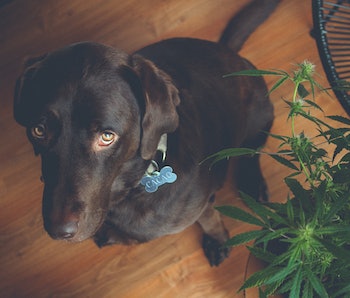 Over the past five years, cannabis legalization has skyrocketed in both Canada and many parts of the U.S. Canada legalized the drug for recreational use in 2018, and many U.S. states including Michigan and Vermont have also given the green light to the leafy green in recent years.

While humans may rejoice at the prospect of chowing down on legal edibles, their animal friends may also be scarfing down these snacks, leading to significant concerns over cannabis pet poisoning.

A study published Wednesday in the journal PLOS One reports on veterinarian accounts of cannabis toxicosis — a type of poisoning that occurs after pets consume weed — in pets in the U.S. and Canada. The findings hold serious implications for pet owners who use cannabis.

What’s new — Between January and April 2021, researchers conducted an online survey of veterinarians in the U.S. asking about the frequency and nature of any cannabis toxicosis diagnoses.

From their survey, the researchers drew three key conclusions.

First, dogs were more likely to experience cannabis toxicosis than any other pets. It’s possible, the researchers note, that dogs were simply more likely to ingest unknown food substances or veterinarians could more easily detect their symptoms compared to cats.

“That might be a reason but we can’t say for sure from our study,” Jibran Khokhar, a co-author of the study and assistant professor in biomedical sciences at the University of Guelph, tells Inverse.

Second, the rates of pet cannabis toxicosis cases in both the U.S. and Canada increased “significantly” since October 2018, when cannabis became legal in Canada, according to the study.

Third, most pets accidentally ingested cannabis — meaning their owners did not intentionally give them weed — usually in the form of edibles.

Finally, most of the cannabis toxicosis cases were benign and nearly all animals fully recovered.

Although some veterinarians reported deaths in pets exposed to cannabis, it’s hard to determine whether those were due to cannabis toxicosis, as opposed to underlying diseases or other toxins — such as chocolate or different types of drugs — in the pet’s body.

The most common symptoms of cannabis toxicosis among pets include:

Among the 251 veterinarians, a majority — 191 — practiced in Canada, but study authors say the findings are significant enough to confirm rising cannabis toxicosis rates in pets in the U.S.

How to keep your pets safe — The study’s findings also dovetail with the observations of Stephanie Liff, veterinarian expert for Lemonade, a company that provides pet health insurance.

“I’ve definitely seen a rise in cannabis toxicity among pets since the legalization as well as an increase in medicinal cannabis products,” Liff tells Inverse.

The American Society for the Prevention of Cruelty to Animals also noted a large jump in calls to their Poison Control Center starting in 2019.

Still, Liff’s observations align with the study, which shows that cannabis toxicosis isn’t likely to be fatal for most pets. A dog ingesting a pot brownie may be more likely to experience serious harm from the chocolate rather than the weed.

“While the dogs I see come in after ingesting cannabis look miserable, they do tend to recover quickly,” Liff says.

But that doesn’t mean weed-loving pet owners shouldn’t pay serious attention to potential symptoms of cannabis poisoning in their pets. Keep an eye out for warning signs like drooling, urinating, head bobbing, dizziness, wobbly and unsteady movements, as well as vomiting. If you suspect your pet has ingested cannabis, seek veterinary care immediately and carefully describe any symptoms you notice.

“To keep pets away from your cannabis stash, try and keep it in a sealed container in a drawer or out of reach,” Liff recommends, adding that a scent-proof container is best.

“This becomes especially true if you’re baking or creating any treats that tend to be even more enticing for dogs specifically.”

What’s next — The findings are just the tip of the iceberg of future research on this topic, which will likely only become a growing concern as more states in the U.S. legalize weed.

“We are taking this research forward by using this information to create a rodent model of cannabis toxicosis,” Khokhar says.

Such a model could enable scientists to better study cannabis toxicosis and develop treatments to reverse or reduce its effects.

“I think someday we might have approval for cannabis-based medications, which, in controlled doses could be beneficial,” Khokhar adds.