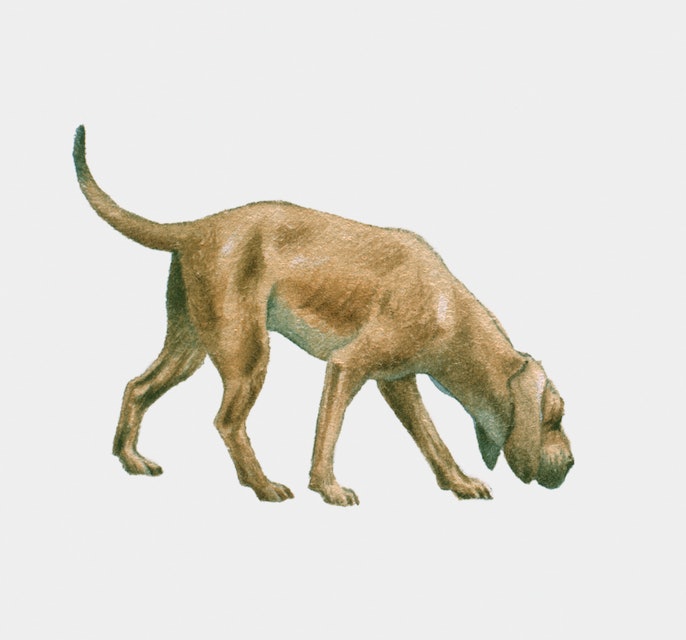 In the future, getting checked for Covid-19 might involve a visit with a dog rather than a doctor.

Canines may be able to detect the disease, reports a new study, possibly even before people start showing symptoms.

In a new proof of concept paper, French researchers present evidence for dogs being able to detect Covid-19 by sniffing sweat from humans' armpits. After a training period, eight dogs — which had previously been trained to detect explosives and colon cancer — were able to detect the disease either most or all of the time, researchers report.

This finding was published on June 5 on the preprint server bioRxiv. It has not yet been peer-reviewed.

The dogs completed 368 trials, sniffing hospital-provided sweat samples of people who either tested positive or negative for Covid-19. The main question the researchers needed the dogs to answer was whether sweat smells different in people who have the disease.

"If the answer had been no, we would have stopped — poof, finito," lead study author Dominique Grandjean tells Inverse.

But on the first day of training, it became clear within just a few hours that the dogs' expert noses picked up something different in the Covid-19 sweat samples. It was "so damn easy" to get the dogs to detect the disease, Grandjean says.

To train the dogs, the researchers placed four sweat samples, gathered on gauze cylinders swabbed on human armpits, in a line. The dogs were trained to sit after they identified a Covid-19-positive sample, as seen below.

Pre-screening for Covid-19? — Grandjean is a veterinarian and professor at the National Veterinary School of Alfort, just outside Paris, France. In addition to conducting medical research with dogs sniffing for diseases like colon cancer and Parkinson's disease, he works with firefighters to train search-and-rescue dogs.

In the new study, most of the dogs used were Belgian Malinois Shepherds, a common work dog in France. But the study authors point out that many dog breeds can develop similar skills.

It may even be the case that dogs can detect Covid-19 before humans show symptoms. Grandjean explains that one pair of cases, from a couple that provided sweat samples, puzzled him: The humans had tested negative for Covid-19, but every dog in the study flagged the sweat sample as Covid-19-positive.

Grandjean didn't know what the problem was. A week later, the chief medical officer at the hospital gave him a call: The patients were back in the hospital, with Covid-19 symptoms and a positive diagnosis.

Dog detectives — Grandjean's lab isn't the only one using dogs to detect Covid-19.

Researchers in Finland are currently looking at whether dogs can detect the novel coronavirus in humans' urine. In the United Kingdom, researchers are having dogs sniff worn masks and nylon socks. And in the United States, trials are underway to look at dogs sniffing both urine and saliva.

Grandjean chose to focus on sweat because the evidence so far suggests that sweat is unlikely to transmit Covid-19. This detail could protect both dogs and humans coming into contact with the sweat: Several cases of dogs with the disease have been reported, though all animals have been expected to recover. Researchers don't believe dog transmission is a significant risk to humans.

Sniffing pit sweat offers another benefit, too, Grandjean says: practicality. Down the road, it's possible that some kind of disease detection would be useful at public places like airports. In that case, sniffing sweat is a more viable approach than, say, detecting the disease through urine.

"Are you going to ask the people to pee when they arrive at the airport?" he asks. "I don't think it's a good option."

Sniffing sweat also helps to avoid the risk of a dog contracting the disease through human saliva, Grandjean says.

Looking ahead, Grandjean is continuing to study dog detection of Covid-19. Now that he's completed the proof of concept, he hopes the next round of study can include at least 100 dogs, to gain better numbers on how accurately dogs can sniff out the disease.

Abstract: The aim of this study is to evaluate if the sweat produced by COVID-19 persons (SARS-CoV-2 PCR positive) has a different odour for trained detection dogs than the sweat produced by non COVID-19 persons. The study was conducted on 3 sites, following the same protocol procedures, and involved a total of 18 dogs. A total of 198 armpits sweat samples were obtained from different hospitals. For each involved dog, the acquisition of the specific odour of COVID-19 sweat samples required from one to four hours, with an amount of positive samples sniffing ranging from four to ten. For this proof of concept, we kept 8 dogs of the initial group (explosive detection dogs and colon cancer detection dogs), who performed a total of 368 trials, and will include the other dogs in our future studies as their adaptation to samples scenting takes more time. The percentages of success of the dogs to find the positive sample in a line containing several other negative samples or mocks (2 to 6) were 100p100 for 4 dogs, and respectively 83p100, 84p100, 90p100 and 94p100 for the others, all significantly different from the percentage of success that would be obtained by chance alone. We conclude that there is a very high evidence that the armpits sweat odour of COVID-19+ persons is different, and that dogs can detect a person infected by the SARS-CoV-2 virus.