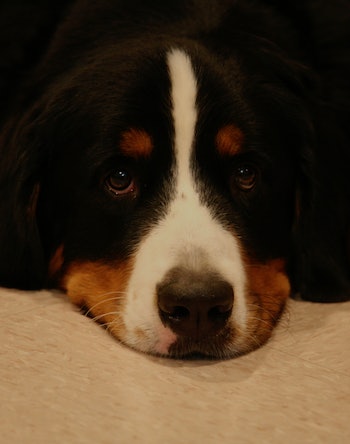 Recently, some the best and the brightest veterinarians and doctors came together to discuss the future of cancer research: dogs. Man’s best friend may, in fact, be the key to accelerating the discovery of new cancer drugs. The crux is researchers will need to aggressively implement early-phase clinical trials for dogs with naturally occurring cancers. The reason this is so valuable? Dogs’ physiology, it turns out, is remarkably similar to yours.

Dr. Amy K. LeBlanc, a staff scientist at the National Cancer Institute and the director of its Comparative Oncology Program, co-authored a paper detailing the issues raised at the workshop: why dogs are the right choice, and what steps need to be taken next. Released Wednesday, the paper makes the case that current animal models and early-phase clinical studies in patients are failing to spur drug discovery. Because canine cancer shares strong similarities to human cancers — combined with a growing understanding of canines at a molecular level — dogs may be our best bet in the diagnosis of new ways to attack cancer.

People have actually been studying cancer in dogs since about the 1960s. Scientists at the time ascertained that dogs’ cancer was similar to cancer in humans, but from a clinical standpoint, veterinarian medicine was still very much in its infancy. As veterinarian medicine has become more sophisticated, researchers have been able to study dogs at a molecular level and understand the biologic basis of their disease.

“It’s not that the field is necessarily new, or the concepts around dogs getting cancer are new — I think it’s just that we finally attracted a critical mass of people and attention,” LeBlanc tells Inverse. “We’re able to now shine a light on the work that is being done.”

LeBlanc’s program works with 22 veterinarian academic centers that employ canine cancer specialists. She emphasizes that the dogs included in the National Cancer Institute comparative oncology trials are getting the best care possible.

“We offer opportunities for the pet owning public to look at nontraditional, new drugs and other efforts that might help,” LeBlanc says. “There’s a lot of evidence that dogs that are assigned to a clinical trial actually get better veterinarian care than if they were just being treated with standard procedures.”

Now, for the program to really make an impact, it needs to study more dogs. Yet the vast majority of people who own dogs don’t realize they have access to clinical trials. LeBlanc and her team hope to create an accessible clinical trial registry for pet owners and vets. Ideally, dogs’ tumor samples will reveal new genomic variants missing from previously banked tissues.

“There is a fundamental lack of education on the part of a lot of people in science about what veterinary medicine is and what we do, how we’re trained, and what we’re capable of,” LeBlanc says. “Even though I work at the NIH, I run into people who have no idea that dogs get cancer.

“When you’re up against that fundamental lack of knowledge, it’s really tough to get that what we’re doing, as veterinarians, is not just spay-neuter clinics and vaccines. We have a have a huge amount of expertise and we’ve studied animals in the context of their human counterparts from the very beginning.”

The spectrum of cancers that develop in dogs share similarities to human cancers, primarily at the histological level. That is, they respond or resist conventional therapies in similar ways. LeBlanc and others who have studied dogs’ and humans’ response to cancer drugs observe striking genetic similarities.

LeBlanc cautions this doesn’t mean a particular human cancer is identical to a dog’s. Melanoma, for example, is a devastating disease in humans. It’s more benign when it happens in the skin of dogs — unless it’s occurring at the mouth or nail bed junctions. LeBlanc is hoping to find out why these different reactions occur.

LeBlanc says the next big hurdle is pinpointing the genomic characterizations of the disease in dogs. While 30,000 human cancers have been genomically profiled, the same sequence data has been published for only 50 canine cancers. To get a better understanding of the molecular landscape, LeBlanc says, experts need more money.

She finds dogs to be a logical choice for cross-species trials. Their physiology, temperament, and long history in medical research make them an ideal subject. And, unlike humans, dogs with cancer can enter clinical trials whenever their owners see fit. Humans, by contrast, have to fail the standard of care before they can be considered a good candidate for clinical trial.

LeBlanc’s goal is to continue to advocate and educate “every part of society who is affected by cancer” about the benefits of these trials, which she notes, “is essentially everyone.” If it works out, we may have new drugs to fight human cancers — and new specialized drugs to help our furry friends, as well.