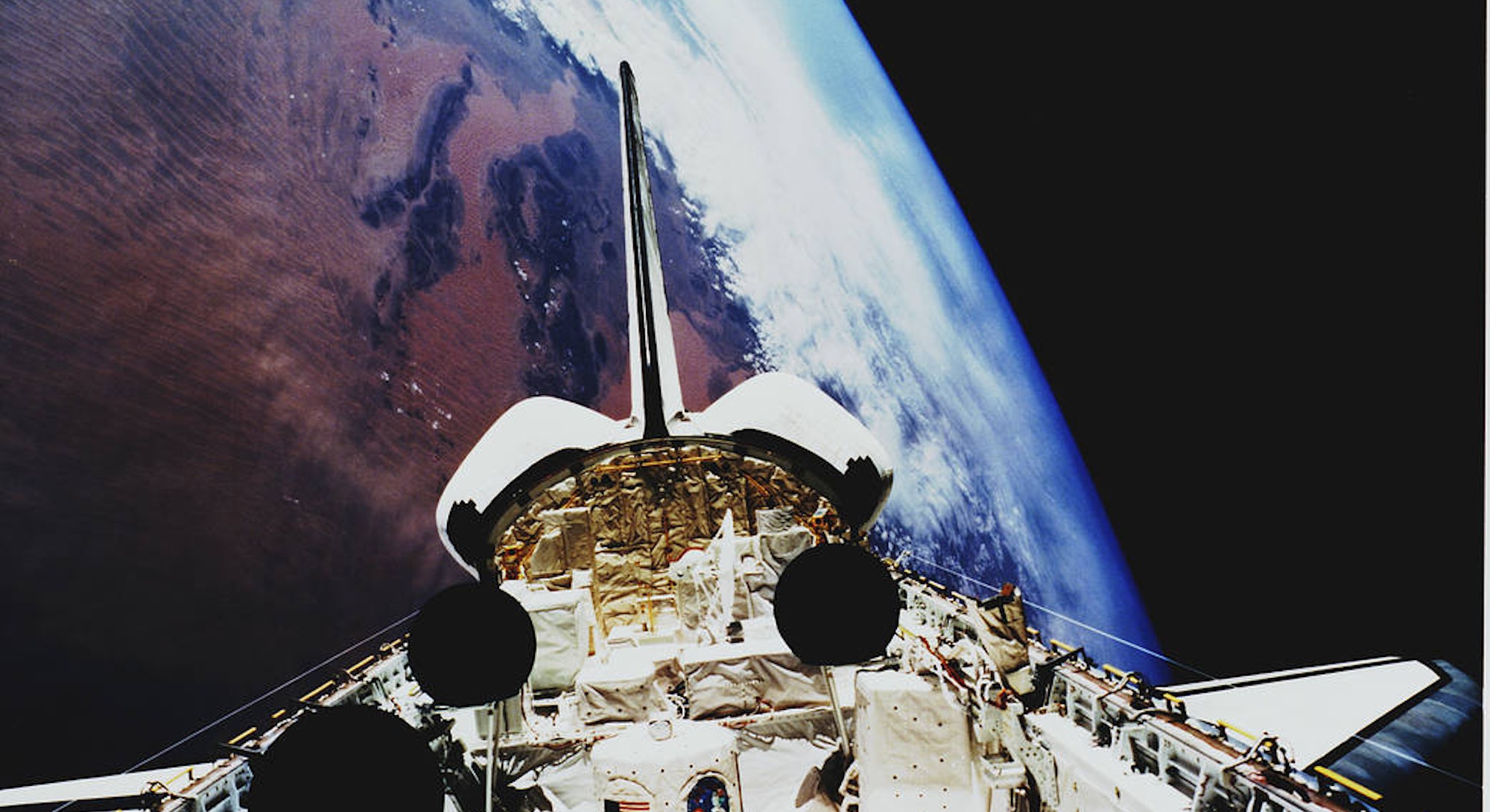 The International Space Station is held up as the bastion of international scientific cooperation: An orbiting testament to human endeavor and our ability to put borders and nationalism to the side in the name of exploration. But the ISS did not spring from nowhere.

It owes its existence in part to another, older space station — one that launched 30 years ago and which is often forgotten in the annals of space history: ATLAS.

Launched to space on March 24, 1992, with its first crewed mission, ATLAS-1, the Atmospheric Laboratory for Applications and Science provided scientists with some of the first data about our planet’s atmosphere ever. Since then, these data have been used to help shape our understanding of our planet and how we affect it.

ATLAS was a joint mission between NASA and the European Space Agency (then the European Space Research Organisation). Together, they agreed to engineer and construct a science laboratory that could be used in space voyages to study Earth and its atmosphere with the same degree of objectivity as we would an alien planet.

A blueprint to study Earth

ATLAS-1 was the first of nine crewed ATLAS missions and it lasted for nine days. In truth, it was the first crewed mission to study Earth in history. Together, they were the first part of NASA’s Mission to Planet Earth, a program to study Earth as a single dynamic system. ATLAS provided data that illuminated our understanding of both natural and human-influenced atmospheric dynamics.

The nine missions took place over a single 11-year solar cycle; this period of cosmic time correlates to the orientation of the Sun’s magnetic field, which, every 11 years or so, reverses in direction when the surface of the Sun approaches a maximum number of sunspots.

Brian Duffy, a pilot on ATLAS-1, recalls in Missions During Space Shuttle Missions STS-45: Mission to Planet Earth the momentous feeling of being a part of ATLAS-1:

“Before the first orbit was over, we knew it was going to be an incredible week. Less than an hour before, we had been lying on our back on Launch Pad 39A, anxiously awaiting the launch of the Space Shuttle Atlantis. The entire crew of seven knew how lucky we were to be a part of this first manned Mission to Planet Earth. The years of dedicated work and detailed planning of this ambitious mission by the large Atlas-1 team were finally going to pay off.”

ATLAS-1 was installed and operated on the Space Shuttle, developed as part of NASA’s Space Transporation System, which stemmed from the Apollo programs. After man landed on the Moon, public interest in space travel waned; the Space Transport System was one of the only surviving remnants of the NASA program from that heyday.

STS-45 — which launched ATLAS-1 — was the 46th Space Shuttle program mission and the eleventh mission for the Atlantis Space Shuttle. But it was the first space flight that included a space-based laboratory, ATLAS-1.

What did ATLAS-1 study?

Within a brief 8 day and 22-hour time window, the mission completed 143 orbits of Earth, traveling a total distance of approximately 3.2 million miles.

An international collaboration, ATLAS-1’s 12 instruments were provided by the U.S., France, Japan, the Netherlands, Germany, and Belgium. The crew of seven people was made up of six astronauts from the U.S., and one Belgian astronaut from the ESA. Astronaut and geologist, Kathryn Sullivan, the first woman to complete a spacewalk, was the Payload Commander of ATLAS-1. It was her third and final mission.

ATLAS-1 took measurements of Earth’s atmosphere and its electric and magnetic fields to try and understand how all of these elements interact with each other. The mission also tried to measure the amount of energy in sunlight. It even sought to identify unknown sources of ultraviolet light in the universe.

But one of ATLAS’ legacies matters acutely today: The mission set tighter constraints on the values of atmospheric gasses like carbon dioxide and methane that increase the greenhouse effect, as well as chlorofluorocarbons that reduce ozone. Throughout the 11 years that ATLAS ran, it tracked how these gasses and their effects varied depending on both human activity on Earth and the Sun’s activity, too.

Some of the most stunning observations from ATLAS-1 did not come from any of the major instruments installed in the Spacelab. Rather, these observations came from simple handheld cameras.

Steven Ackleson, an oceanographer for the U.S. Navy, was head of Earth Ops at NASA during the mission. For years, astronauts had been taking photos from space with cameras, but during Ackleson’s time at NASA, these photographs were made with specific intent: To better understand Earth’s natural processes and how humans drive changes on Earth — but there is still so much information that these images hold.

There are thousands and thousands of photographs from most of the manned missions to space; it’s still a largely untapped resource, Ackleson says.

“It’s just so much information because you see things changing,” says Ackleson. “Over the course of several decades of manned spaceflight, you see changes, you see deforestation, you see increases in suspended sediments going down into the coastal waters because there’s more erosion going on.”

“You see expansive urban areas, you see changes in air quality. Those are all human-induced changes, but then you see the environmental things like wave structures in the ocean, in the atmosphere, and it’s just a tremendous library.”

The period in which ATLAS-1 launched was particularly stark in this sense: Thirty years ago, ATLAS-1 launched not long after the Persian Gulf War. At the time, the gulf was polluted with up to 6 million barrels of crude oil from various facilities along the coast of Kuwait. The United Nations and its partners designated a multinational council of scientists to survey the extent of the damage from the oil contamination.

In a 2008 study titled, “Astronaut observations of the Persian (Arabian) gulf during STS‐45,” Ackleson and his co-authors, including astronaut Kathy Sullivan, used 111 color photographs of the Persian Gulf from ATLAS-1 to better measure the extent of the oil spills. The photographs revealed “water circulation along the entire coast of Iran and the Strait of Hormuz, coastal wetlands and shallow‐water habitats, and sticks appearing in the sunglint pattern, which appear to be oil,” the study states.

The “sunglint pattern” is essentially the way the sunlight reflects off the water at different angles — it is not visible via satellites, only handheld cameras. In fact, satellites are engineered to exclude reflective features from the Sun. Yet in truth, the sunglint feature is immensely useful in studying anthropogenic effects on the ocean, but also natural processes.

Ackleson and the NASA team first identified the sunglint pattern during the ATLAS-1 mission when he noted a 500-kilometer-long lineation running north-south in the equatorial Pacific Ocean after an El Niño — a seasonal weather event — when the winds stop blowing and the water stops moving.

What they were able to see was that the ocean’s surface waters began to move again, but were met with resistance from subsurface, stagnant water, creating huge eddies. Similar phenomena caught in photographs by the crew led to the discovery of unusually high concentrations of plankton in the middle of the Pacific Ocean that would have otherwise remained undetected.

Brian Duffy, the pilot on the mission, recollects in his book that the photographs were, ultimately, one of the most satisfying and fruitful aspects of the mission.

“The entire crew is indebted to the many people who prepared us to bring back the best Earth observation photographs possible. We believe the many hours they spent teaching us the objectives, tools, and techniques paid off.”