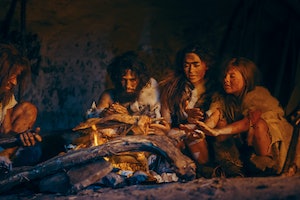 We go way back

When you think of Siberia, you probably conjure up images of a sparsely populated, icy tundra — albeit one that's less frozen these days.

But from this remote place came a group of ancient peoples whose DNA may have changed the course of human history.

According to research published Wednesday in the journal Science Advances, scientists were, for the very first time, able to trace the dramatic migration of different ancient Siberian peoples — individuals who share DNA with living Inuits and Native Americans.

Some background— By analyzing ancient remains from five different regions in Russia and Northeast Asia, researchers produced genetic data for 40 individuals from the Late Upper Paleolithic to the Medieval era.

The oldest of the ancient people dates back to nearly 17,000 years ago, while the youngest was alive only 550 years ago.

The earliest of these northeast Asian ancestors came of age after the Last Glacial Maximum (LGM), which ended 18,000 to 20,000 years ago. LGM refers to a period of time when the ice sheets reached their peak mass during the last Ice Age.

What's new — Things were pretty frosty up in ancient Siberia. However, while previous studies stated that the LGM reduced population numbers in northeast Asia, this new data suggests a complex and dynamic flow of ancient people took place despite the LGM.

The researchers began by analyzing the remains of the oldest individual in their group: a 16,900-year-old female known as Khaiyrgas-1, who was excavated from Khaiyrgas Cave. This cave is one of the oldest-known locations of post-LGM human occupation in Siberia.

Kılınç and her team found that Khaiyrgas-1 shares some DNA with Selkups, a modern-day group in Siberia that speaks the Uralic language. This implies a direct line from the ancient past to the present.

They also found some shared DNA between Khaiyrgas-1 and indigenous people in North America, such as the Chane, Guarani, and Karitiana.

However, the history of migration makes it difficult to confirm a direct link between Khaiyrgas-1 and Native Americans.

According to Kılınç, about 15,000 years ago, there was a global warming period known as Bølling–Allerød, which followed the last Ice Age.

"Around 15,000 years ago, during the Bølling–Allerød warming period, human groups represented by [Khaiyrgas-1] retracted from the area," Kılınç says. "Therefore, we cannot make clear statements about a direct link between people in the Americas and Khaiyrgas-1."

However, another ancient individual in the study that can give us a greater degree of confidence in this ancient Siberian-American connection: Kolyma_M.

According to Kılınç, Kolyma_M carries "genetic components which are present in present-day Native America populations."

Using this gene sequencing, the researchers also identified the ancient Asian ancestors of the Paleo-Inuits, who died out 700 years ago prior to the existence of modern-day Inuit people.

About 8,500 years ago, a new group of people with East Asian ancestry settled around the lake, bringing a new set of DNA compared to the people who lived there previously.

Researchers also found dwindling population sizes starting around 4400 years ago. Low population sizes in two of the study's research areas— Cis-Baikal and Yakutia — could possibly signal the impacts of climate change, which could have led to the collapse of these ancient populations.

Their findings show how much we can learn about the rise and fall of ancient peoples — about ancient history — through modern gene-sequencing technology.

Finally, the researchers even brought the story full circle back to 2021 through an analysis of an ancient plague bacterium that may have brought down some of the individuals in the study: yersinia pestis (Y. pestis).

"We observed a decrease in the genetic diversity and effective population sizes after the time that the 4,400-year-old individual from Cis-Baikal who found to have been affected by yersinia pestis lived. So, it might be possible to speculate about a plague pandemic during those times in that part of the world," Kılınç says.

But more data is needed to say whether an ancient pandemic wiped out these Siberian peoples, Kılınç says.

What's next — This research brings exciting new insight into the complex genetic history of an ancient people that shaped the world through their DNA, which ultimately made its way to the Americas.

But scientists still need to uncover new data to fully uncover the migration patterns of these Siberian ancestors.

Abstract: We present genome-wide data from 40 individuals dating to c.16,900 to 550 years ago in northeast Asia. We describe hitherto unknown gene flow and admixture events in the region, revealing a complex population history. While populations east of Lake Baikal remained relatively stable from the Mesolithic to the Bronze Age, those from Yakutia and west of Lake Baikal witnessed major population transformations, from the Late Upper Paleolithic to the Neolithic, and during the Bronze Age, respectively. We further locate the Asian ancestors of Paleo-Inuits, using direct genetic evidence. Last, we report the most northeastern ancient occurrence of the plague-related bacterium, Yersinia pestis. Our findings indicate the highly connected and dynamic nature of northeast Asia populations throughout the Holocene.

More like this
Science
6.22.2022 8:26 PM
Yes, there are mites living on your face — and they can poop, a new study finds
By Allison Parshall
Science
6.21.2022 10:45 AM
Ancient stalagmites point to a massive drought that upturned 6th century Arabia
By Allison Parshall
Science
6.14.2022 11:00 AM
200,000 years ago, ancient humans developed language — what did they say?
By Mark Pagel and The Conversation
Related Tags
Share: