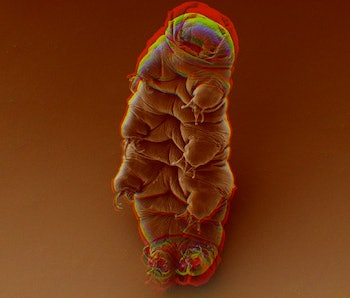 Our visits to the Moon reveal that our closest neighbor has no life on it — or, should we say had? Earlier this year, humans may have inadvertently left some on the lunar surface by accident.

On April 11 2019, the Israeli lander Beresheet crashed on the Moon with several thousand dehydrated tardigrades on board. The millimeter-long and eerily cute ‘water bears’ were part of a lunar library put together by the Arch Mission Foundation, a nonprofit intent on archiving everything on the planet just in case we need a back-up copy some day. Other items on board included a copy of the entire English-language Wikipedia, and a sample from India’s sacred Bodhi tree.

But despite the impact, scientists believe that if anything survived the crash intact, it may well have been the tardigrades. The microscopic creatures were sandwiched between micron-thin sheets of nickel and suspended in epoxy, a resin-like preservative that acts like a jelly — potentially enough to cushion their landing.

This wouldn’t be the first time tardigrades have survived space’s harsh conditions.

In September 2007, two species of dehydrated tardigrades were exposed to the dehydrating vacuum of space, solar radiation, or both on board NASA’s Foton-M3 mission. Back on Earth, after they were rehydrated, the tardigrades that were only exposed to the vacuum survived as though nothing had happened. Some of them even reproduced afterwards, according to a paper published in 2008.

But the chances of a little colony of water bears on the lunar surface are slim: The tardigrades are unlikely to come in contact with water on the Moon, meaning they will likely not be rehydrated.

Since the crash, the Arch Mission Foundation announced that it wants to send human DNA samples to the Moon. In September 2019, the group invited people to send swabs of their DNA to be preserved on the Moon (Unfortunately you don’t get to blast your cheek swab into space for free — the privilege of joining the dried-out tardigrades on the Moon cost $99.)

As 2019 draws to a close, Inverse is counting down our top 20 space stories from 2019. You can read them all here. Some are wild, some are mind-boggling, and others will change how you think about the universe. This has been #2. Read the original story here.