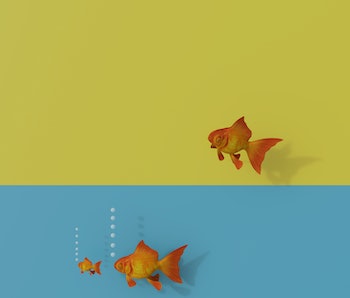 Getting cuckolded can be a spouse’s worst nightmare. The term refers to when a wife cheats on their husband, gets pregnant, and raises the child with her oblivious husband as the “father.” This kind of betrayal isn’t confined to humans — it happens throughout the animal kingdom. And as scientists discovered in January 2019, it might not always be a problem for the victim.

They reported that the sexual behavior of Variabilichromis moori fish upends the conventional wisdom that cuckolding always puts males at a disadvantage. The findings were published in the journal BMC Biology in January.

Variabilichromis moori fish live in Lake Tanganyika, one of Africa’s Great Lakes. They are a study in contradictions: they’re both socially monogamous and rampant cuckolds.

Before a full moon, the female fish pair up with a male, lay hundreds of eggs, and wait for them to be fertilized by their chosen mate. But more often than not, another fish — frequently a relative of their desired baby daddy — sneaks in to fertilize the eggs before the chosen male gets there.

Examining babies from 70 broods, researchers found that more than 80 percent of fertilized eggs weren’t fertilized by the expected father. More often than not, the real daddies were relatives of the supposed father.

“At first glance, this is evolutionarily puzzling because when males are related, we typically expect them to compete less with one another, not more,” said study author Kristina Sefc at the time.

But the fish may be onto something, at least in this social context, the researchers said. If everyone is being cuckolded anyway, then maybe the fish want the baby daddy to at least be family — that way some of their genes will get passed along to the offspring regardless.

“This ‘banding together’ of related males makes sense, however, when spawning events involve many males, including lots of unrelated males,” said Sefc. “Then, the male relatives essentially work together to compete against the host of unrelated males.”

If nothing else, the study gives a new meaning to the phrase, “band of brothers.” In human social circles, this practice might get messy, but it seems to work for the fish.

As 2019 draws to a close, Inverse is counting down the 25 science stories from this year that made us say “WTF.” Some are incredible, some are icky, and some are just plain strange. This has been #20. Read the original article here.

More like this
Science
5.13.2022 12:00 PM
The greatest sci-fi epic on HBO Max reveals a provocative scientific debate
By Tara Yarlagadda
Science
13 hours ago
Look: Hidden fossils reveal a microscopic creature that may be resilient to climate change
By Jennifer Walter
Science
12 hours ago
How do dolphins maintain their glowing skin? A study reveals the surprising answer
By Jennifer Walter
Related Tags
Share: